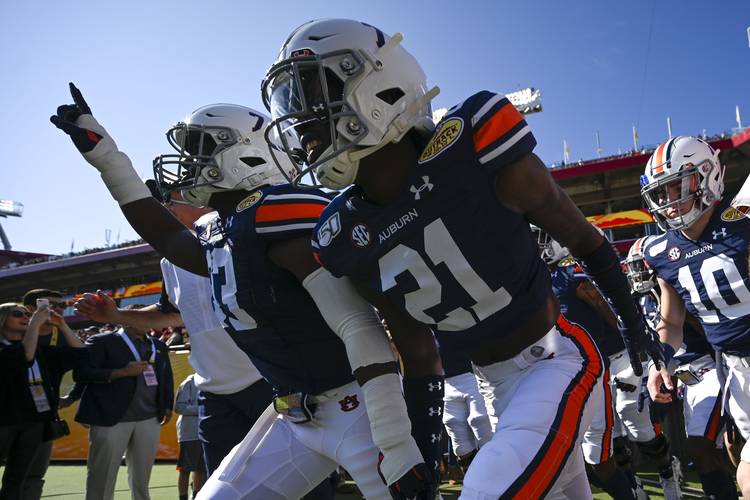 The 2020 college football season is less than two months away. Right? As it approaches with question marks, our 12th annual countdown series of our preseason Top 25, as selected by the American-Statesman sports staff, breaks down who we think are the top teams in the country.

The Tigers managed to disappoint last year even with wins over Alabama and Oregon. The defense carried the load last year, but it’ll be up to the offense and sophomore quarterback Bo Nix till a young defense matures. But this could be Auburn’s year; the regular-season finale against Alabama is always the biggest game of the year but entering the season, the Crimson Tide aren’t as overwhelming a favorite as usual. Nix showed promise as a freshman and won’t be scared of any team in the SEC — he’s already notched a win over Alabama and Auburn lost by only three points to eventual national champion LSU. There is no clear favorite in the SEC this year.

Auburn was ranked 19th in our preseason poll last year.

It was an offseason of change for the offense. Chad Morris, formerly of Lake Travis High School, Clemson and Arkansas, is the new offensive coordinator. Jack Bicknell Jr. takes over as the offensive line coach, and running back JaTarvious Whitlow left the program, leaving D.J. Williams as the most likely candidate to lead the team in carries. Nix also can run with the ball. Defensively, the Tigers must replace Brown and Davidson, two of six Tigers who went in the NFL draft. The linebackers, led by K.J. Britt and sophomore Owen Pappoe — a former five-star recruit — should be the strength of the defense.

Non-conference impact: The SEC, along with the ACC and the Big 12, has not yet announced plans to cancel out-of-conference games despite the pandemic. That could give teams like Auburn a real chance of competing for spots in the College Football Playoffs if teams from the Big Ten and Pac-12 end up with devalued seasons. A team like Auburn could win a pair of out-of-conference games, finish second in the SEC West and still likely get backing for a spot among the four most deserving teams. Auburn’s three non-conference matchups are vs. Alcorn State, vs. North Carolina (in Atlanta), vs. Southern Miss and vs. UMass.

Here’s the catch: The most potent wide receiving duo in the SEC might not be located at Alabama or LSU, but at Auburn with Williams and Schwartz. Williams came into his own in 2019, ending the season with a team-high 59 receptions for 830 yards and eight touchdowns. Schwartz possesses the track speed required to stretch a defense. Nix doesn’t lack arm strength, or confidence, so Morris could develop a strong passing attack in his first season as offensive coordinator.

Schedule watch: It’s still not clear whether the SEC will link up with the ACC and Big 12 to schedule pre-conference games to serve as replacements for all the lost matchups because of the pandemic. A move to a conference-only schedule would hurt the Tigers, who were going to avoid Florida and an improving Tennessee team. Auburn must travel to Alabama, but does get Texas A&M and LSU at home. The Tigers close their SEC schedule with tough matchups against LSU and Alabama.

Where Auburn ranked nationally in various statistical categories last season — and how the Tigers ranked in 2018.

This school’s head coach has coached at five different schools in the state of Texas, two as a head coach.