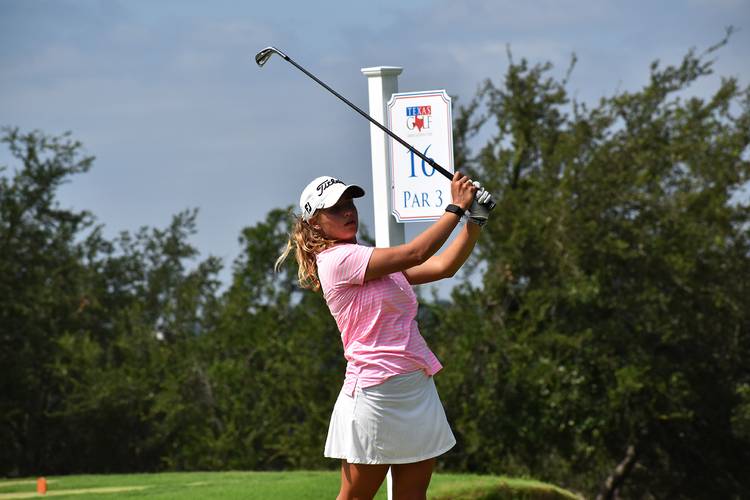 Bentley Cotton arrived at the University of Texas Golf Club at the start of the 99th Women’s Texas Amateur with zero expectations. She left as part of Texas golf history.

The recent Westlake graduate and incoming freshman at the University of Texas scored a 1-up victory on Friday over Texas A&M freshman and Vandegrift graduate Makenzie Niblett on Cotton’s new home course as part of the UT women’s golf program.

“No better place to win it,” Cotton said with a smile. “It was unbelievable out there today.”

In a battle of two Austinites, Cotton struck first with a birdie on the second hole of the classic Hill Country course built by Bechtol-Russell in 2003. Although the championship match had several momentum swings throughout the day, Cotton never trailed. She had an answer for every shot Niblett threw at her.

When Niblett won the par-3 eighth hole with a par to draw even, for example, Cotton poured in a 6-footer for birdie on the next hole to regain the 1-up lead. Over the next hour and a half, the two supremely talented competitors displayed vintage ball-striking and deft touch on the greens. Niblett won the 10th hole; Cotton won the 11th and 12th.

It went that way throughout the back nine. By the time they reached the par-4 17th hole, Cotton held a 2-up advantage. After Cotton’s approach shot trickled off the back of the green, Niblett eyed an opening.

She had 102 yards to the flagstick from a perfect lie in the fairway.

“I knew I had to get it close,” said Niblett, who grew up near the UT Golf Club in Steiner Ranch and estimated she’s played the course at least 250 times. “I saw that she had gone over the green, so I knew it was the perfect opportunity to go at the flag.”

Niblett flighted her 48-degree to the right and just past the hole. Her ball dug in, spun back and disappeared into the hole. It was her second hole-out for eagle in as many days; she did the same thing Thursday on the par-5 ninth from 89 yards.

Despite the dramatic eagle, Cotton still owned a 1-up lead as the two players headed to the 18th tee. Cotton made a routine par that forced Niblett to make an 18-foot birdie putt to extend the match. Niblett’s putt just missed, giving Cotton the 99th Women’s Texas Amateur victory.

“We went back and forth a lot today,” said Cotton, who made it to the round of 32 at the 2019 U.S. Women’s Amateur and helped Westlake win two Class 6A state championships during her preps career. “I was a little nervous on 18, but I just wanted to make par. I kept breathing and told myself, ‘You can do it.’ ”

She did do it. Now Cotton’s name will be engraved on the Women’s Texas Amateur trophy alongside the likes of World Golf Hall of Fame members Babe Didrikson, Betty Jameson and Sandra Haynie to name a few.

The 99th Women’s Amateur featured one of the strongest fields in recent memory. Five of the top 100 players in the World Amateur Golf Rankings participated.