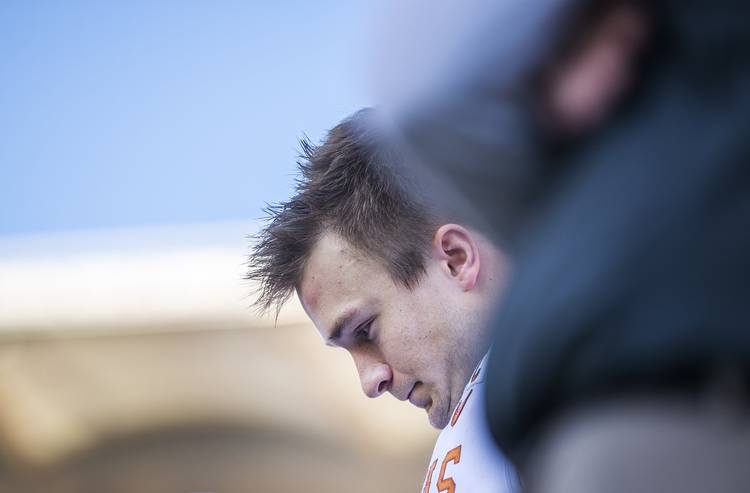 Texas quarterback Sam Ehlinger enters his final season this fall. He'll likely leave as one of the school's three most prolific quarterbacks ever along with Colt McCoy and Vince Young. (Ricardo B. Brazziell/American-Statesman)

The 2020 college football season is less than two months away. Right? As it approaches with question marks, our 12th annual countdown series of our preseason Top 25, as selected by the American-Statesman sports staff, breaks down who we think are the top teams in the country.

It’s now or never, right? Entering his fourth season, coach Tom Herman has put together four strong recruiting classes. He revamped the coaching staff this offseason. He’s got a senior quarterback who should finish second in most statistical categories in the UT record book. The offense has a solid left tackle and some talented threats out wide. The revamped defense brings some welcome changes, like turning Joseph Ossai into an edge pass rusher. In Mack Brown’s fourth season, Texas broke through for 11 wins and played for the Big 12 title. This is the season Herman himself has pointed to as the breakthrough year. It has to happen, right?

Texas was ranked No. 9 in our preseason poll last year.

There will be plenty of attention focused on Herman’s two new coordinators — Mike Yurcich (offense) and Chris Ash (defense). Yurcich isn’t new to the Big 12; he worked for six seasons at Oklahoma State. The Cowboys averaged 38 points per game during his six-year stay in Stillwater. He’ll be the primary play-caller as Herman returns to a more CEO-like role. … Ash has worked with Herman three times during their respective careers. He was the co-defensive coordinator for Ohio State’s national title run in 2014. … The Horns signed the nation’s eighth-best recruiting class, and there’s incredible excitement over five-star RB Bijan Robinson. … Michigan WR Tarik Black also arrived as a grad transfer, giving UT a solid weapon. He has 40 career receptions for 507 yards, but also had multiple foot injuries.

Healthy backfield?: One of the rare positives of getting spring football canceled was that it limited the amount of punishment on the running backs. It was hard to keep anyone healthy last season, and coaches even moved 2019 quarterback signee Roschon Johnson to running back to help. Keaontay Ingram and Johnson are the incumbents, but Robinson is expected to get playing time, too. UT averaged 176.5 rushing yards per game last season, but a lot of those came from Ehlinger, too.

New-look defensive line: The biggest change on the defensive side is Ossai’s move from linebacker to a stand-up hybrid role called the “Jack” position. He played off the edge in the Alamo Bowl and went wild. The Horns have Keondre Coburn and Ta’Quon Graham but they need more beef to emerge. The defensive line produced almost no consistent pressure on quarterbacks last season. That must change.

‘DBU’ shakeup: The defensive backfield has been making headlines all offseason for both their play and their actions. Caden Sterns and Josh Thompson were two vocal leaders when a group of players marched to the State Capitol in June to protest racial injustice. Those two, along with B.J. Foster, will help fill the void left by Brandon Jones’ departure. There’s a host of talented corners to choose from. Ash and new corners coach Jay Valai have lots of talent at their disposal.

Where Texas ranked nationally in various statistical categories last season — and how the Longhorns ranked in 2018.

This school’s mascot? An Anas Platyrhynchos, for you science-niks.

The Dotted Line: Which Big 12 freshmen could make impacts in 2020?