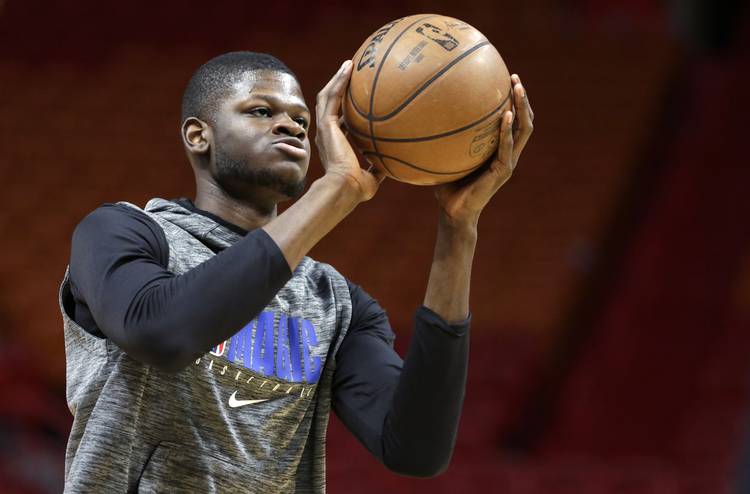 Orlando Magic center Mo Bamba warms up before the game against the Miami Heat earlier in the season. Bamba told a group of Magic season-ticket holders earlier this month that he had gained 28 pounds of muscle during the coronavirus shutdown. [Rhona Wise/USA TODAY]

Orlando Magic second-year center Mo Bamba was on a mission during the NBA coronavirus shutdown. He came into the league as a slender 7-footer with athleticism that enabled him to block shots and pop out on the perimeter for occasional 3-point attempts.

Bamba, however, wanted to add more to his game, so he focused on adding weight to his 230-pound frame. He figured adding bulk and muscle to his already athletic body would give him even more of an advantage in the paint going up against bigger NBA players.

“He outweighs me by like 20 pounds right now and last year, I think, I outweighed him,” said the 6-foot-9, 233-pound Birch. “He’s definitely stronger out there and he’s noticeably bigger. But also, the one thing about him is that he is able to maintain his strength but to also have the same athleticism.”

As Birch said, Bamba’s weight and muscle gain is quite obvious. That could be seen Sunday during a post-practice videoconference interview. Bamba told a group of Magic season-ticket holders earlier this month that he had gained 28 pounds, part of which could be seen just in the size of his upper arms, as well as in his face.

“My mentality the whole entire time we were quarantined was to gain an inch every day and it really took, literally, every day going through it to get to where I am,” Bamba said Sunday. “It took changing my diet, it took intense workouts and it took leaning on the Magic’s strength and conditioning staff to provide a plan for me.”

Bamba said a personal chef, a strict diet of five to six meals a day and constant workouts with weights were the key to his three-month transformation.

“They brought in literally like half the weight room and I didn’t have anything else to do but to lift and to work on my diet,” Bamba said of how he transformed his home into a makeshift weightroom.

He said he already can tell, just five days into practices during the NBA restart, that he’s stronger on the floor, yet he still has been able to maintain his mobility.

It also took a complete transformation of his mindset to accomplish the goals he had set for himself.

“It definitely wasn’t easy. It was something that I had to really work at every single day,” Bamba said. “I had to make myself uncomfortable. I had to wake up a few times at three or four o’clock in the morning just to get some extra calories, an extra meal. I had to wake up early to get that early big breakfast.

“It was definitely uncomfortable at first but, as I’ve gotten used to it, it became a lot easier.”

Magic coach Steve Clifford said he has also seen the difference, but how that translates to games remains to be seen.

“He’s noticeably bigger and it’s just hard to tell [the impact of his weight gain],” Clifford said. “Everything is over time, so we’ll see as we keep going forward.”

Bamba also will have to do specific workouts during the season to maintain his weight and muscle gain.

“Initially the goal was to get to 240 and that happened really quick with the change of diet,” Bamba said. “Then I started to approach the 250 mark and I was like, ‘All right, this is around the weight that I feel comfortable at,’ and once I got a little bit past 250, I was like, ‘OK, this is where I’m gonna try to cap it.’