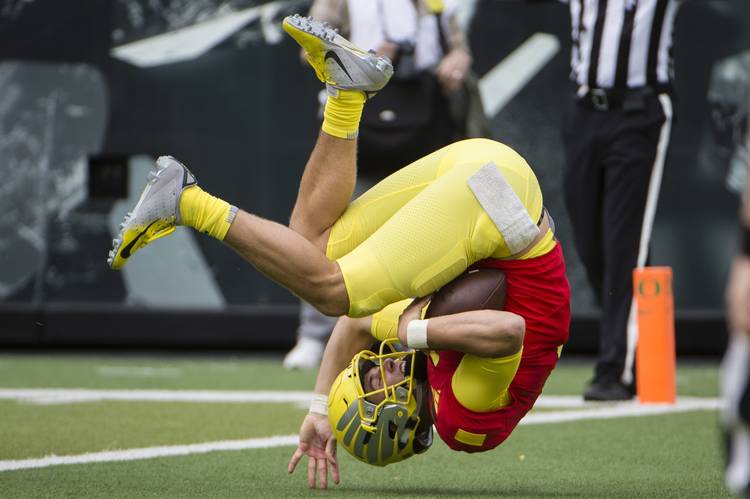 Last season, the Ducks won the Pac-12 and closed with wins over top-10 teams Utah and Wisconsin. Fans, however, may have spent some time this offseason thinking about what could have been. Oregon’s 27-21 and 31-28 losses to Auburn and Arizona State kept the Ducks out of the College Football Playoff picture. Now, due to the coronavirus pandemic, Oregon doesn’t have any non-conference games on this year’s schedule. But whenever the defense of its conference title does gets underway, the Ducks will have a new quarterback leading the way.

Oregon was ranked No. 8 in our preseason poll last year.

Offensive coordinator Marcus Arroyo left to become head coach at UNLV; he was replaced by former Mississippi State head coach Joe Moorhead, who’ll be the Ducks’ OC and quarterbacks coach. Oregon also added cornerbacks coach Rod Chance and receivers coach Bryan McClendon. … The Ducks signed three five-star defensive prospects in their 2020 recruiting class that ranked 12th nationally (the nation’s No. 3-rated cornerback and the top two-rated inside linebackers). And the 2021 class is currently ranked fifth. … in wake of the national conversation on race, Oregon and Oregon State announced this summer that their annual rivalry game will no longer be called the Civil War.

Who’s next?: Herbert, who was drafted sixth overall by the Chargers, was the fifth Ducks quarterback to be taken in the top 10 (No. 1 George Shaw in 1955; No. 3 Akili Smith in 1999; No. 3 Joey Harrington in 2002 and No. 2 Marcus Mariota in 2015). Now Oregon must look for Herbert’s successor. Cristobal said in April that Shough, a redshirt sophomore, “entered the spring as the starter; he leaves the spring as the starter.” Anthony Brown, a graduate transfer who started 28 games at Boston College, and four-star signees Jay Butterfield and Robby Ashford are other options.

Quack attack: The Ducks likely did not receive Christmas cards from many quarterbacks in 2019. Led by the instant impact of Thibodeaux, who was the highest-rated recruit to ever sign with Oregon, the Duck’s defense ranked 13th nationally in sacks. And sacks weren’t the only way that Oregon frustrated quarterbacks during Andy Avalos’ first year as the defensive coordinator. Of the 130 FBS-level defenses, only Florida Atlantic (22) intercepted more passes than Oregon’s 20. The Ducks bring back nearly 71% of their 41 sacks and 85% of their picks.

Altered schedule: When the Pac-12 pulled the plug on non-conference games, Oregon lost out on a series of intriguing home dates. The Ducks were going to open with North Dakota State, which has won the last three FCS national titles. The following week, Autzen Stadium would have hosted Ohio State as well as many of the nation’s eyeballs. A game against Hawaii also was axed. The trip to Colorado on Sept. 26 now marks the beginning of Oregon’s season, and home games still exist against Washington, Stanford and USC teams that have won four of the Pac-12’s last five titles.

Where Oregon ranked nationally in various statistical categories last season — and how the Ducks ranked in 2018.

This school battles the same team for the “Jeweled Shillelagh” trophy. But not this year …

The Dotted Line: Which Big 12 freshmen could make impacts in 2020?