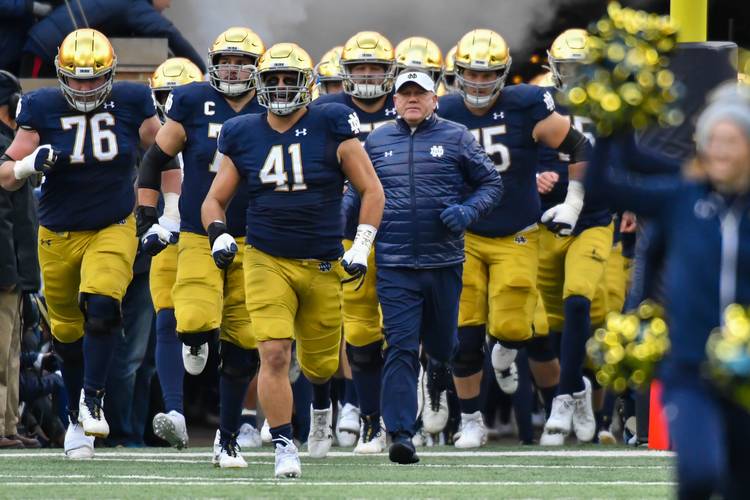 Notre Dame Fighting Irish head coach Brian Kelly runs onto the field with his players before last year's game against Virginia Tech. The Irish are 33-6 over the past three years. (Matt Cashore/USA Today)

The Fighting Irish face unique challenges because of the pandemic. Several conferences are moving to conference-only schedules, which leaves Notre Dame — an independent — without many options for potential opponents. Already, the scheduled matchups with Stanford, Wisconsin and USC have been scuttled. The ACC, however, has not yet called off non-conference games so the Nov. 7 showdown with Clemson remains the biggest game on the schedule; a shortened season with fewer out-of-conference games could mean that game’s winner will hold an advantage over schools without that signature non-conference win. Notre Dame has won 10 or more games in four of the last five years and should again be among the national title contenders with a senior quarterback and one of the country’s top offensive lines. Notre Dame’s title title chances will come down to its defense and scheduling conflicts.

Notre Dame was ranked No. 7 in our preseason poll last year.

About the Fighting Irish

In all, six players were taken in the NFL draft; the Irish must replace two stars on each side of the ball — the passing game could be impacted without Claypool and Kmet, who were top targets last year, and the defense lost players who accounted for 14 sacks and 22.5 tackles for loss. But getting Ian Book, a two-year starter, back for this season was a pleasant surprise. He led Notre Dame to six straight wins to end last season and took the Irish to the College Football Playoff as a sophomore in 2018.

Calling the shots: Notre Dame parted ways with offensive coordinator Chip Long (now an offensive analyst for Tennessee) in favor of Tommy Rees, the team’s quarterbacks coach and himself a former starting quarterback for Kelly at Notre Dame from 2010-13. His first game calling plays was Notre Dame’s bowl win over Iowa State. The Irish scored 33 points. Rees gets to call plays as a rookie coordinator with the luxury of a senior quarterback and five returning offensive line starters.

A three-year run: The Fighting Irish are 33-6 over the past three years as Kelly has hit his stride and put Notre Dame back in the national conversation. It’s the best three-year run since Lou Holtz guided the Irish to a 31-5-1 span from 1991-93. But Kelly’s program won’t be considered a true championship contender until it starts winning big games. Last year there were losses to Georgia and Michigan, two years ago the perfect season was ruined by a CFP blowout loss to Clemson, and in 2017 there was a loss to Georgia in the second game.

Altered schedule: The three leading receivers from 2019 are gone, but maybe there will be some relief from the 2020 recruiting class. The program’s three highest-rated signees all could provide offensive firepower in their first years. Michael Mayer was the country’s No. 2 tight end prospect and Notre Dame’s lone five-star signee. And wide receiver Jordan Johnson and all-purpose back Chris Tyree were four-star signees.

Where Notre Dame ranked nationally in various statistical categories last season — and how the Irish ranked in 2018.

This school has four national championships and two Heisman Trophy winners, but doesn’t even rank among the top 15 of college football’s all-time victories list.

Where does Texas turn at offensive line with Tommy, James Brockermeyer off recruiting board?