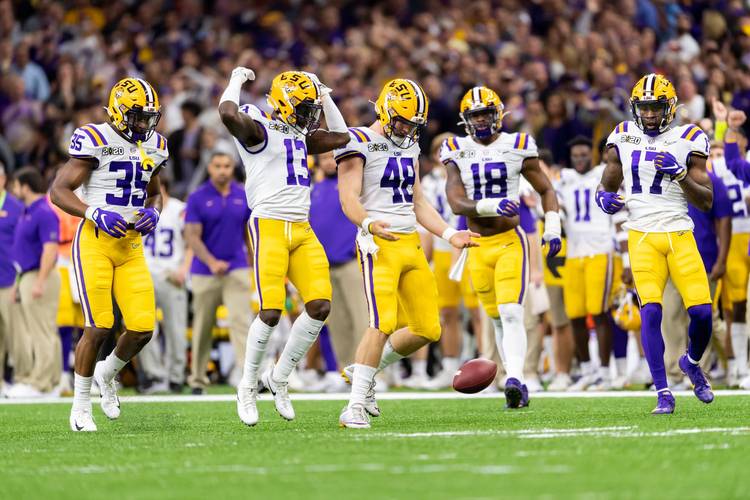 The LSU Tigers said goodbye to 14 players taken in the NFL draft, and then both coordinators had to be replaced. (USA Today)

Do you believe in miracles? How about back-to-back miracles? Not even sure Al Michaels is willing to have that amount of faith in the chance that LSU duplicates last year’s 15-0 miracle run to the national championship, especially after the loss of 15 starters to the NFL draft and graduation, including wholesale departures at linebacker and the offensive line. If Ed Orgeron can fast-forward the development of quarterback Myles Brennan into a workable facsimile of Heisman winner Joe Burrow and manage expectations, there’s no reason the Tigers can’t make a serious charge at another SEC title. The talent is plentiful, but a challenging schedule that sends LSU on the road to Florida, Auburn and Texas A&M and brings Texas to Death Valley could short-circuit title plans.

LSU was ranked No. 6 in our preseason poll last year.

2019: 15-0, 8-0 in the SEC; beat Georgia in the SEC title game, then Oklahoma and Clemson in the CFP to win the national championship

The depth chart wasn’t the only thing decimated on the team roster. Orgeron had to replace both coordinators when defensive wizard Dave Aranda left for Baylor and passing game coordinator Joe Brady moved to the Carolina Panthers. He hired former Nebraska head coach Bo Pelini, who’ll switch to a 4-3 alignment, and former Dallas Cowboys offensive coordinator Scott Linehan, who’ll be in charge of the passing game as quarterbacks coach. … More than 30 players were quarantined in June after testing positive for coronavirus. … Orgeron had an eventful offseason. He filed for divorce from his wife after 23 years a month after the CFP title game, and then he signed a six-year, $42 million contract that makes him the third highest-paid coach behind Clemson’s Dabo Swinney and Alabama’s Nick Saban. … Safety Eric Monroe, a senior from Houston, transferred to Texas Tech; he started only one game but played in 12 last season. … Fourteen Tigers went in the NFL draft, including five in the first round alone. There might be another four first-rounders in 2021.

A show of hands: Tigers wideout Justin Jefferson left early for the NFL in one of the deepest drafts ever for receivers with six taken in the first round. But All-American junior Ja’Marr Chase might have been the best of the lot had he been eligible. He probably qualifies as the fastest and best athlete in the SEC; he averaged 21.2 yards per catch and had 20 touchdowns. Marshall also returns along with promising targets in Races McMath and Jaray Jenkins, not to mention five-star freshman tight end Arik Gilbert. Chase is being projected by most mock draft sites as the first receiver taken in next year’s draft.

The heir apparent: Burrow may have left for the Cincinnati Bengals as the No. 1 pick of the draft, but Brennan is in place to take over for a superstar who threw for 60 touchdowns. He’s got a strong arm, but the junior played in just a single game two seasons ago and threw only 40 passes last year. If he falters, true freshmen TJ Finley and Max Johnson will make their bids.

Altered schedule: If Chase isn’t the best player on the team, it might be cornerback Derek Stingley Jr., who became an All-American as a freshman. Pro Football Focus ranked him the second-best returning corner, behind Virginia Tech’s Caleb Farley, after Stingley paced the Tigers’ defense with six interceptions, 15 pass breakups and 38 tackles. He also returned 17 punts for an average of 9.6 yards and is such a good athlete that Orgeron hinted in a May radio interview that Stingley would be used as a blitzer and maybe even on offense. Some liken him to Charles Woodson.

Where LSU ranked nationally in various statistical categories last season — and how the Tigers ranked in 2018.

This Power Five school won its last four games of the 2019 season, but none of them were in its conference championship game.

Our 12th annual preseason Top 25: No. 7 Florida looks ready to make its move — if the defense is there