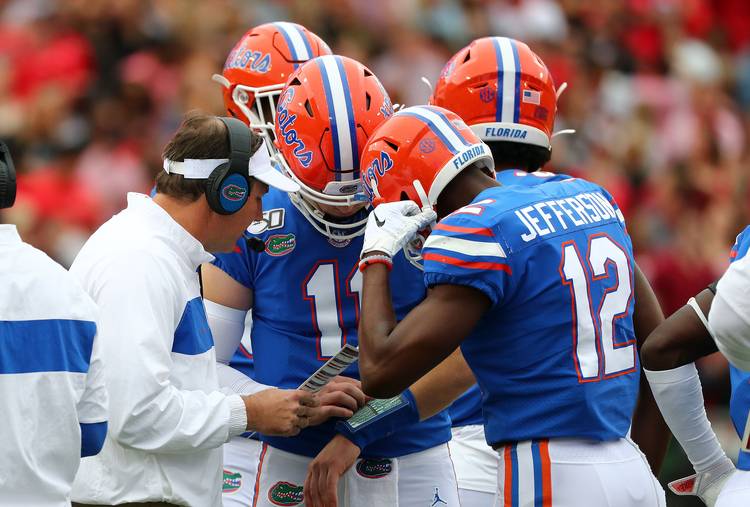 Dan Mullen has the program humming. Florida is coming off its first 11-win season since 2012 and Mullen has produced 10 wins in each of his first two seasons, which hadn’t happened since Urban Meyer did it back in 2008 and 2009. Quarterback Kyle Trask is a fifth-year senior and he’s got an experienced offensive line. Causes of concern? The defense has lost a lot of key parts to what has been one of the nation’s top units the last two years, and Trask lost his top to pass-catchers from last year. The best five defensive players from last season are now in the NFL. It’ll be up to players like new rush end Brenton Cox — a former five-star recruit who transferred from Georgia — and sophomore cornerback Kaiir Elam, who was the Gators’ most consistent corner in the second half of the season, to lead the way. The SEC East should come down to Georgia or Florida; the two most important games come in a three-game stretch in October, and both are home games — LSU on Oct. 10 and then Georgia on Oct. 31 in Jacksonville.

Florida was ranked 10th in our preseason poll last year.

COVID-19 has had a big impact at Florida; nearly 240 student-athletes have been tested since they returned to campus last month, with 29 positive tests. That includes some football players. And athletic director Scott Stricklin revealed last week that he tested positive, too. … Seven Gators went in the NFL draft. Shawn Davis, who started nine games last year at safety, decided to come back rather than jump to the NFL. Former Gators quarterback Feleipe Franks is now at Arkansas, as a graduate transfer. … Former five-star running back Lorenzo Lingard, who transferred from Miami, was ruled eligible to play this season. He’s a top candidate to replace La’Mical Perine, the MVP of the Orange Bowl who was drafted by the New York Jets. … Florida and North Carolina State agreed to a home-and-home series for 2026 and 2032. … Florida’s 2021 recruiting class is ranked 10th in the country; Mullen has had back-to-back top-10 classes. The 2021 group was bolstered this summer when Jalen Kitna, the son of former Detroit Lions quarterback Jon Kitna, flipped his commitment to Florida from Boston College.

Chomping down on Gator Bait: The traditional “Gator Bait” cheer at Florida sporting events — fans chomp twice with their arms, followed by the Gator Bait cheer — has been discontinued; the school cited racist imagery associated with the phrase as the main reason. It’s still not clear, though, if fans will still be allowed to do the chomp, which has been around since the early 1980s. Florida President Kent Fuchs also said the university would take steps “removing any monuments or namings that UF can control that celebrate the Confederacy or its leaders.”

Staying on Trask: Trask isn’t generating a lot of preseason buzz, but he could be primed for a solid season. Tight end Kyle Pitts should be a go-to target for him, the offensive line returns everyone except center Nick Buchanan, and he’ll have a chance to impress early with games against LSU, Tennessee and Kentucky. Trask, a Texan, spent the shutdown back home in Manvel where he worked out six days a week — including Tuesdays and Thursdays at a Houston quarterback academy where he reconnected with former Manvel quarterback D’Eriq King, who’s the new quarterback at Miami.

Mr. Reliable: If it’s a tight game, the Gators can be glad they have Evan McPherson, who may finish his career as the best kicker in UF history. He is 34 of 38 on field goals in his two years (and one of those, a 2018 kick against Kentucky, remains a source of controversy for Gators fans) and carries an eight-kick streak heading into this season. So he’s nine straight field goals away from Bobby Raymond’s school record of 17 straight.

Where Florida ranked nationally in various statistical categories last season — and how the Gators ranked in 2018.

This Power Five school has played in three straight conference championship games. And two of its last three losses have come to coaches who once served on Mack Brown’s staffs at Texas.

The Dotted Line: Predicting the destinations of the top uncommitted prospects on the Fab 55