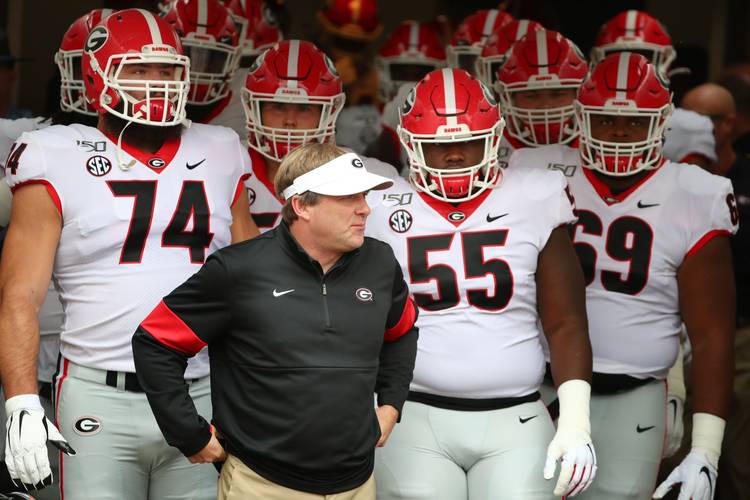 Georgia head coach Kirby Smart has been on an impressive run on and off the field, making three straight SEC championship games and signing the country's No. 1 recruiting class in two of the last three years. (Kim Klement/USA Today)

The Bulldogs have come close to contending for a CFP title, falling to Alabama in overtime in the 2017 championship game and having played in three straight SEC title games. So yes, even with all the departures (seven drafted players, including two offensive linemen in the first round alone) and working in a new quarterback, running back, offensive line and offensive coordinator, Georgia should be right there again late in the season. That’s what recruiting top classes will do for your program; the Bulldogs’ last five classes have ranked Nos. 6, 3, 1, 2 and 1 nationally, with 22 five-star prospects signed. The buzz is at quarterback, where five-star USC transfer JT Daniels will battle with Wake Forest graduate transfer Jamie Newman. Zamir White should take over the running game with D’Andre Swift gone; he missed the 2018 season with an injury but ended up last season’s Sugar Bowl MVP. Georgia, which was one of the nation’s top defenses last year, needs another strong season from that unit.

Georgia was ranked third in our preseason poll last year.

Smart plucked Todd Monken away from the Cleveland Browns in January to be the offensive coordinator; Georgia will pay him at least $3.75 million (he has incentives, too) through June 2023. The hire was quickly praised by NFL quarterbacks Jimmy Garoppolo and Ryan Fitzpatrick. Monken, a former head coach at Southern Miss, also worked wonders as Mike Gundy’s OC about 10 years ago. … Georgia’s biggest offseason storyline, besides the pandemic and social unrest, was Daniels’ transfer from USC. He was granted an NCAA waiver, which makes him immediately eligible. … Seven Bulldogs went in the draft, one short of Georgia’s all-time best (eight, in 2002 and 2013) and tied with Florida for the third-most in the SEC behind LSU’s 14 and Alabama’s nine. Eight more Bulldogs signed NFL contracts as undrafted free agents. … In other transfer news, highly-regarded offensive lineman Cade Mays transferred to Tennessee; he started 18 career games in his two years with Georgia. He was an SEC all-freshman team pick and a Freshman All-American in 2018 and last year started 11 games in various spots on the line. And redshirt sophomore cornerback Divaad Wilson, who started twice last year as a freshman, has entered the transfer portal too. … Did you hear the one about the program’s annual charity golf event that was almost called off because Bulldogs football players couldn’t participate due to COVID-19 precautions? The Bulldogs Battling Breast Cancer Tournament, which has raised more than $1 million over the past 15 years, was saved when several former Georgia players stepped up to fill the 35 player spots that were needed in the field. … In an interesting recruiting tale, Columbia, S.C. quarterback Jackson Muschamp will head to Georgia as a walk-on. He’s the son of South Carolina head coach Will Muschamp, who was Smart’s former teammate in college and roommate when they both coached at Valdosta State early in their careers. Jackson Muschamp threw for more than 5,300 yards and 64 touchdowns in his final two years of high school. And Galena Park North Shore’s Zachary Evans, who was the nation’s No. 2 running back prospect, is enrolled at TCU. He signed with Georgia back in December, but didn’t publicly announce his signing as expected and was later released from his national letter-of-intent by the Bulldogs.

QB quandary: It wouldn’t be Georgia football without drama at quarterback. For the fourth time in Smart’s five years, there are questions at the position. Justin Fields is now at Ohio State, Jake Fromm is a rookie with the Bills and the Bulldogs are starting over. Jake Newman, the Wake Forest grad transfer, is immediately eligible after throwing for 2,868 yards, 26 touchdowns and 11 interceptions last season. But JT Daniels has been ruled eligible, too. He has three years left of eligibility. Daniels threw for 2,672 yards, 14 touchdowns and 10 interceptions as USC’s freshman starter in 2018, but he was lost for the season with a knee injury in the Trojans’ 2019 season opener. Smart has said the starting job will be won in August. There are other QBs to consider, too: Fromm’s backup last year, Stetson Bennett, is still around. There’s a redshirt freshman and a true freshman, and five-star Brock Vandagriff has committed for the 2021 class.

Rebuilding the line: How good was the offensive line last year? The Bulldogs had two tackles go in the first round of the NFL draft — and they were underclassmen. Georgia became the first school since 1991 to produce two first-round offensive tackles. The Bulldogs lost their offensive line coach, too. Sam Pittman is now Arkansas’ head coach. Matt Luke, who was fired by Ole Miss in December after NCAA violation issues, is now in charge of Georgia’s line. Trey Hill is back at center, and Jamaree Salyer — who played in 13 games with two starts at right tackle, including the bowl game — will man one of the two tackle spots. The two guard spots will be settled by three candidates. Ben Cleveland, a senior, has played in 36 career games; Justin Shaffer, another senior, has played in 26 games with two starts, though he missed the last eight games of 2019 with a neck injury. And Warren Ericson, a redshirt sophomore, started at right guard in the Sugar Bowl.

A big shoe to fill: It won’t be easy replacing departed kicker Rodrigo Blankenship, a fan favorite who was nicknamed “Hot Rod” and is now with the Indianapolis Colts. Blankenship won the Lou Groza Award as the country’s best kicker and was good on 27 of his 33 field goal attempts last season (and was 80 of 97 for his career). He is Georgia’s all-time leading scorer. The new kicker is a Texan. Jared Zirkel, a freshman from Kerrville Tivy whose mother is a UGA graduate, certainly has the leg to be a successful college kicker: He hit a 59-yard field goal as a high school junior and was the No. 5-rated kicker in the 2020 recruiting class. He also had a 48-yarder and a pair of 45-yarders his junior year. He won Georgia’s annual summer camp kicking contest in 2019. He committed a few weeks later.

Where Georgia ranked nationally in various statistical categories last season — and how the Bulldogs ranked in 2018.

This is the only program in the country that has had four different head coaches with 100 or more coaching victories each.

The Dotted Line: Predicting the destinations of the top uncommitted prospects on the Fab 55