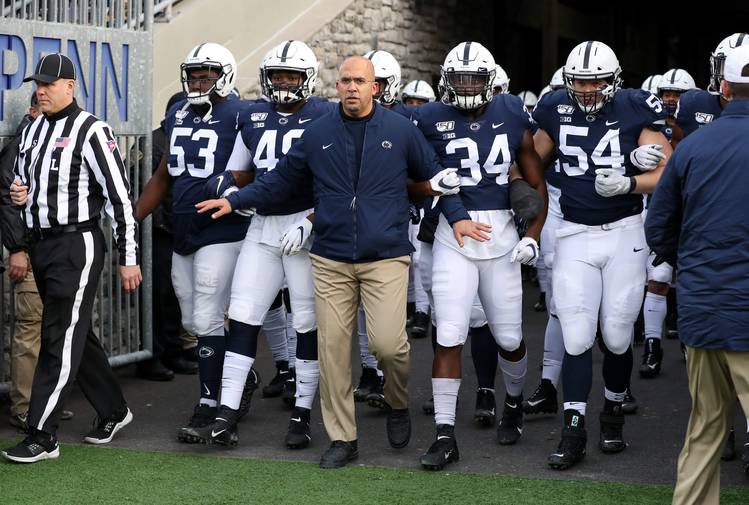 Penn State head coach James Franklin leads his team out of the tunnel prior to taking the field against Rutgers at Beaver Stadium last year. (Matthew O'Haren/USA Today)

The Nittany Lions have hopes for both a Big Ten title and a College Football Playoff berth. The Big Ten has moved to a conference-only schedule, so winning it likely means access to one of those Final Four spots. The route goes through Ohio State — again. Quarterback Sean Clifford, who averaged 254.7 yards of offense last year, is back and he’s surrounded by a capable group of running backs led by Journey Brown, who had 100-yard games in the final five games. He rushed for 202 yards in the Cotton Bowl win over Memphis. The offensive line is in great shape. Jahan Dotson, who has 40 catches over the past two years, leads an otherwise inexperienced group of receivers. But the defense is loaded and experienced, led by All-American linebacker Micah Parsons, and returning starters on the defensive line and secondary.

About the Nittany Lions

There was turnover on Franklin’s coaching staff over the offseason, though most of them chose to leave for higher paying jobs with more responsibility, not because of a downward trajectory with the program. Kirk Ciarrocca, formerly of Big Ten rival Minnesota, takes over at offensive coordinator; Penn State averaged 35.8 points per game last year. There are new coaches for the wide receivers, offensive linemen and defensive linemen, too. Penn State’s 2020 recruiting class ranked 14th nationally and third in the Big Ten. The Nittany Lions need immediate help at wide receiver and tight end; Franklin did land four-star Theo Johnson, the third-ranked tight end in the 2020 class, and four-star receiver Parker Washington also could push his way into early playing time. The conference-only schedule means Penn State won’s play Kent State, Virginia Tech or San Jose State to start the season. The season opener is Sept. 26 at home against Northwestern and Penn State hosts Ohio State on Oct. 24.

Scoreboard watching: Penn State’s offensive numbers from 2019 are misleading. Sure, the Nittany Lions averaged 35.8 points per game, but the squad failed to score 30 or more points in seven of the final 11 games of the year. Take away three games where Penn State scored more than 50 points (Idaho, Maryland and Memphs) and it’s clear that the offense must become more potent in important games against Big Ten competition.

Concerns at receiver: No team ranked this highly has a singular hole on the roster as big as Penn State does at wide receiver. Tight end Pat Freiermuth is among the nation’s best, but the team’s second leading returner in receptions at wide receiver is junior Daniel George, and he caught nine passes last season. Former blue-chip recruit Justin Shorter transferred to Florida and KJ Hamler now plays for the Denver Broncos. Penn State can’t challenge Ohio State for a conference championship without playmakers at receiver.

Cain looks able: Do Texas fans remember Noah Cain? He was a four-star running back from IMG Academy in the 2019 class who chose Penn State over Texas and numerous other programs. Cain was named to the Doak Walker Award watch list after a solid freshman season. Penn State and Iowa are the only Big Ten schools with two running backs on the list.

Where Penn State ranked nationally in various statistical categories last season — and how the Nittany Lions ranked in 2018.

This school has played in more bowl games than any other college football program.

The Dotted Line: Texas, Oklahoma rise to top of the Big 12 recruiting rankings

Sen. Graham on NCAA compensation rules: ‘We’ve got to do something’