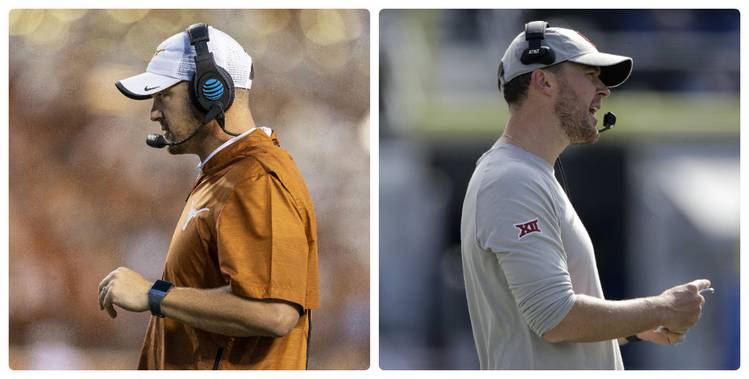 The 2021 Big 12 recruiting rankings are beginning to take a familiar shape as Oklahoma begins pushing its way towards the top spot. Texas and Oklahoma dominate the Big 12 recruiting landscape on a yearly basis with the Longhorns taking the crown the last two years despite the Sooners’ on-field domination, though gradutate transfers like Kyler Murray, Baker Mayfield and Jalen Hurts don’t count toward the rankings.

Oklahoma jumped Baylor into the second spot since our June rankings update:

Texas’ lone commitment since our last update was four-star cornerback Jamier Johnson from Pasadena, Calif. over the past month. Johnson, the 17th-ranked cornerback in the nation, is considered a national top 250 prospect. The Longhorns gained a commitment from four-star cornerback Ishmael Ibraheem, forming a formidable duo at the position. Texas also holds pledges from four-star safety JD Coffey and elite athlete Billy Bowman Jr., who is expected to play primarily in the defensive backfield.

Eight of Texas’ 10 in-state commitments rank among the top 55 players in Texas. The Longhorns possess the best class in the Big 12. Texas now holds a commitment at every position except for kicker, though the Longhorns did add a punter from Australia in Isaac Pearson.

The Sooners’ class ranks 13th in the nation, one spot behind Texas’ after adding four pledges over the past 30 days, including Caleb Williams, a five-star and the top-ranked dual-threat quarterback in the nation. Oklahoma also added McCutchin, a four-star cornerback from Austin LBJ.

Oklahoma is the safest bet to sign the best class in the conference with the Sooners leading on multiple prospects remaining on the Fab 55 like guard Bryce Foster, running back Camar Wheaton and defensive tackle Marcus Burris.

Baylor coach Dave Aranda is using the momentum that former head coach Matt Rhule added to the Bears’ program with a terrific 2019 season that ended in a Big 12 title game appearance. Baylor should recruit better than everyone in the conference besides Texas or Oklahoma. Aranda is proving capable on the recruiting trail with a trio of Fab 55 commits, including Drones, an Elite 11 quarterback.

West Virginia made a huge leap up the rankings from mid-May and are back toward the top of the Big 12 rankings. The Mountaineers are never going to compete in recruiting with the likes of Oklahoma and Texas, but head coach Neal Brown is doing an excellent job within the state of West Virginia and by attacking the state of Ohio. We all know about the talent produced by Texas, California and Florida, but Ohio is a real hotbed of talent, too. Brown wants West Virginia to be a destination for those players in Ohio that may not get a real look from Ohio State.

Commitments from twin wide receivers Bryson and Blaine Green of Allen helped Oklahoma State move up the rankings in June. The Cowboys have only added one pledge over the past 30 days and continue to hang around the middle of the Big 12 recruiting rankings.

The Cyclones dipped into Austin to gain a commitment from Charles Wright, a 6-1, 194-pound three-star quarterback from Austin High. He threw for more than 2,500 yards as a junior and a sophomore. He’s passed for 57 touchdowns in three years of varsity action. Bonifas, a three-star offensive tackle, is one of the top players from Iowa. Army pledged in early April and the three-star is Iowa State’s top-rated commitment.

Kansas State has added three new pledges since our mid-June update. Four-star quarterback Jake Rubley from Colorado continues to headline the class. The 6-3, 205-pounder threw for nearly 2,000 yards in his past two seasons as a starter. Kansas State’s class currently ranks 70th in the country. The 2020 class finished 51st.

There haven’t been any commitments for Texas Tech since we published our last ranking update. Morton is a big get, though. The four-star from Eastland High in West Texas was the District 3-3A Division I offensive MVP as a sophomore and junior. The 6-2, 185-pound athlete is the eighth-ranked dual-threat quarterback in the country and a national top-250 prospect in the nation. He’s accounted for 47 touchdowns over the past two years. The Red Raiders hope Banks can become a star along the defensive line.

The Horned Frogs added a pair of commitments since mid-June, but the biggest additions to the roster came unconventionally with five-star running back Zach Evans choosing TCU after national signing day in 2020 and the transfer of LSU defensive back Marcel Brooks, a member of the 2019 Fab 55.