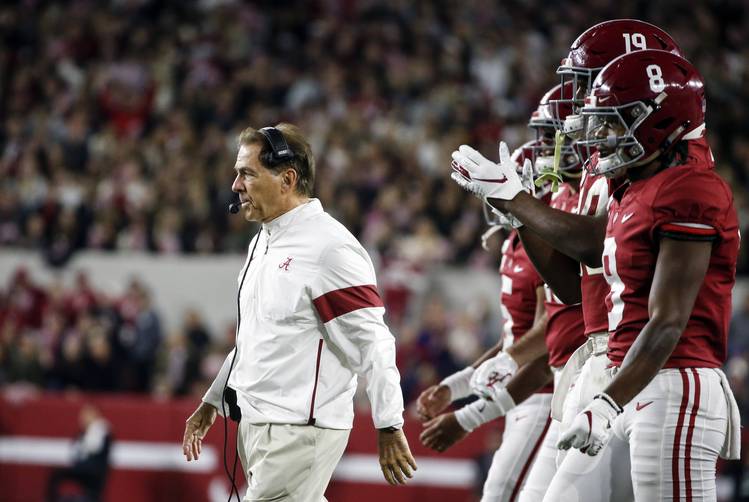 Alabama head coach Nick Saban walks out to the huddle during a timeout in last year's 46-41 loss to LSU. (Butch Dill/USA Today)

Alabama’s first two-loss season since 2010 (losses to Auburn and LSU) led to the Crimson Tide finishing outside the CFP field for the first time.  They finished No. 8 in the final standings. Quarterback Mac Jones got some needed experience when Tua Tagovailoa was lost midseason; he completed nearly 69% of his passes and threw 14 touchdowns and three interceptions, two of which were returned for touchdowns in the loss to Auburn. He probably gets the edge over Bryce Young, a five-star recruit from California who Bama flipped from USC. Last year’s defense, which ranked 20th nationally, lost stalwarts Xavier McKinney and Raekwon Davis but does get back linebacker Dylan Moses, who missed 2019 with a knee injury, and cornerback Patrick Surtain II, the son of a former NFL Pro Bowler. The anticipated season opener with USC has been called off; this year the Tide gets Georgia, Texas A&M and Auburn at home but they travel to LSU, Tennessee and Ole Miss.

Alabama was ranked second in our preseason poll last year.

About the Crimson Tide

After going 21-16 in three years at South Florida and 16-21 in three years at Texas before that, Charlie Strong joined the program in February as a defensive analyst. He’s the sixth former head coach to join Saban’s staff. And new defensive line coach Freddie Roach — who starred as an Alabama linebacker in the early 2000s — rejoined the Alabama staff, coming from Ole Miss. He replaces Brian Baker, who’s now an assistant coach with the Indianapolis Colts. Roach was Saban’s director of player development at Alabama from 2015-17. … Nine Alabama players went in the draft, all in the first three rounds. That included four first-rounders all within the first 15 overall picks. … After the Pac-12 went to a conference-only schedule, the Alabama-USC season opener was called off; the Tide’s new opener will be Sept. 12 at home against Georgia State.

Championship pedigree: Want an illustration of a winning tradition and championship expectations? After the 48-45 Iron Bowl loss to Auburn, Bama fans flooded the airwaves demanding big changes to the coaching staff. All the while, that same staff was landing the nation’s second best recruiting class. For folks in Austin, it must be sobering to see the Tide faithful up in arms in the midst of an 11-win season while Texas has gone 10 years since topping 10 wins.

Growing pains: Pete Golding’s first season as defensive coordinator did not live up to Alabama standards, but his unit took a huge hit when he was forced to play inexperienced freshman Christian Harris and Shane Lee at linebacker after starters Dylan Moses and Josh McMillon suffered season-ending knee injuries in preseason. The good news is those two are back as sophomores alongside a healthy McMillon, who was granted a sixth year of eligibility.

Mayoral unrest: Saban and his team made headlines in late June after making a video that included the statement, “All lives can’t matter until Black lives matter.” It turns out that Mark Chambers — the mayor of Carbon Hill, Ala., located one hour north of Tuscaloosa — was quoted in al.com as saying, “When you put black lives before all lives they can kiss my a—,” referring to Saban and his team. Chambers subsequently resigned.

Where Alabama ranked nationally in various statistical categories last season — and how the Crimson Tide ranked in 2018.

Even in a pandemic, Texas coach Tom Herman would ‘love to play’ Texas A&M