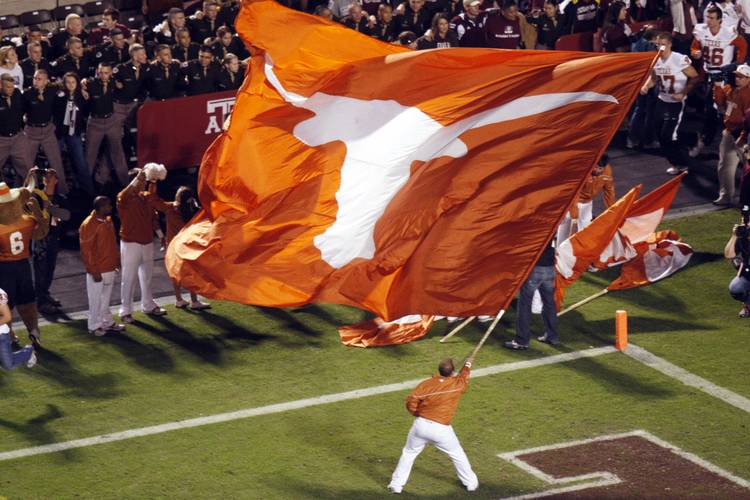 The Longhorns flag waves as the team runs onto the field during the first half of the Texas A&M Aggies vs University of Texas Longhorns rivalry NCAA football game at Kyle Field on Thanksgiving Day, Thursday, November 24, 2011 in College Station, Texas. (Patrick T. Fallon/The Dallas Morning News)

Texas coach Tom Herman has always been polite but firm when asked about restarting the rivalry with Texas A&M. Simply put, the Longhorns want to play.

It’s still unclear whether the global pandemic will derail the entire college football season. But Herman made his strongest plea yet Thursday why the Longhorns should face the Aggies, especially at a time when it may be difficult to have a full 12- or even 10-game season.

“We’d love to play ’em, I know that,” Herman said on a Zoom call with the Houston Touchdown Club. “I know that at least I know within our program we would love to play Texas A&M, certainly.”

It’s well known how the rivalry ended when A&M went to the SEC prior to the 2012 season. The two schools stopped playing each other in all sports for a while. Time thawed hard feelings on both sides, and now most sports routinely play each other — except football.

“It’s no secret,” Herman said. “You know, it’s mind-boggling to me — mind-boggling to me! —that Georgia-Georgia Tech figure out a way to play every year. Clemson-South Carolina, Iowa-Iowa State, Kentucky-Louisville. I mean, the list goes on and on and on of rivals, in-state rivals that happen to be in different conferences… Florida-Florida State. I mean, where do you want me to stop. They play every year.

“And I get it, we want a marquee game in non-conference because we don’t play a rival, a traditional rival at home,” Herman continued. “Our biggest rival in conference right now is Oklahoma; we play them at a neutral site in Dallas every year. So if I’m an athletic director, I’m going to want a marquee non-conference game at home every other year. Totally understandable.

“But to fly to Los Angeles to play a night game on a Saturday night on West Coast time to say that we played USC, or to fly to Columbus, Ohio, or to fly to Gainesville, Florida, when we can hop in a bus and drive an hour and a half east, I’ll never understand it,” the UT coach added.

“I hope someday that we can figure out a way to be like everybody else in the country, the Clemsons and South Carolinas, the Georgias and Georgia Techs and all of the examples that I gave you.”

Herman pointed out that Texas athletic director Chris Del Conte called his A&M counterpart Scott Woodard in 2018 to start the discussions. Woodard, who has sent left A&M for LSU, said the Aggies’ schedule was full.

“They had scheduled Miami,” Del Conte told the American-Statesman in January 2019. “Things like this just depend on when someone has the right opening at the right time.”

Del Conte has since added home-and-home series against Alabama, Ohio State and Florida. Still, Herman wants to see the maroon and white in Royal-Memorial Stadium, and the burnt orange at Kyle Field.

For his part, A&M coach Jimbo Fisher has been a firm no since his arrival in Aggieland.

But if the Aggies are forced to scramble for opponent this season, the Horns would accept that phone call.

“You know, we’ll see,” Herman said. “I know Chris Del Conte feels the same way that I do. And we’ve reached out to try to play them in the past. Didn’t go real well. And, you know, maybe this will be the catalyst to make it happen. I haven’t heard anything like that. But who knows? Desperate times calls for desperate measures, right?”