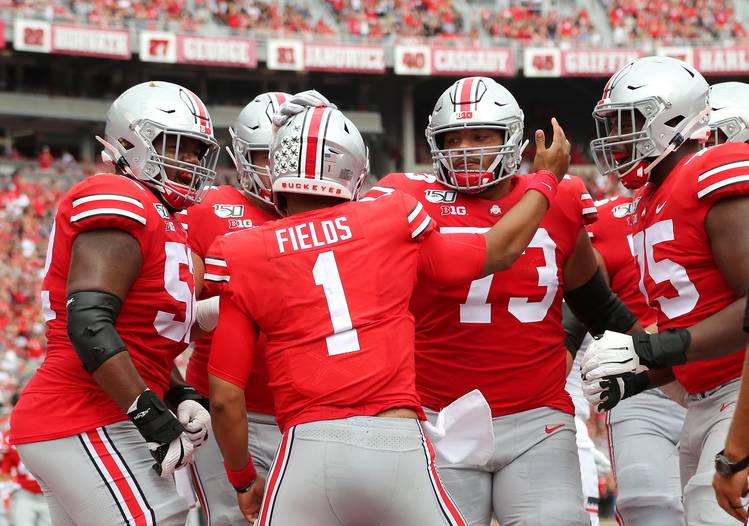 Ohio State quarterback Justin Fields finished third in last year's Heisman Trophy balloting and would have made the Buckeyes a strong candidate to be preseason No. 1 until the Big Ten canceled fall football. (Joe Maiorana/USA Today)

The Buckeyes aren’t used to losing. Since 2011, Ohio State has gone 99-10 and won one national title. But the Buckeyes did suffer some notable losses this offseason. The team’s two best defensive players left school early to become the No. 2 and No. 3 picks in the NFL draft, and the running back who rushed for 2,000 yards is now a Baltimore Raven. Last year’s passing game coordinator, Mike Yurcich, is now the offensive coordinator at Texas. The former co-defensive coordinator, Jeff Hafley, is running Boston College’s program. And the Big Ten has canceled all non-conference games, so forget about the signature showdown at Oregon. But Ohio State has one of the nation’s top quarterbacks, and Justin Fields and his teammates will still have a chance to prove themselves in marquee matchups against Iowa, Penn State and Michigan.

Ex-Oklahoma running back Trey Sermon joined Ohio State’s backfield as a graduate transfer in April. He rushed for 2,076 yards in his three years with the Sooners. … Ohio State hired Kerry Coombs, a former Buckeyes coach who spent the past two years in the NFL, to replace Hafley. After working the last couple of seasons as a senior quality control coach, Corey Dennis will coach the quarterbacks.  …. Ohio State’s 2020 recruiting class was ranked as the nation’s fifth-best. … Ten Buckeyes were selected in the NFL draft.

Help wanted: How good was Ohio State’s defense in 2019? It boasted top-ten numbers in most of the statistics of significance. Six teams scored their season low against the Buckeyes. The team sent a defensive end who missed two games to the Heisman Trophy ceremony. Opposing offenses weren’t the only ones that took note of what Ohio State was doing. Six NFL teams used seven picks on Ohio State defenders. Wade is a potential first-round pick, but can a former five-star signee like Zach Harrison, Taron Vincent or Tyreke Johnson break out on a depleted defense?

Talented targets: After leading Ohio State with 57 receptions, K.J. Hill became a seventh-round pick of the Los Angeles Chargers. Don’t worry about the passing game, though. Fields, who finished third in the voting for the Heisman, is back. Additionally, the receiving room is still stocked. No Buckeyes receiver had more yards or touchdowns last year than Olave. Wilson also had a solid debut in his first year out of Lake Travis. Oh, and Ohio State signed two of the five five-star receivers in the 2020 class (Julian Fleming and Jaxon Smith-Njigba).

Homefield advantage: Ohio State has won its last eight meetings with Michigan, and the last two have been decided by 62-39 and 56-27 scores. Michigan is one of five teams that remains on Ohio State’s home schedule for the season. The Wolverines, though, are the only one of those that have beaten Ohio State at home this millennium (Michigan recorded a 38-26 win on the road in 2000). Nebraska and Rutgers have never won in Columbus. Indiana and Iowa’s last wins at Ohio State respectively came in 1987 and 1991.

Where Ohio State ranked nationally in various statistical categories last season — and how the Buckeyes ranked in 2018.

No. 3: A closer look at Alabama’s future non-conference contracts / Inside the Crimson Tide

Our 12th annual preseason Top 25: No. 1 Clemson just keeps on keeping on