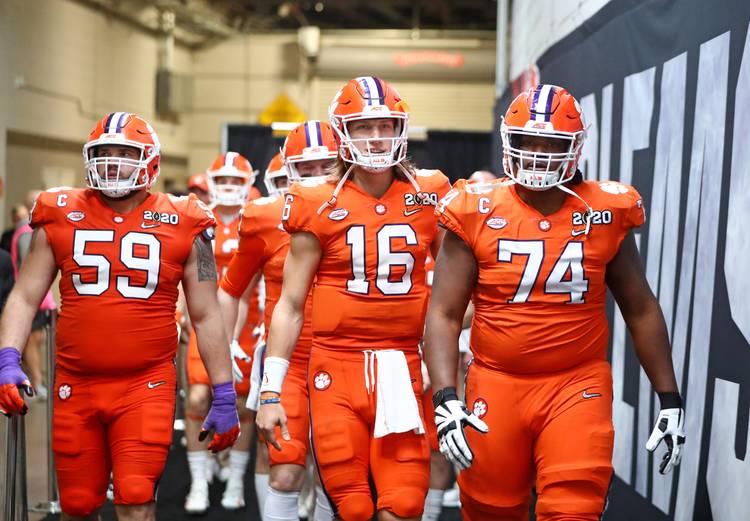 Clemson quarterback Trevor Lawrence, center, is 25-1 as the Tigers' starter. That one loss, though, was a big one: Last season's CFP championship game loss, to LSU. (Mark J. Rebilas/USA Today)

The college football season is less than two months away. Right? As it approaches with question marks, our 12th annual countdown series of our preseason Top 25, as selected by the American-Statesman sports staff, concludes with who we think are the top teams in the country.

No other program has been more synonymous with success in recent years, save for Alabama. Clemson has won 14 or more games in four of the last five years, and last year won 10 games by 31 points or more. The Tigers have dominated the under-achieving ACC, where once dynastic brands like Florida State and Miami are coming off losing seasons. Quarterback Trevor Lawrence, the face of college football, figures to take the Tigers into the CFP for a sixth straight year and then become the first pick of next spring’s NFL draft. The offensive line must be rebuilt, as only one starter returns, and two of the three linebackers left, including Butkus Award winner Isaiah Simmons. When you pair Lawrence with running back Travis Etienne, who’s the ACC’s all-time scoring running back, Clemson has the nation’s best backfield tandem.

Clemson was ranked first in our preseason poll last year, too.

Wide receiver Justyn Ross, who led the team last year with 66 catches for 865 yards and 8 touchdowns, was diagnosed with a congenital fusion in his spine and will miss the season. … Clemson has had 23 players test positive for the coronavirus. The Tigers did get in nine spring workouts before they were called off. Swinney also took some heat when he was seen wearing a shirt with the words “Football Matters,” drawing the ire of some who believed he was mocking the Black Lives Matter movement. He denied that. But he also had to defend his program when it was revealed that one of his assistants had repeated a racial slur to a player in 2017. … Quarterback Trevor Lawrence became engaged this summer to his longtime girlfriend and soccer player, Marissa Mowry. He popped the question at Memorial Stadium. … Clemson signed 23 players in its third-ranked recruiting class, including perhaps the marquee defensive line crop in the country, none bigger than five-star tackle Bryan Bresee and five-star end Myles Murphy. The Tigers signed six five-stars in all. Bresee was considered by many to be the nation’s top overall recruit. … Clemson parted with master recruiter and wide receivers coach Jeff Scott, who’s now the head coach at South Florida.

Missing targets: Lawrence, the presumptive first pick of the 2021 draft, is out to improve on a 25-1 career record and is probably still peeved about his play against LSU in the title game. He’ll be without the departed Tee Higgins as well as Ross  and may not have a go-to receiver. But Lawrence can throw to 6-3 sophomores Joseph Ngata and Frank Ladson as well as top recruit E.J. Williams from Ross’ high school and tight end Braden Galloway coming off a one-year suspension.

Et tu, Etienne?: Unlike a lot of draft-eligible running backs like J.K. Dobbins and De’Andre Swift, the athletic Etienne surprised some when the talented, tough running back spurned the NFL and announced he was returning for his senior year. A chance to become the first three-time ACC player of the year and earn a second ring proved to big a carrot to turn down and maybe work on his receiving game. He needs just 565 yards to become the league’s all-time leading rusher, and after averaging 7.8 yards a carry last year, who’s going to bet against him?

Defensive boss: Brent Venables’ name pops up for head coaching vacancies like bluebonnets in Texas, but the former Oklahoma defensive coordinator says he’s plenty happy to remain at Clemson for his ninth season. Little wonder. With Dave Aranda leaving LSU for the top job at Baylor, Venables may arguably be the best defensive wizard in all of college football. In his last six seasons, the Tigers finished sixth last year in total defense and before that fifth, fourth, eighth, 10th and first nationally. Of course, he takes home $2.4 million a year, so why leave? “Everyone says all good things must come to an end,” he told David Hood of TigerNet.com. “I don’t think so.”

Where Clemson ranked nationally in various statistical categories last season — and how the Tigers ranked in 2018.

No. 3: A closer look at Alabama’s future non-conference contracts / Inside the Crimson Tide

No. 2: Ohio State’s athletic program has a lot riding on football / Inside the Buckeyes

Our 12th annual preseason Top 25: No. 2 Ohio State has shoes to fill, but shouldn’t be worried

The Dotted Line: Texas hopes to add a handful of 2021 prospects