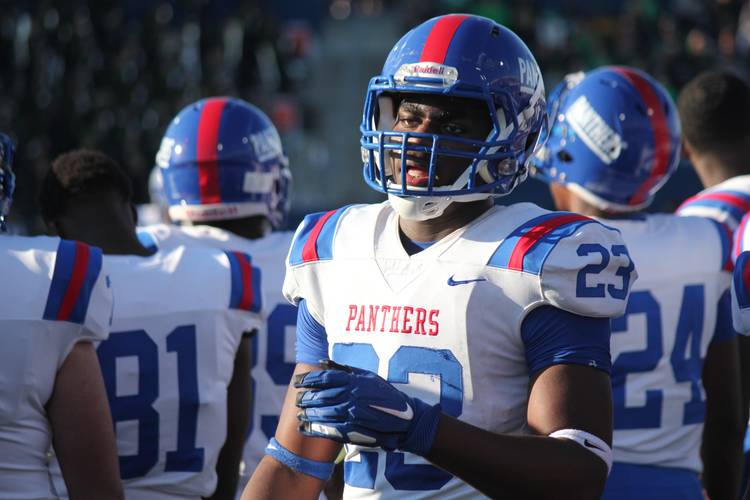 Texas’ 2021 recruiting class grew to 15 members on Monday when three-star tight end Gunnar Helm joined a group that ranks 12th in the nation and first in the Big 12. The Longhorns have yet to start building their 2022 class. Tom Herman and his staff held four 2021 commitments by July of last year, so it wouldn’t be a surprise if the Longhorns began getting commitments for 2022 while still working to finish the current class.

Who are Texas’ top defensive targets in the 2022 class? Here are five highly-ranked prospects the Longhorns hope to get on campus:

Texas needs to reload at defensive tackle in 2022 with a nose guard prospect capable of eventually replacing Keondre Coburn, who signed in 2018, and Moro Ojomo, who signed in 2019. The Longhorns like T’Vondre Sweat, but a move to a four-man front means the defense needs more numbers on the interior.

Alexander is considered the best interior defensive tackle in the state for the next cycle. The big man is planning on playing at Denton Ryan as a junior after playing his first two seasons at Dallas Skyline. The move can’t hurt Texas’ chances considering the Longhorns hold two commitments from Ryan products in the 2021 class.

The Longhorns want to build pipelines into power programs in the Dallas-Fort Worth area, similar to what Texas has in the Houston area. Denton Ryan, as mentioned above, is one of those schools. Duncanville is also among those programs. Texas signed quarterback Ja’Quinden Jackson in 2020 and is in the mix for 2021 offensive tackle Savion Byrd. Duncanville is never short on talent.

Abor is a physical freak. He already looks like a college athlete with his size and ability to move. Starting at Duncanville is no easy feat, especially for a sophomore. Abor helped Duncanville reach the Class 6A Division I state championship game for a second straight season. He was named the District 8-6A defensive newcomer of the year.

Perkins is one of three in-state linebackers with a UT offer. He’s a long, rangy outside linebacker with the ability to rush the passer and force the edge against the run. Perkins makes his impact by playing downhill for Cy Park, creating havoc in the backfield whether a team is rushing or passing. He recorded 46 tackles as a sophomore, including nine tackles for loss and four sacks. His five pass breakups prove he’s capable of playing in space.

Texas wouldn’t mind double-dipping at Denton Ryan for a second straight cycle. The ideal 2022 class for Texas includes Alexander and Jordan. Ryan teammates Billy Bowman Jr. and Ja’Tavion Sanders are currently pledged to Texas in the 2021 cycle. Jordan is a big, athletic cornerback who holds offers from programs sprinkled across the country. The four-star helped Ryan reach the Class 5A Division I state championship game while earning District 4-5A Division I defensive newcomer of the year honors.

Safety might be the best recruited position of the Herman era. The defensive staff hopes Biddle can continue the tradition of high ranking safety prospects to sign with Texas. The Longhorns will need to beat out the likes of Texas A&M and Oklahoma to land Biddle, a cover safety with plenty of physicality to help in run support. He recorded 43 tackles and two pass breakups as sophomore.

Hartzell: Texas now looking at 25% capacity at Royal-Memorial Stadium for 2020