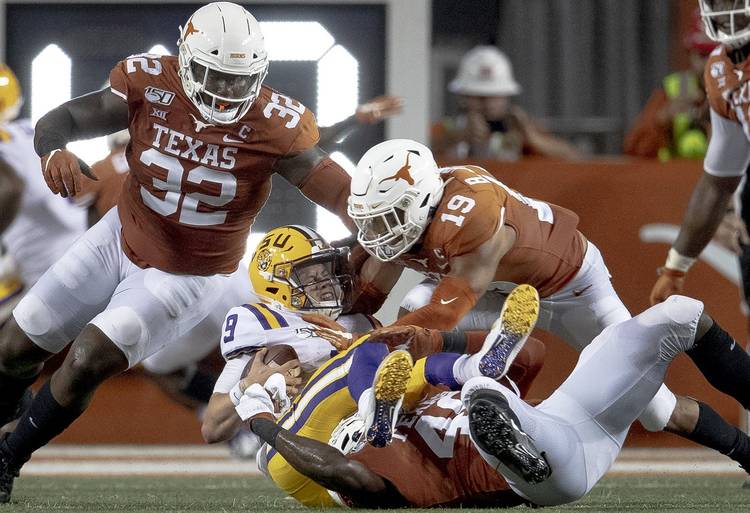 The Longhorns won’t be calling Baton Rouge any time soon.

The much-anticipated Texas-LSU rematch on Sept. 12 is off as the SEC announced Thursday its teams will play a 10-game, conference-only schedule this fall because of the COVID-19 pandemic.

A Texas spokesman said the school would withhold comment until the Big 12 gives guidance on how the league will handle its scheduling. Now, it’s likely the Big 12 will announce a similar 10-game format that would consist of nine conference opponents and one non-conference foe.

If the Big 12 does choose a 10-game format, it’s unclear whether Texas would play South Florida, originally scheduled for Sept. 5, or UTEP, which was set for Sept. 19.

The SEC announced its shortened season will begin Sept. 26, and the league title game will be pushed back to Dec. 19.

In a statement, SEC commissioner Greg Sankey said that after consultation with medical advisers, “we have determined that this is the best course of action to prepare for a safe and healthy return to competition for SEC student-athletes, coaches and others associated with our sports programs.”

Will the season even begin at all? Frankly, who knows? The Big 12 even called off its virtual media day scheduled for Monday. At this point, it’s unclear what anyone would even say as the league is now the last Power Five conference to unveil its plans.

With the SEC going to 10 games, the Big 12 realistically can’t play a full 12-game schedule for competitive reasons, even though schools need all 12 games for budgetary concerns. Why should Big 12 teams play 12 games if everyone else is playing 10 and still potentially getting invited to the College Football Playoff party?

In explaining its decision, the SEC cited trends in coronavirus cases in the league’s 11-state geographic footprint along with state, local and campus restrictions on large gatherings. The SEC had also previously announced that volleyball, soccer and cross country would be postponed through Aug. 31.

“The safety of our team will be the highest priority throughout the season, but we are also excited that our players will have the opportunity to compete and play this season,” Alabama coach Nick Saban said in a statement.

News of the SEC’s upcoming decision leaked Wednesday through a report from Sports Illustrated. By nightfall, it was thought in College Station that Texas A&M was likely to add Florida and Missouri to its schedule, the next two teams in its SEC schedule rotation, a source familiar with the situation said.

The SEC said a new schedule “will be announced at a later date” upon approval by the league athletic directors.

“This is the right decision for the SEC, our athletics program and most importantly the well-being of our student-athletes,” A&M athletic director Ross Bjork said in a statement. “An ‘SEC-only’ schedule gives us clarity, hope and optimism as we approach the weeks and months ahead.”

Bjork did say that A&M’s annual game with Arkansas, normally held at AT&T Stadium in Arlington, would be moved to Kyle Field. A&M is the home team this season.

Speaking of neutral-site games, one Texas source said “nobody’s given serious thought” to what would happen if the annual Texas-Oklahoma game had to be moved from Dallas. Going home-and-home for two years is almost considered a “nuclear” option, another UT source said, meaning it’s only to be used as a last resort.

Playing at the Cotton Bowl in Dallas could be ultimately determined by city officials there, a UT spokesman said.

Texas officials are already looking at going with a 25% stadium capacity for home games. Interim UT President Jay Hartzell said the athletic department is now modeling that after a request from the UT System Board of Regents chairman.

“The challenge with UT Football at 25% capacity… if the prevalence of disease on game day is similar to today, with 25,000 fans we can expect more than 100 of those fans to be COVID-19 positive … and then it multiplies,” Escott tweeted Thursday. “Let’s stick to watching football on TV this Fall!”

And so Texas coaches and players must continue to wait. The Horns went through photo day as players shared various individual shots all over social media.

Quarterback Sam Ehlinger at least has the right mindset. “ We’ll be ready to go, just let us know,” he tweeted.