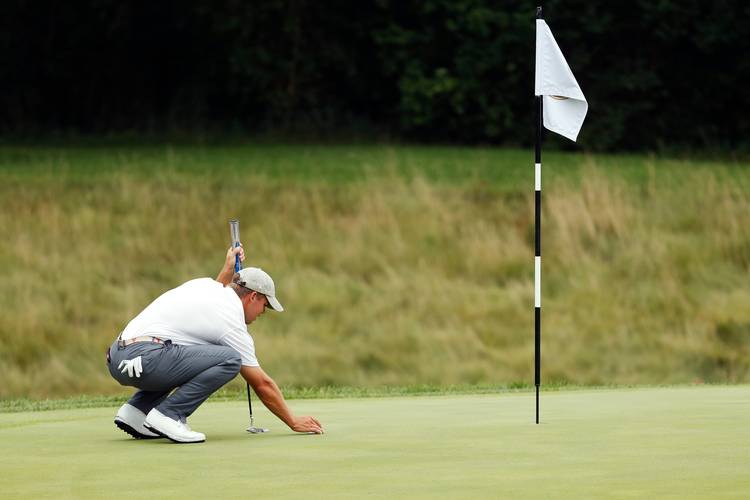 Texas' Pierceson Coody lines up the ball to putt during the 2020 Western Amateur Championship at Crooked Stick Golf Club in Carmel, Ind., on Saturday. He became the seventh Longhorn to win the event, the first since 2018. (Grace Hollars/Indianapolis Star)

CARMEL, Ind. — Pierceson Coody and his caddy walked down into the bunker knowing that the next chip shot would be tough. He led Rasmus Neergaard-Petersen by one stroke, but Neergaard-Petersen had worked back from two strokes down the previous hole. So, Coody said he’d be lying if some panic didn’t settle in as he saw his shot from the tee veer off the green on Saturday.

But when he got into the bunker, he looked at his caddy and then aimlessly left and right.

They couldn’t find the ball.

The ball had fallen into a drain and Coody had to take a drop, but the ensuing chip and putt to finish was the best play near the green on a day where both finalists at the 2020 Western Amateur Championship struggled with their short game. Coody, a junior men’s golfer at Texas, became the seventh Longhorn to win the tournament. Cole Hammer — Coody’s former roommate at UT — won it in 2018.

“I kind of had a feeling he was going to make it,” Neergaard-Petersen said of Coody’s last putt. “He had a great chip.”

The setting was unlike what the golfers experience during their college seasons. Just 10 minutes after the second semifinal teed off, the green once occupied by a group not large enough to call a crowd was completely barren. The Western Golf Association chairman Kevin Buggy, wearing a green jacket, announced the pairing as they hit the tee. He didn’t need a microphone. His voice at just a slightly higher volume reached every corner of the green.

The small crowd seemed to symbolize the effect of a nationwide pandemic on the event, leaving nothing but small chatter and game noise. But then that cleared. And there was only a light wind.

But the conditions — moist, chilly, yet not too much wind — made for a nice playing environment off the tee. Yet the struggles on the green were universal for all four players who started the day with a semifinal match. After going into the back nine of his semifinal up by three strokes, Neergaard-Petersen lost much of his lead on poor turns on putts. He held off Castillo, but the short game troubles plagued both players in the final. On hole seven, Coody placed a strong drive onto the green and had just nine feet to travel to the hole. Instead of sinking the shot and going up three strokes, however, he three-putted the hole and remained just one up on Neergaard-Petersen.

Everything seemed on a line, but balls rolled left. Balls rolled right. Balls fell short. Neither player could figure out the last-second change of speed and direction even as they shot nearly perfect off the tee and on the fairway. Up by just one stroke, Coody missed a 10-foot putt on hole 13 and Neergaard-Petersen had a chance at an even shorter putt to tie the match. Yet his putt rolled wide and he ripped the club up to his shoulder.

“My putts wouldn’t drop,” Neergaard-Petersen said. “I was hitting a lot of good shots and they just were not going into the hole.”

Coody capitalized. He kept his lead, and then expanded it by a swing by the 16th hole. Neergaard-Petersen took back the stroke he lost, and Coody bounced the next one into the bunker.

Even with the pause, the drop, the difficult shot, Coody chipped the shot back onto the green 15 feet from the hole. Coody just needed to tap it in. To put all the pressure on Neergaard-Petersen. To make his six-foot putt seem much further.

“I finally got one to the hole,” Coody said, “and it went dead center.”