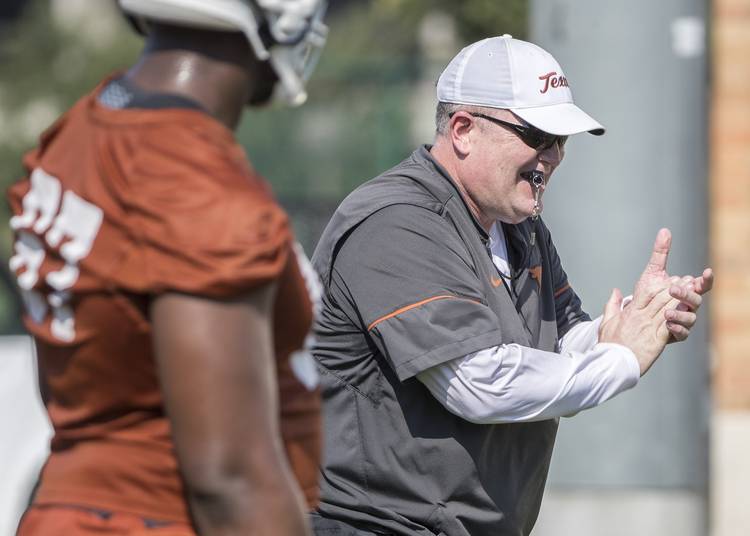 Skill set: Myslinski possesses a quick first step for an offensive lineman approaching 300 pounds. He does a great job staying low and maintaining solid leverage. He also knows how to maximize his strength, which is likely attributed to his father being a former pro and a current strength and conditioning coach. Myslinski plays with a mean streak. He finishes plays and appears to take satisfaction in bullying his opponents. He also moves well in space and can be used to pull or in the zone game.

Myslinski isn’t the biggest center in the country, but he’s a hard-nosed prospect with pedigree. The Longhorns missed out on their top center prospect in the cycle when James Brockermeyer picked Alabama over Texas, along with his twin brother, five-star offensive tackle Tommy Brockermeyer. Myslinski is a fantastic pick up for the Longhorns considering Hand had to shift his focus later in the cycle. Texas managed to make up time and beat out several Power Five programs for Myslinski.

Immediate impact: Each of Texas’ offensive line commits since the 2018 cycle were afforded a year to redshirt and acclimate to the rigors of playing in the trenches at the college level. That’s a sign of healthy depth in the offensive line room. Myslinski will be no different. He’ll be allowed to redshirt in 2021 to mold his body, continue to refine his technique and learn the system.

Fitting into the program: Myslinski grew up in a household with a football coach with NFL experience. That should serve the young center well in his adjustment to the next level. There shouldn’t be any surprises facing Myslinski, though, transitioning to college football is never easy for a teenager. His work ethic and love of football would be welcomed into any locker room across the country.

Recruiting at the position: Myslinski is the second commitment for Texas along the offensive line, joining four-star offensive tackle Hayden Conner. Myslinski is the fifth pledge from out of state. The class ranks 12th in the nation and first in the Big 12. He’ll be the only center Texas takes in the 2021 recruiting class.

Hand’s focus shifts to filling out his tackle and guard positions. His top target on the interior is Bryce Foster, a four-star from Katy Taylor. Duncanville four-star Savion Byrd is the top-rated uncommitted prospect at offensive tackle in Texas. Byrd and Foster are ranked inside the top 15 of the 2021 Fabulous 55.