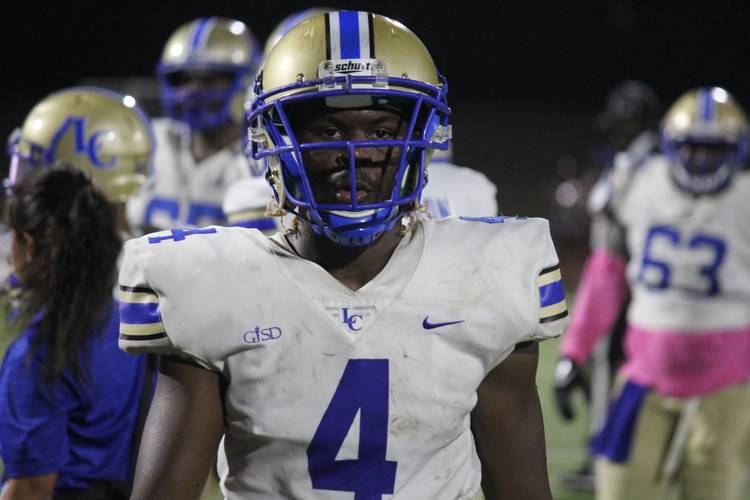 The Longhorns aren’t done. Tom Herman and his coaching staff are still in the mix for roughly a half-dozen of the uncommitted prospects on the list. Even with the COVID-19 pandemic restricting visits for players and coaches, 42 of the 55 players are committed.

Texas’ class consists of 15 members. It ranks 12th in the nation and first in the Big 12. Herman has signed a top-10 class in each of the past three cycles.

Johnson and Camar Wheaton are the top two running backs in the class. The national recruiting services like 247Sports rank Wheaton higher than Johnson. I’ll take Johnson, though we’re all admittedly splitting hairs for two elite prospects. Johnson gets my nod because of his consistency against a higher-level of play. He was an Associated Press second-team all-state selection as a junior and is a two-time all-district selection.

Johnson has an impressive list of offers. He’s rushed for more than 3,000 yards in his two-year prep career and is considered a national top-50 talent as a borderline five-star prospect. The Longhorns are battling familiar opponents for Johnson; it appears to be a three-team race between Texas, Texas A&M and Oklahoma.

Oklahoma is leading for the nation’s fourth-ranked guard. Foster is a bully at the point of attack, overmatching defenders with his brute strength and ability to win leverage battles. He’s also a potential state champion in the shot put and discus. Throwers tend to do a great job as college offensive linemen, and that puts Texas firmly in play because of the Longhorns’ quality track program. Foster’s teammate, Hayden Conner, is pledged to the Longhorns, as is childhood friend Jalen Milroe.

Texas can’t secure the services of both Johnson and Wheaton, but the Longhorns do hope to end the cycle with at least one of those players to pair with current running back pledge Jonathon Brooks. Wheaton is a speedster with legit track speed in the 100- and 200-meter dashes. He was the District 10-6A overall MVP as a junior and the district’s newcomer of the year as a sophomore. The Longhorns and Sooners are the front-runners, as well as hometown SMU.

Texas entered the cycle with offensive tackle Tommy Brockermeyer as the top priority at the position, but the five-star UT legacy and his twin brother James, a four-star center, chose Alabama. That places a bigger emphasis on adding Byrd. Texas signed his former teammate, quarterback Ja’Quinden Jackson, in the 2020 class, which gives the Longhorns an advantage. SMU is firmly in the mix here for the Dallas native. Landing Byrd would take some of the sting away from losing out on the Brockermeyers. Byrd played defensive tackle as a junior. He started at offensive tackle as a sophomore and that’s where his college future lies.

Texas holds as many pledges at wide receiver in the 2022 class (1) as it does in the 2021 cycle. That needs to change for the new offensive staff. The lone pledge in the current cycle is Casey Cain, a three-star from Louisiana. Jackson would be a welcome addition to the class. He’s a big, strong prospect with enough size to play outside receiver. He moved to Royse City from Lancaster prior to his junior season. He caught 61 passes for 889 yards and six touchdowns as a junior at Royse City, earning first-team all-district honors.

The Longhorns are among the top schools for Mukuba, a local prospect with an impressive offer list. He was one of five players to debut on the updated version of the Fabulous 55. Mukuba was a two-way starter for LBJ as a junior, earning first-team honors on offense and second-team honors on defense. Safety is his long-term position with Texas battling it out with Clemson and Oklahoma.

Cooks is a long-time target for Texas. He was announced as the program’s top priority at linebacker during a visit to campus before the pandemic halted travel. He’s an athletic linebacker with a high upside. He helped Shadow Creek win the Class 5A Division I state championship as a junior. His former teammate, safety Xavion Alford, signed with the Longhorns in 2020.