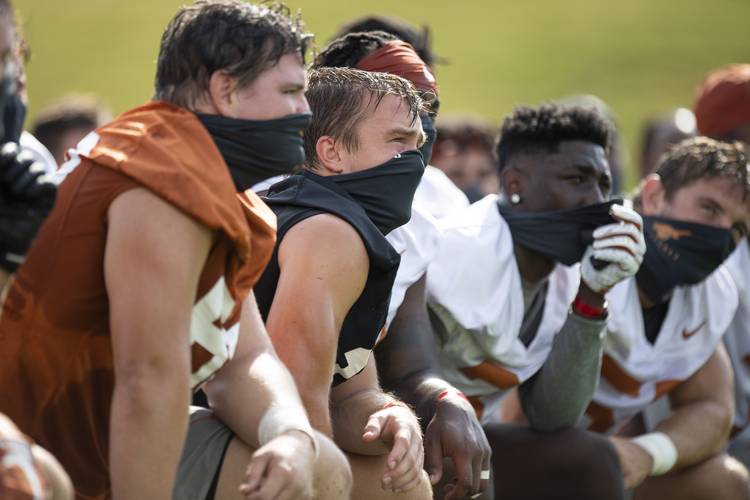 Texas quarterback Sam Ehlinger, center, kneels while he and teammates listen to the coaches during the first day of practice for the 2020 season on Friday, Aug. 7, 2020. Photo by Texas Athletics

Friday was Texas’ first day of practice for the 2020 football season, which sure sounds normal. But this being 2020, normal is subjective. It’s a state of mind, perhaps.

“Flexibility,” Longhorns coach Tom Herman said. “That should go in there with mitigation strategies, bubbles and pandemic as words of the year for 2020.

“I told our coaches very early when this thing first started that things are changing so fast and so often, if we plan anything beyond a two- to three-week stretch, we’re crazy. We’re wasting brain cells,” he added. “So we’ve got a couple weeks planned out, knowing that we’re going to get a lot of information dropped on us here in the next five to seven days.”

Quarterback Sam Ehlinger planned on 2020 being his year for a Heisman run. Joseph Ossai had it all mapped out; this was the season he moves from linebacker to the new “jack” defensive end spot off the edge. There should be a terrific battle at cornerback, and seven new assistant coaches are champing at the bit.

“We still don’t know what’s our rescheduling policy? What’s the percentage of players that need to be unavailable for you to have a no-contest?” Herman said. Instead of a post-practice scrum with reporters, he was talking via webcam. Reporters and photographers were not allowed to attend practice and won’t for the foreseeable future.

Zoom is the five-star recruit on every team’s roster.

“Who are we playing? When are we playing them? How many fans? I mean, there’s so much information we still don’t know,” Herman said. “Again, we’re just trying to take it in kind of two-week chunks and adapt as we go.”

At least Herman can hand off most of those issues to athletic director Chris Del Conte. The Big 12 has yet to release the revamped 10-game schedules. UT will play all nine conference games and one non-conference opponent. That could come by late next week.

A school source said Texas is likely to play UTEP on Sept. 12, but it has not been set in stone. The order of the remaining nine games could be rearranged as well. So it’s not a given the Texas-Oklahoma game will happen as previously scheduled on Oct. 10, for example.

Control what you can control, as Herman is wont to say. That’s what this fourth-year coach is doing, too.

Herman said he “felt some gratitude” to school leaders and health professionals just for getting the Longhorns in position to practice at all. If freshman Bijan Robinson runs through defenses like a cotton swab through your nasal cavity, perhaps a championship awaits. Football players will be tested for COVID-19 twice a week throughout the season, the school announced.

UT has administered 153 coronavirus tests among five teams — football, men’s and women’s basketball, volleyball and soccer — over the past three weeks. The school reports no new positive results.

Herman said running back Daniel Young was the only player “weighing his options” over pandemic concerns and opting out at the moment. “Whatever he needs from us, he’s going to get,” Herman said.

Equipment mangers have installed full face shields on every player’s facemask. A majority of the players are also wearing things around their neck to raise up for face coverings during breaks. Players stay six feet apart when they can, and there are no more huddles.

“We hadn’t huddled in a long time.,” Herman joked. “We were ahead of the curve.”

Still, just getting on the field Friday was a major step forward. Players had been going through voluntary workouts, lifting sessions in makeshift weight rooms and endless online Zoom meetings.

“I think for the most part, our guys are pretty used to that new normal,” Herman said, “and this was another step in getting us back to something that feels like it was the way things used to be.”

Don’t kid yourself about Friday being just a practice. Or that football is just a game. Some players probably needed a return to normalcy. Administrators are becoming more aware about issues like depression and openly talking about it.

“I’ve had personally a ton of one-on-one meetings with our guys to just listen,” Herman said. “I think that’s probably the biggest thing is listen.

“I mean, raise your hand if you’ve been through a global pandemic before that’s lasted six months,” the coach added. “Nobody has, right? So we’re all kind of going through this for the first time together. And I think the kids are very cognizant of that and they don’t hold us to a standard that is unreachable in terms of us having all the answers.”

There will come a time to talk about Ehlinger’s Heisman chase. The running game should be fine with Keontay Ingram, Robinson and Roschon Johnson. Left tackle Sam Cosmi has high draft potential as a junior. On defense, Ossai’s move to the edge is a welcome sight after a down year devoid of much quarterback pressure. Herman openly admitted that “production and depth” is one of his concerns at linebacker, but there’s a ton of talent in the defensive backfield.

Still, Friday, when viewed in its own silo, was a start unlike any other. The first few practices are in shorts, with shoulder pads coming later. Texas is scheduled to put on pads next Wednesday.

“We haven’t practiced in eight months,” Herman said. Texas’ spring practice was wiped out by the pandemic.

“December 29, I looked it up, was the last time we had an entire team on the field for a practice,” he said. “And it was fun. And it was cathartic. It was therapeutic. And I know our guys really, really enjoyed being out there.”