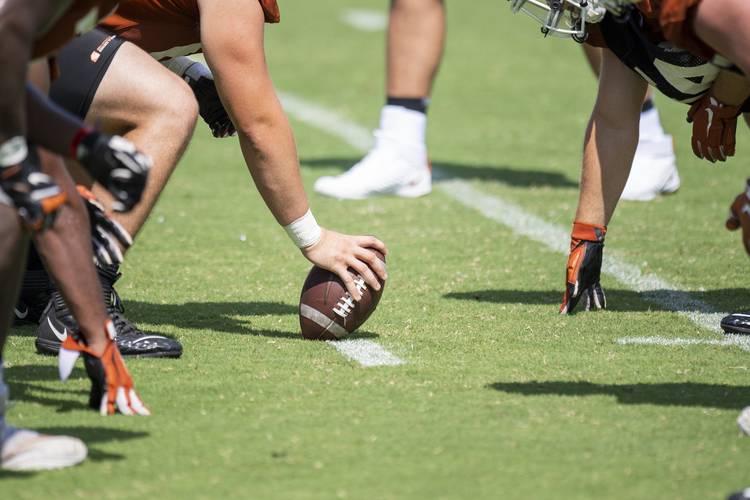 Texas linemen prepare to face off against each other on the first day of practice for the 2020 season on Friday, Aug. 7, 2020. Photo by Texas Athletics

Last season wasn’t so hot. Texas couldn’t generate consistent a pass rush and with widespread injuries in the secondary fell to ninth in Big 12 pass defense.

So Texas is going back to a four-man defensive front this season, led by converted linebacker Joseph Ossai, who will play a hybrid defensive end position called the “jack.” The Horns need a bunch of others to explode out of their stance and rumble into the backfield.

Ossai went wild in the Alamo Bowl playing off the edge. Herman hasn’t seen anything to believe that was a flash-in-the-pan situation. “I can tell you in my expert opinion as well as my entire staff, that’s a fish to water situation,” Herman said of the junior now listed at 253 pounds. “That’s where he belongs.”

There’s a slew of veterans at defensive tackle, like Keondre Coburn and Ta’Quon Graham. Sophomores T’Vondre Sweat, Moro Ojomo and Daniel Carson should get more run, as will redshirt freshman Myron Warren.

Herman also couldn’t help but take note of his two freshmen. “When you stand next to Vernon Broughton and Alfred Collins, whoa. I mean, whoa!” Herman said. “Those are big, big, strong humans.”

Bijan Robinson first look: There’s an argument to be made that running back Bijan Robinson from Tucson, Ariz., is the most anticipated recruit Herman has signed in four seasons. He was a five-star, all-everything star wanted by practically everyone.

“He’s what they’re supposed to look like,” Herman said. “He’s 18 going on 24 in terms of the maturity that he has, not only mentally but physically. You look at his body and it looks like a kid that’s been through a Yancy McKnight offseason for a good three to four years, and this is an 18-year-old kid showing up from Tucson, Arizona. He’s everything you want.”

Whittington, Dorbah sit: Herman said all scholarship players went through Friday’s first practice except running back Jordan Whittington and linebacker Prince Dorbah. They were held out as a precaution. Running back Daniel Young is also sitting out due to COVID-19 concerns.

While Herman did not elaborate on their injuries, the coach said some issues were to be expected after players went an extended time working out on their own.

Whittington played in the season opener last season and then missed the rest of the year with a groin injury, something that needed to be cleaned up from high school wear and tear. He was redshirted.

“Anytime a guy has to spend that long without a strength coach, you’re bound to have a few bodies that don’t react well to that. And we did,” Herman said. “We’re on the other side of it now and feel good about moving forward.”

Texas had the option of moving its season opener up to Aug. 29, much like Oklahoma did. But Herman said Herman said the Horns wanted more time to prepare, especially after losing spring practice to the pandemic. UT is likely to start the season on Sept. 12 against UTEP.