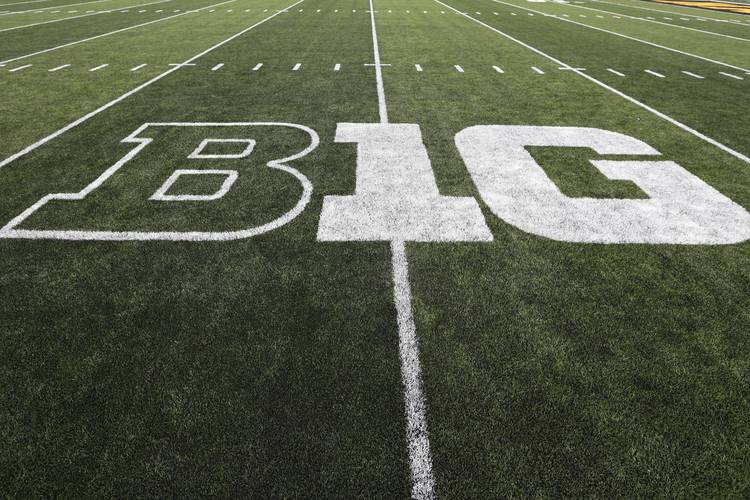 In this Aug. 31, 2019, file photo, the Big Ten logo is displayed on the field before an NCAA college football game between Iowa and Miami of Ohio in Iowa City, Iowa. (AP Photo/Charlie Neibergall, File)

Everyone with strong opinions and itchy Twitter fingers weighed in Monday as to whether college football should happen this fall. That included players, coaches, governors, members of Congress and, of course, those in the West Wing.

“The student-athletes have been working too hard for their season to be cancelled,” President Trump tweeted, followed by the hashtag #WeWantToPlay.

The Wild West nature of the day felt like conference realignment all over again. The Big Ten reportedly voted 12-2 to end the season, then a spokesman walked that back and said no vote was taken. SEC Commissioner Greg Sankey encouraged patience, and nothing was decided by the Big 12.

The Mountain West canceled its fall season and hoped to try again in the spring, according to Stadium. It was the second FBS-level conference, along with the Mid-American, that’s pulled the plug.

A high-ranking Texas source told the American-Statesman the Longhorns want to play. The school has spent thousands on coronavirus testing, implemented expansive protocols and started preparing for 25% stadium capacity. “They want to play,” the source said.

Big 12 Commissioner Bob Bowlsby told the Statesman that the Big 12’s board of directors are scheduled to meet Tuesday night.

The Big Ten’s decision, or non-decision, sucked up all the oxygen Monday. Word began leaking in the morning about the league’s decision, triggering a day-long drama.

Michigan coach Jim Harbaugh posted a lengthy statement claiming the Wolverines had zero positive tests out of the last 353 administered.

“We have developed a great prototype for how we can make this work and provide the opportunity for players to play,” Harbaugh wrote. “If you are transparent and follow the rules, this is how it can be done.”

Ohio State’s Ryan Day later tweeted, “Swinging as hard as we possibly can right now for these players!! This isn’t over! #FIGHT.”

The Columbus Dispatch reported that incoming Ohio State president Kristina Johnson is in favor of delaying, not canceling, the season. A source told the newspaper that if the Big Ten voted, Johnson would vote “No” on Ohio State’s behalf.

In Nebraska, the school was particularly aggressive. Coach Scott Frost told reporters that if the Big Ten was to cancel its season, “I think we’re prepared to look for other options.”

“Here’s the reality: Many of you think that football is safer than no football, but you also know that you will be blamed if there is football, whereas you can duck any blame if you cancel football,” Sasse wrote. He was once the president of Midland University in Nebraska.

Athletic directors and coaches in other leagues watching this spectacle unfold in real time were shocked.

“Best advice I’ve received since COVID-19: ‘Be patient. Take time when making decisions. This is all new & you’ll gain better information each day,’” Sankey tweeted. “Can we play? I don’t know. We haven’t stopped trying. We support, educate and care for student-athletes every day, and will continue to do so…every day.”

Even Alabama coach Nick Saban weighed in, making it clear he wants to play.

“I know I’ll be criticized no matter what I say, that I don’t care about player safety,” Saban told ESPN. “Look, players are a lot safer with us than they are running around at home.

“We have around a 2% positive ratio on our team since the Fourth of July,” Saban added. “It’s a lot higher than that in society. We act like these guys can’t get this unless they play football. They can get it anywhere, whether they’re in a bar or just hanging out.”

“We NEED football, the country NEEDS football!,” Oklahoma quarterback Spencer Rattler tweeted. “We understand the precautions we have to take every single day for this to happen and we are more than willing to do that. There’s been too much hard work put in to bring everything to a halt. #WeWantToPlay !!!”

Even former LSU quarterback Joe Burrow felt bad about the situation unfolding. “I hope their voices are heard by the decision makers,” he tweeted. “If this happened a year ago I may be looking for a job right now.”