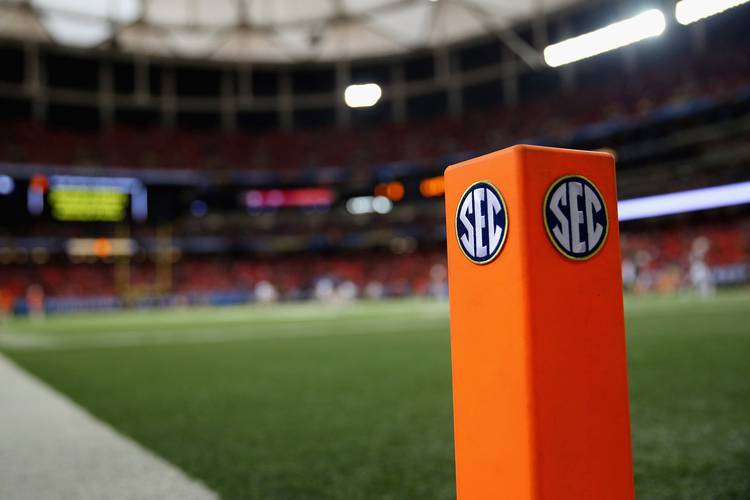 SEC officials continue to preach patience when dealing with decisions about the 2020 season. (Mike Ehrmann/Getty Images/TNS)

“To me, our playbook has been the same the entire way,” Bjork said in an interview Tuesday with the American-Statesman. “Let’s gather data, let’s listen to medical experts, lets follow guidelines put forth by the CDC or the local health authorities. Let’s put a plan together.”

Bjork noted how there was genuine excitement just last Friday when the SEC announced its revamped schedule.

“Everybody was giddy about that. We’re all fired up,” Bjork said. “Some people were happy, some people weren’t. Our schedule, look, it’s all relative because you’re playing SEC teams.”

Texas A&M learned it will host Florida and travel to Tennessee in addition to facing its known eight conference opponents.

“But to then go into the weekend and have the news cycle shift the way it did, there was no new data that we didn’t have on Friday afternoon that would’ve changed the conversations over the weekend,” he added. “The virus is still the same.”

Big Ten presidents and chancellors met on Monday and it was initially reported the league voted 12-2 to cancel the season. A league spokesman later refuted those reports and said no vote was taken. The league is scheduled to meet again Tuesday and possibly make a final decision.

Meanwhile, the other major leagues continue to go slow. SEC commissioner Greg Sankey preached patience via a Twitter statement on Monday. Big 12 presidents are scheduled to meet Tuesday and hear from doctors about safety protocols put in place.

Asked if he believes the SEC will play this season, Bjork was emphatic. “I believe we will.

“I believe there’s a pathway forward that we’ve outlined,” he said. “Is it going to be bumpy and rocky over the next few weeks, it probably will be. But we have a plan. We need to stick to it. We’re doing walk-throughs right now.”

A&M is currently planning on 50% stadium capacity at Kyle Field, which holds more than 100,000 fans. That matches the mandate set by Gov. Greg Abbott. Texas Tech has announced it will have 25% stadium capacity, and Texas is looking at that as well.

The school is currently using local resources for its COVID-19 testing. The SEC is working on a conference-wide contract with a third party for testing during the season, Bjork said.

“We provide opportunities for young people and it’s our job to make this happen in the safest environment possible,” Bjork said. “Until we’re told we can’t, we’re not going to give up.”