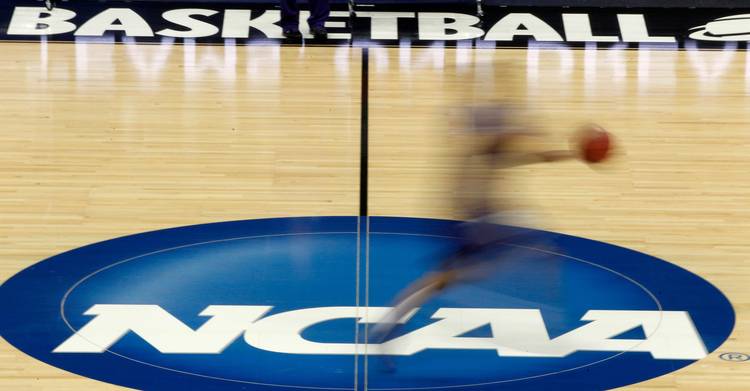 In this March 14, 2012, file photo, a player runs across the NCAA logo during practice at the NCAA tournament college basketball in Pittsburgh. The NCAA Board of Governors took the first step Tuesday, Oct. 29, 2019, toward allowing athletes to cash in on their fame, voting unanimously to clear the way for the amateur athletes to "benefit from the use of their name, image and likeness." (AP Photo/Keith Srakocic, File)

A group of U.S. senators, led by Cory Booker and Richard Blumenthal, on Thursday unveiled outlines of comprehensive legislation that would assist college athletes in ways well beyond making money from their names, images and likenesses.

Guided by what they are calling a college athletes bill of rights, Booker, D-N.J., and Blumenthal, D-Conn., issued a statement saying they will seek to give athletes “revenue-sharing agreements” with the NCAA, conferences and schools, plus the ability to capitalize on their name, image and likeness “individually and as a group, with minimal restrictions.”

The envisioned bill also would create new safety and wellness standards, provide improved health care; attempt to improve educational outcomes and would end the requirement that athletes sit out if they change schools or withdraw from a National Letter of Intent.

“We have to create a system that clearly the NCAA has not been willing to do on its own,” Booker, a former Stanford football player, said in an interview with USA TODAY Sports. “We’re talking to a lot of athletes who have painful stories. These are courageous young people who right now are speaking out — and often facing retribution for speaking out — about their basic rights. I just really respect these athletes for showing such courage and commitment to the larger issues of equity and justice within college athletics.”

This represents the formalization of thoughts Booker, Blumenthal and Murphy have expressed at various times in recent months as the debate about college athletes’ name, image and likeness rights has progressed from state houses to Capitol Hill. California, Colorado, Florida and Nebraska have passed laws that would aid athletes’ ability to profit from their NIL.

The NCAA’s Board of Governors, its top policy-making group, has approved this idea in principle. The Division I membership is debating how to implement it, including strong consideration of a variety of limits on the types of deals athletes could make. Meanwhile, the NCAA has said it wants federal lawmakers to let the association make new NIL rules that would be applicable in all states and to provide it protection from antitrust challenges to those new rules.

This is basically the intent of a bill introduced in June by Sen. Marco Rubio, R-Fla.

Rep. Anthony Gonzalez, R-Ohio, a former Ohio State and NFL wide receiver, also has been working on a bill that he said this week he is “pretty close” to introducing.

Booker and Blumenthal have made clear they are not interested in allowing the NCAA to get what it wants on the NIL issue without addressing, under Congressional supervision, what they see as multiple areas of inequality for athletes.

“We are in a situation now because of the activism of athletes and a lot of state leaders saying, ‘Enough is enough — it’s wrong’,” Booker said. So, the NCAA needs “federal preemption. … Now, they don’t want the federal government to work with them. They just want the federal government to give them the authority to create a standard. But that to me, is unworkable because they have failed to address so many of these issues in the past.

Thursday’s statement says the senators will seek to provide athletes with “lifetime” scholarships to finish an undergraduate degree, a benefit many of the wealthiest college sports programs already provide. Booker said the opportunity to get graduate degrees is “something that the athletes want to put at the center of the conversation and negotiation. I would have no objection to that.”

The statement says the senators want to “increase financial assistance for current and former college athletes with medical bills and out-of-pocket expenses from sport-related injuries and illnesses from COVID-19.” They want athletics departments to provide “more detailed annual public reporting” about their finances and the number of hours athletes spend on their sports. They also want a “permanent commission” of current and former athletes and various other experts “to give athletes a meaningful voice” in NCAA rules-making.

The NCAA’s executive staff and the Division I member schools have attempted to address each of those three areas over the past decade, although the senators want to see more.
Asked when these concepts will become a bill, Blumenthal said: “I hope we can do it this session, but our vision is a long one. We’re taking the long view and building toward the next session of Congress. The overall goal is to persuade colleges to do the right things, but adopt legislation if necessary. And this framework should be in legally binding form in some way.”