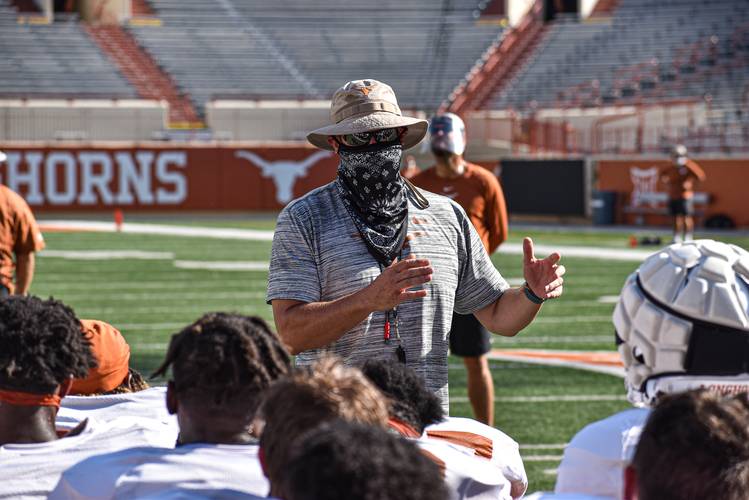 What happened this week in college athletics was equivalent to a category five hurricane.

Widespread COVID-19 cancellations wiped out the fall semester, and make no mistake, the financial destruction from canceling football will cause permanent damage for some. The Big Ten and Pac-12 will ultimately be OK, others not so much.

All told, the Longhorns wound up having a rather incredible week.

Players learned Wednesday that their season is still on with a new 10-game schedule, starting with UTEP on Sept. 12. Then on Friday, coach Tom Herman landed the nation’s No. 1-ranked recruit for 2022 — Southlake Carroll quarterback Quinn Ewers. Saturday brought about the team’s first full intrasquad scrimmage since December.

It also crystallized one indisputable fact about this unpredictable year: If Texas is going to play, they’re going to keep score. And if they’re keeping score, the Horns expect to win.

“They’re going to hand out a Big 12 championship trophy at the end of this season, as it’s currently scheduled. I think we all need to preface it with the asterisk,” Herman said Saturday. “But it hasn’t been difficult, I’ve got to be honest with you. These guys are eager to play.

“They understand that this inconvenience is not unique to the University of Texas, and I think that calms a lot of apprehension and frustration,” he added. “We realize that we’re doing the same things as everybody else in the country and are held to similar standards to everybody in the country.”

Herman said about 90% of the team is signed up for online-only classes. The university has said only a small fraction of the entire student body will be walking the campus grounds in September. It’ll be as close to an NBA-style “bubble” environment as anyone can expect.

“I think it has been said by many people, but I’ll say it again,” Herman said. “The most mature, level-headed, rule-following teams are going to be the ones that have the best opportunity to win at a very high level this season.”

While other leagues were swept away by the storm, Big 12 officials barricaded themselves with their own medical data and held tight. So did those in the ACC and SEC.

Herman said no Big Ten or Pac-12 players have reached out to UT coaches looking to transfer. The Horns likely couldn’t take them anyway. Herman said he’s at either “82 or 83” scholarships; 85 is the maximum. The staff likes flexibility for high school recruiting purposes.

The NCAA has already announced that any athlete who opts out over COVID concerns will have their scholarship protected. Herman confirmed that Texas still has only two players —running back Daniel Young and defensive lineman Marqez Bimage — opting out.

But Herman also acknowledged Saturday for the first time that his players are concerned.

Herman said before the Big 12’s mid-week announcement “there were a lot of guys that needed some talking to, some assurances that this was going to be OK and that they didn’t have to play if they didn’t want to or if they felt uncomfortable, certainly.”

Those who did choose to play, Herman said he went over “what was required.” That means wearing a full face shield attached to their facemask while at practice. When players remove their helmets, they have to cover their face with cloth masks or neck wraps.

Fans should get used to this, too. The school hasn’t officially confirmed a 25% stadium capacity this fall, but every fan will be required to wear a mask to enter Royal-Memorial Stadium. Additionally, the university has said all students, faculty, staff and visitors must wear a mask on campus this fall.

So with all that said, how’s practice going? You know, the actual football?

“Our guys are very hopeful,” Herman said. “Their energy level has been great from day one on the field, and I think the Big 12 renewing their commitment to do everything they can to get this season underway and going to hold out for as long as possible before making an ultimate decision, I think that just added a little confidence to them and pep in their step more so off the field than on the field.”

Herman said the first- and second-team units had about 40 snaps each on Saturday. The third-teamers got about 12-15 snaps. Herman said it was balanced overall with each side having big plays.

No coach has ever praised his team after the first scrimmage, which is why Herman called it “sloppy.”

“I mean, the effort was great,” he said. “The one thing that right now I would have been disappointed had we not seen great effort, and we showed that today. But some false start penalties, pre-snap penalties from the offense, a couple pass interferences on defense that were a bit sloppy.”

Herman said linebacker Juwan Mitchell and receiver Al’Vonte Woodard were both being checked for head injuries. Freshman receiver Troy Omeire also suffered a knee injury and was being examined.

He’s never been the type who breaks down every single player who did well in any scrimmage. But he did note that some in the freshmen class have turned heads, including defensive newcomers Alfred Collins and Vernon Broughton.

“Overall, the entire group of that class has done a really good job thus far through eight practices,” Herman said.

And so begins another week of preseason camp. The pandemic has upended everything, so it feels like getting through each week is an accomplishment itself. Herman expects to build in some extra down time since the Horns will play only two games through the end of September.

Pandemic or not, Herman’s goals remain the same.

“Again, we have the same roadblocks everybody else does.,” the coach said. “That won’t change throughout the course of the season. So our goals right now are as they always have been, which is to win a championship.”