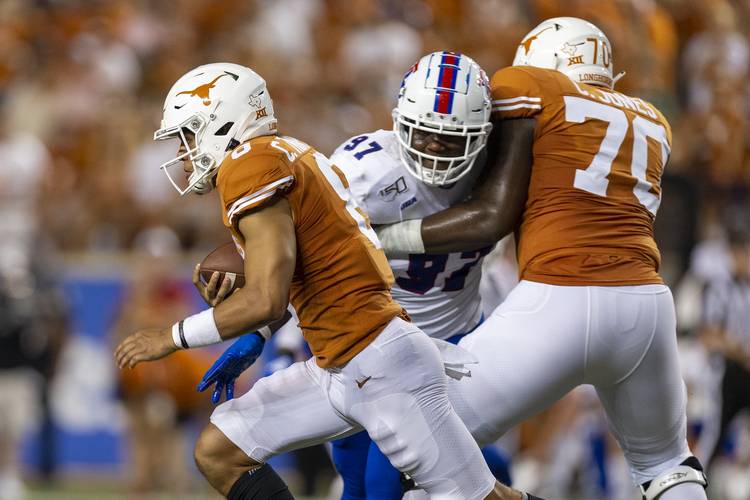 Texas quarterback Casey Thompson (8) picks up a block from teammate Christian Jones (70) during a game against Louisiana Tech at Royal-Memorial Stadium on Aug. 31, 2019. Jones is among those competing for a job on UT's offensive line this season. [Stephen Spillman for Statesman]

Texas returns eight starters this season to what was a top-20 offense that averaged 35.2 points and 465.8 yards per game.

The Longhorns don’t need a new quarterback. Sam Ehlinger is back. And they have a starting running back, with Roschon Johnson and Bijan Robinson pushing Keaontay Ingram for carries. The receiving corps needs a makeover, but Brennan Eagles started seven times last season.

There are a couple of openings on the offensive line, though.

There are about six Longhorns in play for the two spots — one tackle and one guard.

“That one will go the distance, I would imagine, for a while here to make sure that we get the best five out there,” Herman said.

Johnson and Jones were backup tackles last year. Moore has practiced as a tackle in the past. Herman said Okafor and Hookfin are working out as tackles and guards. Tyler, traditionally a guard, also is getting reps at tackle.

Among that group, only Okafor has ever started a game.

Additionally, Herman confirmed that two players have now opted out of the upcoming season due to concerns about the coronavirus pandemic. It had been previously reported that defensive lineman Marqez Bimage and running back Daniel Young would not play.

“Obviously we’re in constant communication with them,” Herman said. “They’re doing a great job of staying in shape. They will do a great job with their academics.”

Recruiting alignment: Texas received a commitment from Southlake Carroll quarterback Quinn Ewers on Friday. Ewers is ranked by 247Sports as the top-rated recruit in the 2022 recruiting cycle.

Since he has not yet signed, rules prohibited Herman from mentioning Ewers by name on Saturday. He was asked, however, how his vision of a quarterback recruit has meshed with what new offensive coordinator Mike Yurcich wants in a prospect.

Herman said that was a big talking point during the interview process with Yurcich. Ewers is the first quarterback to commit to Texas since Yurcich’s hire in December.

Pandemic or not, Texas, Tom Herman still have the same goal: ‘To win a championship’