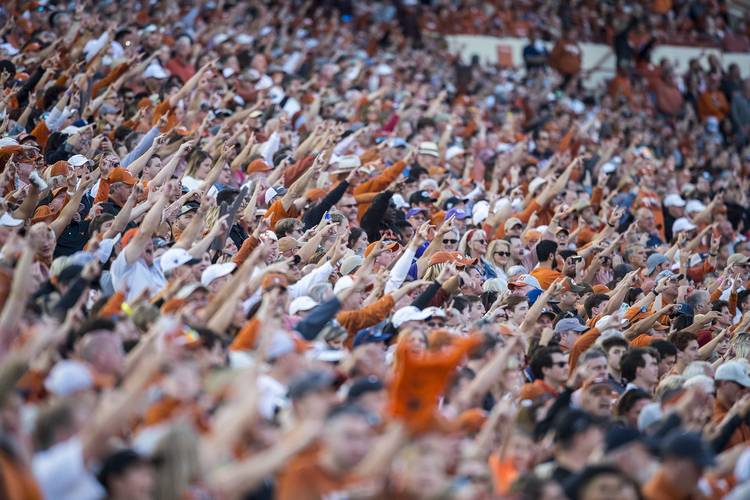 Royal-Memorial Stadium’s current capacity is under 100,000 because of south end zone stadium construction. It’s expected that 25% capacity would be about 24,000 tickets.

Gov. Greg Abbott has issued a statewide mandate of a 50% stadium capacity because of the COVID-19 pandemic. But interim UT President Jay Hartzell first floated the idea of the school looking at a 25% model in late July.

Hartzell told the campus via email that the smaller capacity request came via the UT System Board of Regents. “The analysis of this new crowd size target is a reflection of the consistent change and uncertainty that has come with the COVID-19 pandemic,” Hartzell wrote on July 29.

Texas Tech has already announced it will use a 25% seating model. Texas A&M is still planning on going with 50% capacity.

UT began notifying season ticket holders in recent days where their new season location will be. Del Conte said the school was ready to “ready to rock ‘n’ roll” this season, but with new guidelines in place to keep fans safe.

“We are working to keep your season ticket location as close to your usual seats as possible; however, all locations will be adjusted to ensure recommended social distancing,” Del Conte wrote to season ticket holders Sunday. “We will discuss this during our calls but you may not be in your usual seats in 2020.”

The Texas-Oklahoma game will look dramatically different this season. Both schools are likely to adhere to the 25% stadium capacity level, according to a source familiar with the schools’ plans. That would mean both schools would get 12.5% of the stadium capacity, which would be slightly more than 10,000 per school.

“We used Texas-OU ticket limits to allow as many season ticket holders as possible to attend games, so your original ticket order may have been reduced,” Del Conte wrote Sunday.

Once again, Del Conte asked fans wanting to opt out to consider leaving their money with the school.

“If you need to opt out of your season tickets this year or know you will not attend in-person football games,” Del Conte wrote, “please consider converting some or all of your 2020 season ticket payment to a tax-deductible gift.”

Texas opens the regular season at home against UTEP on Sept. 12. The Longhorns are scheduled to play four more home games as part of the Big 12 schedule.

Pandemic or not, Texas, Tom Herman still have the same goal: ‘To win a championship’

The Dotted Line: Quinn Ewers set to become only fourth five-star quarterback for Texas since 2000