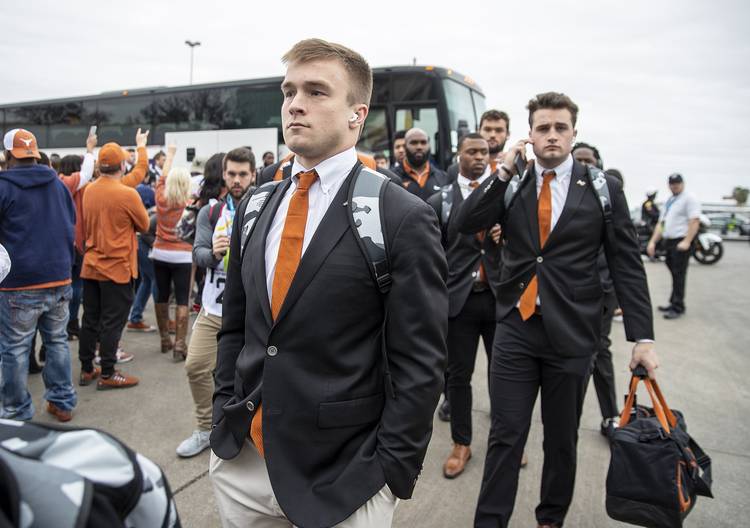 Texas quarterback Sam Ehlinger (11) arrives at the Alamodome to compete in the Valero Alamo Bowl on Dec. 31, 2019 in San Antonio. Ehlinger will be a fourth-year starter this fall. [RICARDO B. BRAZZIELL/AMERICAN-STATESMAN]

With the coronavirus pandemic forcing the postponement of fall activities in many conferences, the idea of a springtime season has become a possibility for some football players.

For now, though, Texas quarterback Sam Ehlinger hasn’t given much thought to if he’d play in the spring.

Unlike the Pac-12 and Big Ten, the Big 12 plans on allowing its teams to play 10 games this fall. So, UT’s fourth-year starter is thinking about the now, not the hypothetical.

“That’s a question that I have not thought about,” Ehlinger said Tuesday. “As of right now, I’m trying to control playing (against UTEP) on Sept. 12th and being prepared for that. If things were to change, then I would evaluate then and see what the circumstances were.”

As he prepares for that UTEP opener, Ehlinger had to face a 30-minute blitz from local reporters. In his first media availability since June 11, he insisted that athletes feel safer on campus due to the athletic department’s safety protocols and diligence with coronavirus testing. He expressed empathy for players in the Pac-12 and Big Ten. And he discussed his budding relationship with new offensive coordinator Mike Yurcich.

What did he have to say about offensive lineman Samuel Cosmi? “I’ve been blessed to have him block for me these past few years.”

How about Derek Kerstetter, the tackle-turned-guard-turned-tackle who will play center this year? “He’s made it a mission to pick up the little details that it takes to play center, and he’s done a great job with that.”

On the field, Ehlinger is the quarterback on the Big 12’s preseason team. For his career, he has thrown for 8,870 yards and 68 touchdowns. Both of those numbers rank second all-time for the program.

Off the field, Ehlinger is a returning captain for a team coming off an emotional summer. On June 4, he was among the football players who protested police brutality during a march to the state capital. A week later, more than three dozen UT athletes demanded the removal of “The Eyes of Texas” as the school’s alma mater due to its history that dates back to the Confederacy. Texas kept the song but athletes no longer have to stick around for it after games. Several Black players — including safety Caden Sterns and linebacker Juwan Mitchell — have said they will leave the field immediately after games.

A lifelong UT fan, Ehlinger has not publicly expressed his feelings about the song. But on Tuesday, he was asked about handling what could be a divisive issue among players. He stressed the importance of a united locker room.

“I would say everything that I’ve been trying to get across to the guys, obviously every voice is absolutely heard and after everybody’s voice is heard, we’ve got to move together as a team,” Ehlinger said. “I think that’s the most important part is we are a team.

“The unity that we can build together because locker rooms, they’re so inclusive and the things that are able to be accomplished in locker rooms are so incredible. I think the underlying theme, though, is that we’ve got to move together as a team on whatever decision is made about anything.”

The Dotted Line: Quinn Ewers set to become only fourth five-star quarterback for Texas since 2000