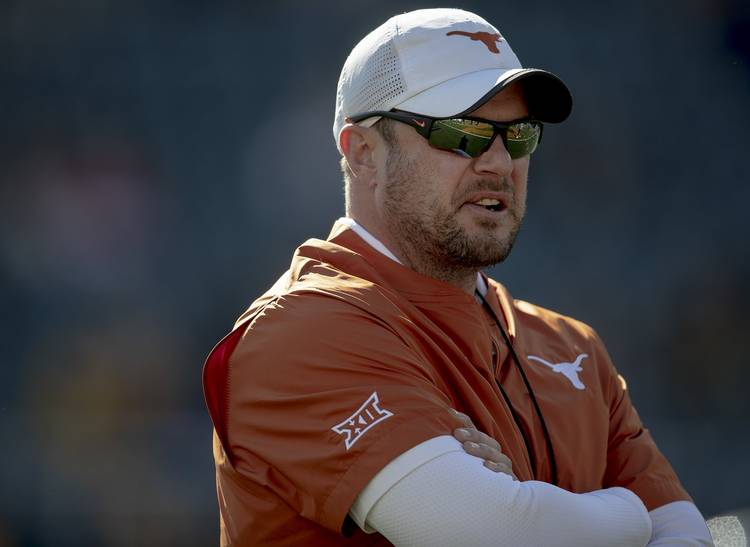 The sheer awkwardness of trying to play football in a pandemic was on full display Saturday.

Texas coach Tom Herman reported that the offense won the day’s intrasquad scrimmage, which lasted somewhere between 30-35 plays. “It’s been a great marriage thus far” with new offensive coordinator Mike Yurcich, and the defense is coming along, he said.

Then Herman admitted the players will have the next two days off, which coincides with UT students returning to campus for the fall semester.

“Hopefully we get everybody back healthy and COVID-free on Tuesday when we resume,” Herman said.

Nothing is normal anymore, but Herman and the Horns deserve real credit for trying to keep it that way. Will Texas even get to the season opener against UTEP on Sept. 12? Nobody can say with certainty, but the Big 12 and those within UT athletics sure hope so.

Even reporters covering the team aren’t sure which path to follow. One question will be about football, the next will focus on the players’ health. Herman said players are being held out if they report any sort of ailment, anything from sniffles to something more serious. Everyone is then tested again for COVID-19. The UT football team had no positives as of mid-August.

There’s been “a guy here, a guy there, a practice here, a practice there,” Herman said of players being held out as a precaution. “It’s been a bit of a roller-coaster, but the guys are trying.”

So, Herman presses forward, worrying only about what he can control.

Start with the offense. Herman praised quarterback Sam Ehlinger, who’s entering his senior season showing more hunger than ever. “When you play it at the level that he’s played for so long, human nature is to get maybe a bit complacent,” the coach said. “And this guy’s got none of that in it.”

Herman doted on the tight ends, a group that’ll be critical with a thin bunch of receivers. And he noted how “the talent is certainly there” at running back.

“We feel like we can win a game with any of those three guys back there,” Herman said. “The thing that is glaring is on the depth. That only three scholarship players are practicing at a very violent, physical position makes you a little bit apprehensive, but they’ve had a really great camp thus far.”

Yurcich is happy to work with all these tools. Herman said his new offseason hire has done a great job “enhancing the offense” and adapting to the Horns’ terminology.

“It’s not like we went from what we were last year, finishing in the top 15 in the country in total offense, to blowing it up and installing the wishbone or something like that,” Herman said.

Although, here in 2020, would that be so shocking?

The NCAA did something rather shocking by announcing that any player who competes this fall will have his or her eligibility protected. Seniors this season can come back as seniors in 2021, juniors can stay classified as juniors and so on.

“I think the NCAA got it right,” Herman said, although he confessed to knowing scant details of how this will actually work for long-term roster management. When the NCAA protected spring athletes’ eligibility, some seniors chose to go ahead and graduate and leave school, moving on with life, so to speak.

Focusing on the here and now, Herman truly can’t see beyond Tuesday. He’s trusting the players understand what’s at stake by staying away from parties, downtown and whatever else lures the 18- to 22-year-old college student.

At least the total number of students on campus will be down this fall. UT has said that about three-quarters of the student body has chosen to take online courses.

If students are staying away from campus, or worse, told to stay away, should Texas be playing football at all?

“I appreciate the question, but I tend not to waste a whole lot of brain cells on things I can’t control,” Herman said. “So I haven’t even formed an opinion on the rightness or wrongness or, you know, the validity of it.

“But I can tell you, yeah, it would definitely help,” he continued. “Just from a sheer numbers standpoint, the less people that are in striking distance of our team, the better in terms of staying COVID-free.”

Thus, the chances of striking a UTEP Miner increase.

The season in front of him, Texas’ Sam Ehlinger looks ahead to UTEP and a united locker room