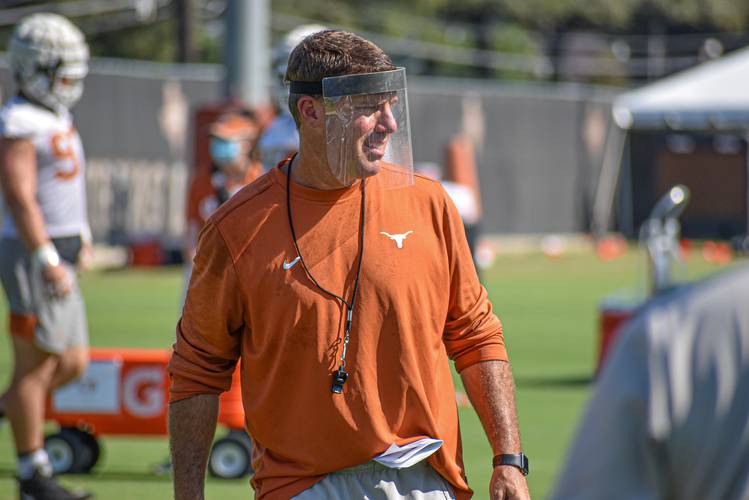 Not Joseph Ossai, UT’s off-the-edge pass rusher. Not Juwan Mitchell, the head of the linebackers unit. Not Caden Sterns, the Longhorns’ “Wolf of DKR” patrolling the secondary.

Maybe those players have been practicing well, maybe not. Trying to determine how August is going is a total crapshoot.

Better be specific, then. “I would like to know some of the players that are standing out in each group,” one reporter asked. Ash said he was a “one-for-all” type of coach.

“Right now, in my opinion, we don’t have anybody that’s gone out and proven to me yet what they’re worthy of doing and being called out specifically for praise,” Ash said. “I know what they’ve done in practice, and I want to see these guys do it in a game before I start to give them a pat on the back publicly. And we’ve had those conversations with our guys, too.”

Ash is inheriting a unit that looked strong at times but wobbled down the stretch. One defensive stop, or lack thereof, meant the difference in a loss at Iowa State. And now that the LSU rematch has been canceled, let there be no talk of what happened on third-and-17 last September.

When all was said and done — and some impressive, eye-popping numbers against Utah were added to the mix — Texas still finished eighth in the Big 12 in total defense. The Horns allowed 27.5 points and 431.5 yards per game.

Presumably, things are looking better since the Horns have gone to a four-man defensive front. Ossai is moving from linebacker to the edge in a new position called the “jack.” A front line featuring Ossai, Keaondre Coburn and Ta’Quon Graham sounds appealing.

The fourth starter? Hard to say, as Texas typically doesn’t release depth charts until game week. If history is any guide, Moro Ojomo, T’Vondre Sweat, Daniel Carson and Myron Warren should be in the mix. Coach Tom Herman has already doted on freshman Alfred Collins, too.

“Our defensive line has to make plays for us,” Ash said. He wasn’t here last season when the Horns failed to produce any consistent pass rush out of a 3-3-5 base formation, but Herman has no doubt filled in the blanks. “They have to be disruptive in the run game. They’ve got to be able to affect the quarterback.”

As for linebacker, Ash echoed Herman’s comments from earlier this month. “That’s been a position group of concern with depth,” he said.

Mitchell is an established commodity, and Ayodele Adeoye had 45 tackles in 13 games last season. DeMarvion Overshown is someone who may benefit from a full-time role at linebacker instead of playing safety.

But this is a unit that was so unpredictable, the previous staff started former walk-on Cort Jaquess in the Alamo Bowl victory and as a way of recognizing his effort at practices and shaking things up. And Jaquess tore it up with five tackles, prompting the obvious question: Where had this guy been all season?

Marcus Tillman Jr. played four games and then suffered a season-ending knee injury. David Gbenda is still listed as linebacker even though he had a tryout at running back last season. Freshman Prince Dorbah, a key signee from Highland Park, should get all the chances possible.

Ash said the coaching staff was able to look at “a lot of guys throughout training camp,” which isn’t exactly a ringing endorsement.

“We’ve got some players that have not necessarily played in games at that position,” he said. “And I do think they’ve got a lot of potential though and are going to be able to make a lot of plays for us.”

So what about the battle at corner? Or safety? Texas had the ninth-ranked pass defense in the Big 12 last season. Again, Ash offered no names. “We’ve got a lot of competition back there in the secondary,” he said. “I can tell you we’re really excited about what we’re doing.”

Well, from looking at the team roster, it’s easy to pick out who should be excelling. In addition to Sterns, Josh Thompson, Anthony Cook and B.J. Foster will definitely be in the mix. D’Shawn Jamison, Chris Brown and Jalen Green, too.

More than anything, this Texas job is a reboot of sorts for Ash. It’s the third time he’s worked on a staff with Herman but the first since leaving Rutgers after an 8-32 run as head coach from 2016-19.

That said, Ash’s reputation as a defensive coordinator at Wisconsin and Ohio State, particularly the Buckeyes’ 2014 national championship year, was tremendous.

His predecessor, Todd Orlando, always said defensive football was a “run-and-hit” business. As long as the Longhorns can do that this fall and beyond, Ash will fit just fine. He will have to talk about who’s on the roster at some point, though.

“I feel like I left it in a better situation than I took it over, and if you can say that at the end of the day, then I’m pleased,” he said. “What did I learn? A lot, a whole lot. That makes me a better coach today.”

Ash said he’s learned “a lot of lessons along the way, and doing the best I can to make Texas better.”

The Dotted Line: Who is the top prospect in Texas for the 2022 recruiting cycle?