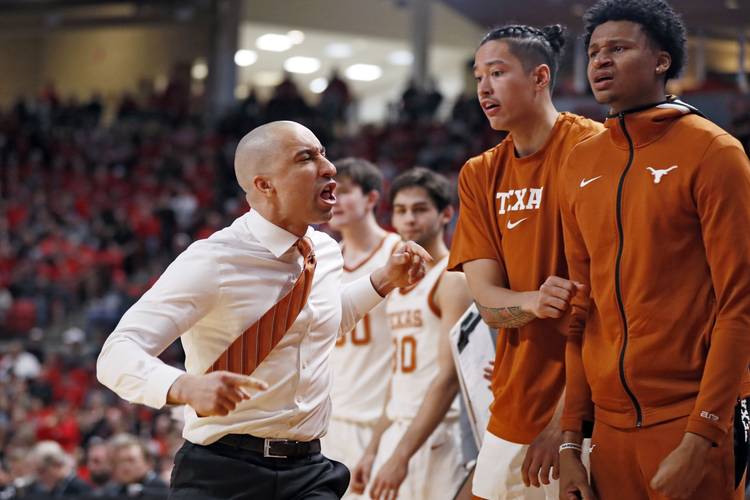 Texas coach Shaka Smart celebrates with his team during the second half of an NCAA college basketball game against Texas Tech, Saturday, Feb. 29, 2020, in Lubbock, Texas. (AP Photo/Brad Tollefson)

Bates, a 6-foot-5 shooting guard, had offers from Kansas, Iowa State, Missouri and others. But the Kansas City native told Rivals he chose Texas in part to play for Smart and have a platform that can benefit off future changes to the NCAA’s rules on name, image and likeness.

Like Mo Bamba once did, Bates sees coming to UT as a chance to shine on a major platform, not just play basketball.

“I’m going to Texas,” Bates told Rivals. “I had a good relationship with all of the coaches, but me and Shaka we connected really well. His energy matches mine, we have the same mindset. He’s very interested in helping all of his players reach their goals and that helps to accomplish the team goals.”

I done made it here, it’d be dumb if I stopped now 🤘🏽 pic.twitter.com/O2Bm3bykpe

A talented shooter, Bates averaged 22.1 points and 5.0 rebounds per game during his junior season. Bates had developed a good relationship with UT assistant Jai Lucas, who is expected to leave his position for Kentucky. Neither UT nor Kentucky have made the announcement official, though.

Still, Bates said he wanted to play “for a Black head coach with everything that is going on.”

“It was very important and I feel like I can help get something started.,” Bates said. “It was important to me to show that I am actually going to do it. I feel like Black coaches don’t get the same opportunities to get good players at their schools. I want to go and start something at Texas and bring back the winning tradition.”

Bates told Rivals he plans on wearing jersey No. 53 at Texas to honor his grandmother Felicia Hurst. She was 53 upon her death.

Per NCAA recruting rules, coaches are not allowed to speak about recruited players until they sign a national letter of intent. Signing day is Nov. 11.