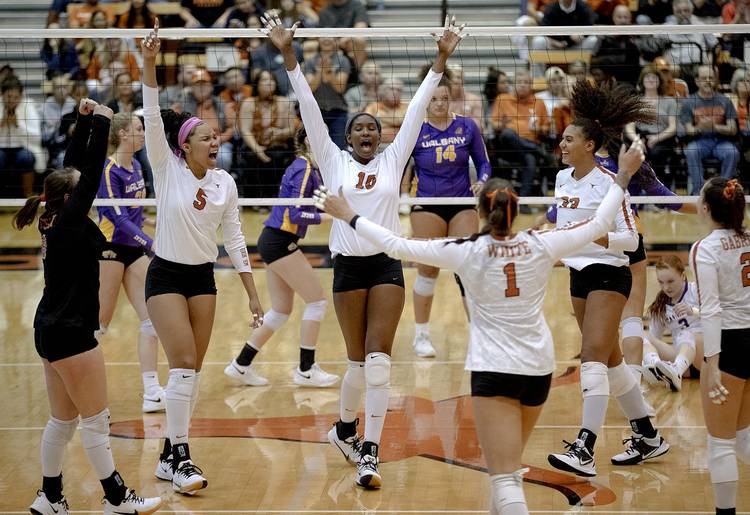 Texas middle blocker Brionne Butler (10) celebrates a block with teammates during a first-round volleyball match against Albany on Dec. 5, 2019 in Austin. [NICK WAGNER/AMERICAN-STATESMAN]

Starting in September, Texas will get a chance to extend its reign on the Big 12’s volleyball courts.

The Big 12 revealed its revised schedule for the 2020 volleyball season on Friday afternoon. The league had already announced that none of its teams would play non-conference matches during this coronavirus-shortened season, so Friday’s reveal featured 16 matches for each of the Big 12’s nine schools.

In previous years, Big 12 schools would play a conference foe at home and also travel to that opponent’s gym during different sections of the schedule. There will be no home-and-home arrangements this season. Instead, the 2020 schedule mostly calls for showdowns on back-to-back nights.

Texas will open its season at Oklahoma on Sept. 24. The Longhorns’ first appearance in Austin has been scheduled for Oct. 1. The Erwin Center will host all of UT’s home games in 2020.

Here is Texas’ schedule for the 2020 volleyball season. The Longhorns’ bye is slotted for the final week of the regular season.

Read more: With Baylor bearing down, Texas once again earns the No. 1 spot in the Big 12’s preseason poll

Earlier this summer, Texas was ranked first in the Big 12’s preseason poll for the 10th year in a row. Over the past nine seasons, Texas has gone 136-8 against its Big 12 competition and won eight conference championships. No Big 12 team has beaten Texas more than twice during that span. Kansas State, Texas Tech and West Virginia, meanwhile, have failed to upend UT once.

Last year, though, Baylor and Texas split the Big 12’s title before entering the postseason as the NCAA tournament’s first and second overall seeds. The Longhorns will get Baylor, the No. 2 team in the Big 12’s preseason rankings, twice at home this season.

The release of the volleyball schedule comes three days after the Big 12 also unveiled its 2020 soccer slate. And like with soccer, it was not immediately clear what this season will mean.

The Big 12 does not traditionally host a postseason for volleyball. The NCAA has already postponed its fall championships since many conferences have delayed their athletic competitions until 2021. A suggestion has been floated about crowning champions in sports like volleyball and soccer during the spring. An explanation, however, is still needed about how that plans would impact the teams that play this fall.