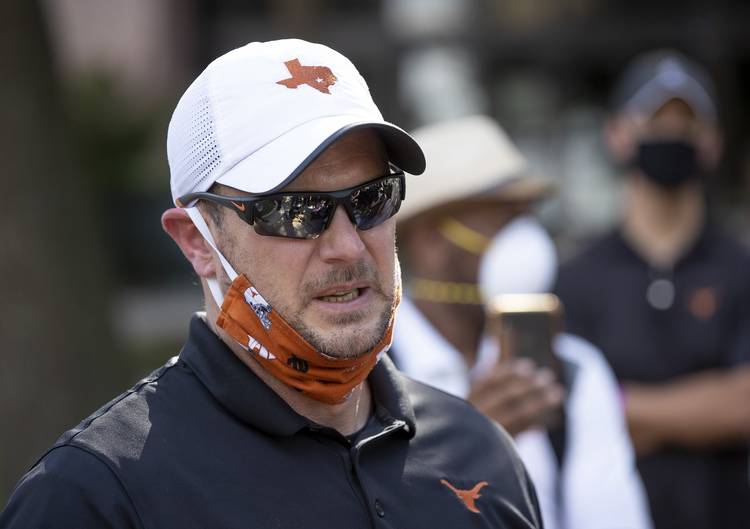 You try being a college football coach these days. One’s ability to juggle chainsaws is every bit as important as blowing a whistle.

Texas’ Tom Herman was at it again Sunday, handling questions about the backup quarterback situation as easily as those about social injustice issues.The Longhorns are now less than two weeks away from their season opener against UTEP on Sept. 12.

There’s a new reality coaches must face. The days of spending every waking moment focused on the upcoming opponent are likely over.

“Really, really pleased with the effort level, intensity today,” Herman said. “I haven’t watched the video yet, but it felt like our most spirited practice thus far.”

Texas didn’t practice Thursday and Friday as players spent time discussing the Jacob Blake shooting in Kenosha, Wis. Cornerback Josh Thompson posted a statement on Twitter that said “many players were filled with emotions and questions on why there is continued oppression against the Black community.”

“We, as players, realized that addressing racial injustice is more significant than playing the sport that we love,” Thompson’s statement read in part. “Racism is embedded in our nation’s culture and we must take action to change this reality.”

Thompson said the Longhorns want to “to work with churches to include social justice in their messages, set up monthly meetings with law enforcement for open dialogue” and discuss with officers on proper rules of engagement. That includes what should happen “when police violate those rules.”

“There are a multitude of ideas that we have drafted, and we must understand that this will be a continuous process,” Thompson tweeted. “We must take a stand to do what is right; this must come to a stop. We must work together to restore peace within our nation.”

Herman has been supportive whenever his players have wanted to speak out. He walked with them to the State Capitol building earlier this summer and listened to their concerns about the racial history involving “The Eyes of Texas” school song.

The Longhorns were one of the first major college football teams to take a public stance on social injustice issues. Now, teams all over the nation, including Baylor and Oklahoma, are engaged in player marches and making public statements.

“They’re human beings that are affected by this,” Herman said. “I would caution anybody that tends to form very strong opinions on things that, quite frankly, don’t affect them the same way that our players or other members of society are affected.

“Our job as a compassionate society is to listen,” he added. “You don’t always have to agree. But I do think it’s our right as members of the same society to at least listen.”

The Longhorns have a team goal of getting everyone registered to vote, the coach said.

Herman said “a lot of these questions are better directed at our players.” Since August preseason camp began, Texas has made only two players available to reporters via Zoom — quarterback Sam Ehlinger and defensive tackle Ta’Quon Graham.

Meanwhile, Herman acknowledged that “I know everybody wants to know about depth chart.”

It’s still unclear how that looks, other than UT is trying to get at least three deep at every position. He did note that Casey Thompson currently is “much more game-ready” than third-stringer Hudson Card at quarterback behind Ehlinger.

On grad transfer Tarik Black, Herman said UT’s new receiver from Michigan “doesn’t say a whole lot.” But Black has shown a willingness to play special teams and is carrying himself like a veteran.

Herman was asked what’s been normal this season. “Next question,” he joked.

“Well, anytime we’re in between the white lines, it feels normal,” he aded. “For those two to three hours a day, four hours when you include meetings, it feels normal. That has kind of been our guys’ sanctuary, for lack of a better term.”

Nothing about this season will be normal. Texas is expected to announce this week that tailgating will either be banned or severely restricted, a source familiar with the decision said. Season ticket holders among the 25,000 or so that will be allowed into the venue have learned their new seat assignments. The athletic department may still have budget cuts, salary reductions, layoffs or furloughs.

The athletes are trying to navigate life away from the football building. That means going to classes, either in person or online, and trying not to contract COVID-19.

This week, Texas will have what Herman called a “mock game week.” The Horns will work Tuesday through Friday and have a simulated game on Saturday with light contact. By then, “the game plan is in, and now it’s about fine tuning, staying and getting ready for the game,” Herman said.

Every day is a new day, though. Be ready to juggle anything.