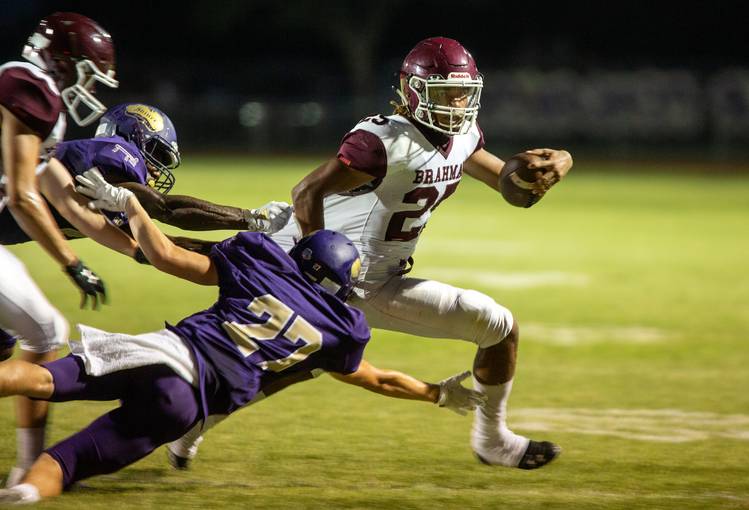 Hallettsville running back Jonathon Brooks was the lone Texas commit to start his season in August when his squad took on Shiner on Friday night. His team lost, but the three-star put up an impressive performance to start the year, rushing for 142 yards and three touchdowns on 16 carries. He also returned a fumble 51 yards for a touchdown and averaged 45.5 yards on his two punts.

“We just had a lot of mistakes,” Brooks told the Victoria Advocate. “If we would have eliminated mistakes, the game would have been different. We played good and they’re a great team. We just have to watch film, learn from our mistakes and come out better next week.”

Brooks was a first-team all-district selection as a sophomore. He was the District 14-3A Division I overall MVP as a junior, helping Hallettsville go 11-3 and reach the state quarterfinals.  He rushed for 1,310 yards and 24 touchdowns on the ground as a junior. He added 233 yards and a touchdown on 13 carries.

“He’s a great young man and an all-around player. I’ve watched him mature and grow into a leader for us,” said Hallettsville head coach Tommy Psencik. “His physicality separates himself from most of his peers at this level. He’s real competitive and hates losing.”

Brooks committed to Texas on May 15.  Psencik was impressed with how his star player handled the recruiting spotlight.

“Getting recruited at that level can get overwhelming and emotionally draining for these young guys, especially when the big schools get involved. I’ve seen that plenty over my 33 years of coaching,” Psencik said. “Texas approached him in a way that made it easy. Stan Drayton did an excellent job of not putting a bunch of pressure on him. Tom Herman made it stress-free.”

Brooks is one of 17 players committed to Texas in the 2021 class. Eleven of the 17 pledges hail from Texas. Brooks and Kennedale safety JD Coffey are the only two that play for a Class 4A program or smaller. The state’s Class 5A and 6A don’t play regular season games until the end of September.

Coffey begins his season this Friday when Kennadale travels to Midlothian Heritage. The four-star safety is ranked seventh in the country at his position. He’s a member of the Fabulous 55 and is a three-time all-district selection. He committed on June 15.

“I’m excited to get the season going,” Coffey said. “It’s been great being back at practice around my teammates and coaches. We feel lucky to have the opportunity.”

Coffey was an Associated Press’ Class 4A all-state selection as a freshman when he recorded 88 tackles and six interceptions. He was all-district as a sophomore, and then his district’s defensive MVP as a junior. He’s tallied 198 tackles and 14 interceptions in his three-year varsity career. Coffey is ranked 170th in the entire class of 2021, according to 247Sports’ composite rankings.

“Texas was one of my dream schools. The new staff showed interest in me and it felt like the right fit,” Coffey said. “My plan is to get to Texas and make an impact right away. My job is to be ready for that challenge. As a senior, I know I need to keep improving. No one is a finished product. There’s always room to improve.”