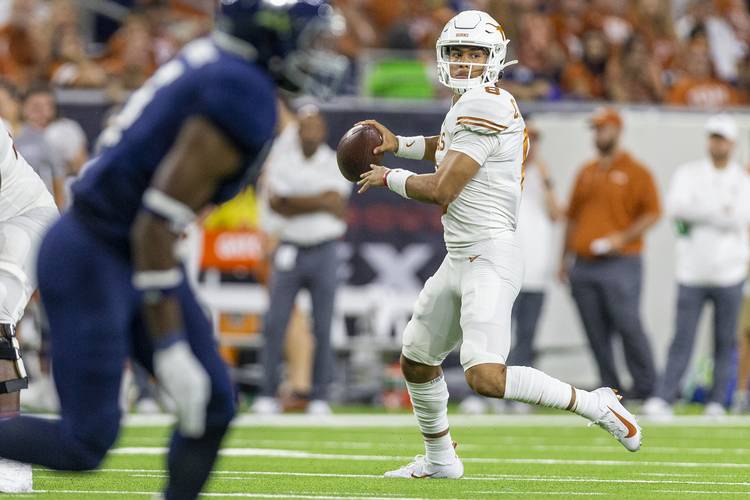 To be clear, Texas has a starting quarterback. Full stop. Period. End of discussion.

Sam is still the man. Sam Ehlinger enters his senior season with 33 starts, 8,870 career passing yards and 68 touchdown tosses. Only Colt McCoy has thrown for more yards and touchdowns at Texas.

In past years, that question hasn’t been hard to answer. There simply weren’t a lot of possible answers. During Tom Herman’s UT coaching debut season in 2017, his only scholarship quarterbacks were Ehlinger and Shane Buechele. The following year, Buechele was clearly favored over freshmen Cameron Rising and Casey Thompson. After Texas moved Roschon Johnson to running back last year, only Thompson and a couple of walk-ons remained.

Now there are four scholarship quarterbacks. Ja’Quinden Jackson is practicing, but the freshman is also eight months removed from a knee injury that ended his spectacular prep career at Duncanville. That leaves Thompson and freshman Hudson Card as the more viable backup candidates.

If the season started today — it actually kicks off with a home game against UTEP on Sept. 12 — Thompson would the second in line. In this scenario, Herman analyzed that experience simply wins out.

“That should be an interesting battle for years to come,” Herman said Sunday of Thompson and Card. “But if we played a game tomorrow, certainly Casey is the most game-ready of the two.”

Thompson, a third-year sophomore, is the son of former Oklahoma quarterback Charles Thompson. The four-star signee redshirted in 2018 and saw some mop-up duty last season, getting 42 snaps while closing out wins over Louisiana Tech, Rice, Texas Tech and Utah. He completed eight of 12 passes and scored on a 2-yard run. Despite the limited game time, he still managed to impress some onlookers.

Ahead of the Alamo Bowl, Herman recalled a practice in which a guest coach nudged him and said “Hey, that backup you’ve got is pretty dang good, isn’t he?”

“He’s really, really talented,” Herman said in December. “When he gets his shot, there’s no doubt in any of our minds that he’s got the skill set to be a championship-level quarterback here.”

Card was among the eight early enrollees this year, but the four-star freshman was unable to do much since spring practices were called off because of the coronavirus pandemic. Still, Herman said the Longhorns are “very excited with Hudson’s potential.”

Ehlinger noted last year that Card comes from “a long line of successful quarterbacks at Lake Travis.” Card is, indeed, the ninth straight starter from Lake Travis’ quarterback factory to sign with an FBS-level school. (Nate Yarnell, a senior and Card’s expected successor at Lake Travis, is committed to Pittsburgh). Two Lake Travis quarterbacks — Baker Mayfield and Garrett Gilbert — are in the NFL.

Card threw 74 touchdowns in his final two years in high school. Primarily used his sophomore year as an all-district receiver, Card was the Cavaliers’ fill-in quarterback in the 2017 Class 6A Division I title game. After Lake Travis lost its starter on the first snap, Card totaled 297 yards of offense in a 35-33 loss to Allen.

Referencing Card’s comeback from a foot injury during his senior year, Lake Travis head coach Hank Carter described his former quarterback as “tough and gritty as nails.” Carter has worked at Lake Travis since 2008, and many of Card’s attributes — arm strength, athleticism and mentality — remind him of the best parts of a Cavs’ quarterback lineage that includes current Baylor starter Charlie Brewer.

“He’s kind of a combination of all of them,” Carter said. “Tremendous athlete. If he had never played quarterback, he would have had the same amount of offers.”

Texas might not need to worry about its backup this season. It didn’t last year as Ehlinger remained healthy over 13 games. But two years ago, Texas woudn’t have reached the Sugar Bowl had it not been able to turn to Buechele following Ehlinger’s injuries in wins over Baylor and Iowa State. And four times in 2017, either an injured Buechele was replaced by Ehlinger or an injured Ehlinger was replaced by Buechele.

Last season, three of the top 10 teams in the Associated Press’ year-end poll did not have a quarterback who started every game. No. 6 Florida, No. 8 Alabama and No. 9 Penn State all needed to start a backup at least once because of the starter’s injury.