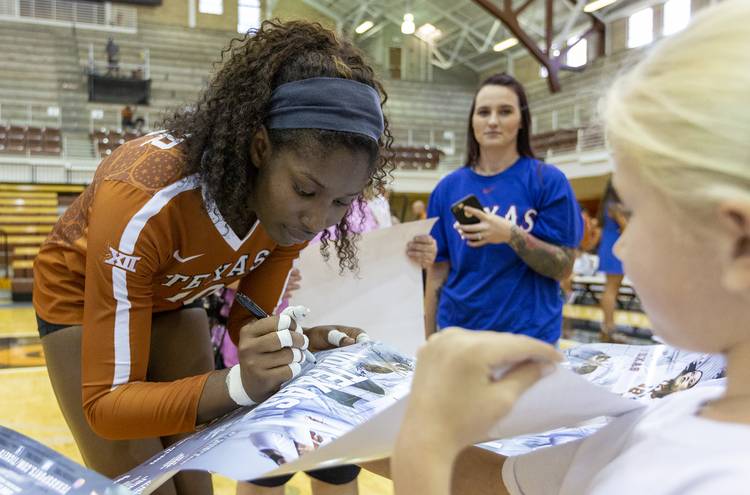 Texas' Brionne Butler signs her name for Claire Everett, 9, after an intrasquad volleyball sctrimmage in 2018. Under proposed rules being considered by the NCAA, Butler and other college athletes could soon be paid for their autographs. [Stephen Spillman/for Statesman]

Texas officials are getting ahead of the unstoppable locomotive involving name, image and likeness rule changes by starting a new program to help athletes monetize and maximize their personal brand.

A new program called Leverage is “designed to equip Longhorn student-athletes with the knowledge and tools necessary to maximize their brand and platform,” the university announced Monday.

“The program is designed to prepare, enhance and play a critical role in our student-athletes developing and growing their personal brands,” UT athletic director Chris Del Conte said in a statement.

In layman’s terms, UT wants to be ahead of the curve when the NCAA adopts new rules in 2021 that allow an athlete to cash in on his or her name value. UT quarterback Sam Ehlinger could theoretically get paid to post something on his Twitter or Instagram feeds, for example. Or, a UT athlete could get paid to do TV commercials, make paid appearances or sign autographs.

Athletes will probably discover what 1099-MISC tax forms are and be required to sign contracts, something that may be totally new to them.

"Texas is a land of opportunity, Austin is a thriving, dynamic and energetic city right in the middle of it, and the University of Texas is like none other."@_delconte is fired up about #LEVERAGE & how it will empower our Longhorn student-athletes. 🤘🚀 pic.twitter.com/Yfl6yd3y2h

By partnering with the school, an athlete can also gain permission to use UT’s name, image and likeness and access to corporate sponsors. If AT&T wanted to have some UT football players do clever commercials for its 5G network, the Horns could appear in those ads wearing burnt orange and say they are Texas football players.

If the athletes wanted to do a commercial with Verizon, a competing phone company, they would probably have to wear non-UT clothing and be unable to acknowledge UT in any way.

What scares most athletic directors is the website Cameo.com. For nominal fees, someone could pay an athlete or entertainer to record a birthday greeting or random message via cellphone. Former Texas lineman Connor Williams charges $249 to record a Cameo video now that he’s with the Dallas Cowboys.

“Whether it’s national award recognition, sharing your personal and team success stories, or establishing a tremendous network of mentors in the community and beyond, the Leverage program will position student-athletes to be presented in the best light by a premier group of folks in the world of creativity, communications and student-athlete development,” Del Conte said in a statement.

The Texas athletic department started a coordinated social media push Monday to tout its new program. Multiple sports tweeted out statements from head coaches touting the program’s effectiveness based on the strength of UT’s platform.

An unmatched experience to create your personal brand at Texas with #LEVERAGE 🚀#HookEm pic.twitter.com/k18AgVjwhA

“With the NIL opportunities coming in the near future,” UT football coach Tom Herman said in a statement, “the establishment of the Leverage program is a personal development area where we will provide unmatched resources when it comes to building our players’ brands.”

Most fans think football players and some basketball players will get the most opportunities. But smaller sports could also be more successful than anyone thinks. One of the most popular athletes on the internet in recent years was UCLA gymnast Katelyn Ohashi.

“Now, with Leverage, we are taking the next step in supporting our student-athletes and preparing them for success outside of athletics,” UT track coach Edrick Floréal said. “There is no better place for a student-athlete to build themselves, both on and off the track, than at UT.”

Texas doesn’t have a quarterback controversy in 2020, but what is the Longhorns’ backup plan?