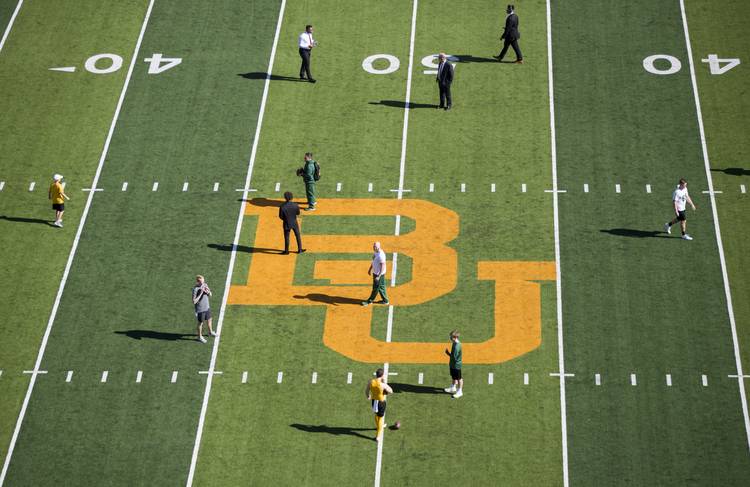 Baylor Bears player warm up before an NCAA football game against Texas Longhorns in Waco, Texas on Saturday, November 23, 2019. [RICARDO B. BRAZZIELL / AMERICAN-STATESMAN]

In our annual Triplets of the Big 12 series, we look at every conference school’s expected leaders at quarterback, running back and receiver.

Last year, the Bears — only two years removed from going 1-11 in 2017 — rode a tough defense to an 11-3 season that saw Baylor nearly beat Oklahoma during the regular season and then fall again to the Sooners in the Big 12 title game. The Bears, who were picked to finish sixth in the conference during preseason, won their first nine games before letting a 25-point lead slip away against OU in Waco, a 34-31 loss. Four Bears went in the NFL draft, though only one of those was an offensive player.

FYI: 6-0, 200-pound senior from Hays, Kansas by way of Kansas State; started six games in his Wildcats career, all Big 12 matchups (TCU, Oklahoma, Kansas and Texas Tech in 2017, and then Texas and Kansas last year). Kansas State went 3-3 in those games. He was a team co-captain last year.

Brewer, out of Lake Travis, helped elevate the Bears last season by leading them to 11 wins and a Sugar Bowl appearance, a major leap from their one-win season two years prior. He’s never been one to holster his deep ball; he completed at least one 40-yard pass in eight different games last year, including four of them in a double-digit win at Oklahoma State.

The biggest question is about Brewer’s health. Former Bears coach Matt Rhule previously said Brewer suffered three concussions in his career, including last year’s Big 12 championship game, in which he was removed.

Baylor’s calling card in 2019 was its fortified defense, which managed to check the majority of its Big 12 counterparts. But only two starters are back from that defense. Combine that with a new coaching staff and Brewer’s arm appears vital to the Bears remaining near the top of the conference.

Despite the fact that he’s led Baylor in rushing each of the last three years, Lovett has yet to command the position.

A year ago Lovett split carries with JaMycal Hasty. He’ll likely do the same this fall alongside fellow senior Trestan Ebner, but both backs should benefit from having four starters returning on the offensive line. Lovett’s average of 6.4 yards per carry matched the likes of Oklahoma’s Kennedy Brooks (6.5 ypc) and Oklahoma State’s Chuba Hubbard (6.4), although with a notably smaller sample size.

Expect new offensive coordinator Larry Fedora to utilize his senior quarterback as much as possible. But allowing Lovett and Ebner to cut into Brewer’s carries could quickly alleviate some health concerns surrounding Baylor’s man under center.

FYI: An honorable mention all-conference selection in 2019, the 6-3, 180-pound junior from Miami picked Baylor over a handful of SEC programs in 2018.

Former Bears wideout Denzel Mims was among a record 13 receivers taken in the first two rounds of April’s NFL draft. As Mims prepares to line up for the New York Jets this season, in steps Thornton for the Bears.

If the junior continues at the pace he’s shown the last two seasons, he may be in Mims’ position soon.

Thornton improved on an solid freshman season that hinted he could become the Bears’ next breakout target. His speed and elusiveness in space make him an immediate threat for any Big 12 defense this fall. His average of 17.4 yards per catch last season ranked 24th nationally in the country among wideouts with at least 700 yards — all while competing with Mims for targets.

The Dotted Line: Our annual Big 12 of the Big 12, the conference’s best dozen players

Breaking down the Texas roster: A closer look at Longhorns players, position groups for 2020