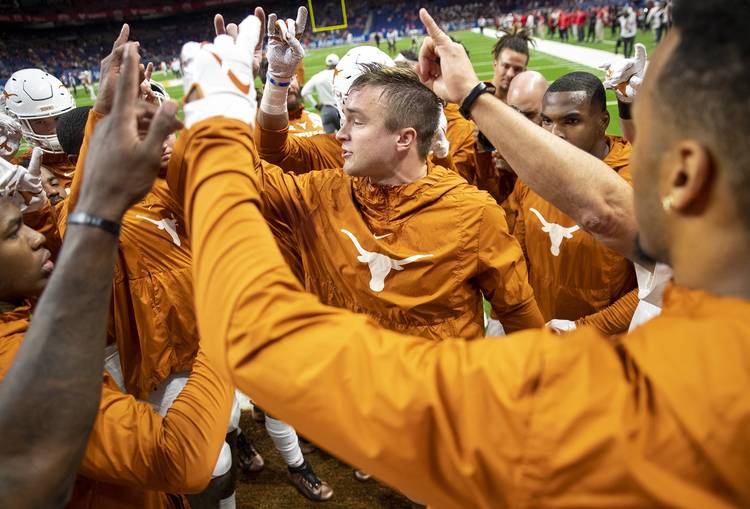 Texas Longhorns quarterback Sam Ehlinger (11) pumps up his team during pre-geme as they prepare for Utah Utes during an NCAA college football game at the Valero Alamo Bowl at the Alamodome on Tuesday, December 31, 2019 in San Antonio, Texas. [RICARDO B. BRAZZIELL/AMERICAN-STATESMAN]

While Texas fans may not know who’s going to break out this season, they do at least have an idea who’s on the team, courtesy of the online rosters. Here’s our look at the Longhorns’ roster with thoughts on players and what fans can expect from them this season.

This room has a solid three-year starter and a slew of talented backups. Coach Tom Herman has focused on building up the depth, and it shows. All will be working with new offensive coordinator Mike Yurcich, who has a solid track record of productive offensive units.

If this group can stay healthy all season, the top three should all be productive contributors. Keaontay Ingram battled through some injuries last year, and Roschon Johnson was the quarterback-turned-running back. Bijan Robinson is the all-world, five-star recruit from Tucson, Ariz.

Bijan Robinson, Fr., 6-0, 222: Herman will only play top freshmen if the protect the ball.

For all the fans worried about replacing Devin Duvernay, consider that nobody was really talking about him last August. He switched positions and then had a breakout season. This year’s group needs someone to do the same. Who here has that Lil’Jordan Humphrey or Duvernay breakout potential?

One of the most important positions in Herman’s offense and possibly one of the most misunderstood. The tight ends played a huge role in 2017 and 2018, Herman’s first two seasons. But injuries neutered this group last year. For quarterbacks, nothing beats a solid over-the-middle security blanket.

Offensive line coach Herb Hand’s biggest offseason obstacle was to figure out why his unit struggled at times in 2019. Texas allowed 36 sacks, the second most in the Big 12. He’s got a potential first-round draft pick in left tackle Sam Cosmi, but it’s unclear how the right side will hold up.

Interior line play will be a key to the Longhorns’ running game. Backs like Keaontay Ingram, Roschon Johnson and Bijan Robinson can burst through holes, but those holes have to be there. There’s experience at guard, just not great depth. Some Longhorns linemen have been cross-training at tackle and guard.

Zach Shackelford was easy to take for granted, having commanded the starting center spot since his freshman year. But he has moved on and versatile lineman Derek Kerstetter, who can play guard, tackle or center, should provide that same veteran leadership up front that Shackelford did.

Rafiti Ghirmai, So., 6-5, 291: Has logged extensive time training as the backup center.

This group — the whole defensive line, really — will be front and center this season. The defensive line couldn’t get much consistent pressure on quarterbacks last year.

This is a new position to Texas fans, but essentially it’s a hybrid linebacker and defensive end spot that allows athletic players to rush off the edge. Joseph Ossai showed what he could do in the Alamo Bowl, and the hope is Byron Vaughns can do the same.

Herman has changed the defensive alignment, went back to a four-man front, hired another assistant to help Oscar Giles and will press forward under new defensive coordinator Chris Ash.

Herman has not held back his concerns about the depth and play-making abilities of this group overall. Ossai has moved to the hybrid Jack position. But in the pass-happy Big 12, nobody gets a break in the open field.

DeMarvion Overshown and Juwan Mitchell are known quantities, but who else is going to become a consistent contributor?

There’s a slew of talented options at cornerback, which the Longhorns have concentrated on heavily in Herman’s first few years of recruiting. His 2018 class alone yielded several top DBs that now highlight the secondary’s depth chart.

This group was the driving force behind all the Longhorns’ social justice push this summer. It’s a group with some terrific thinkers. Now, they need to play just as hard. Safety Caden Sterns will be expected to patrol the secondary.

B.J. Foster — one of those highly-regarded 2018 recruits — is the heavy-hitting machine.

Nothing like having steady performers on special teams. Cameron Dicker, the kicker, can probably still get a free lunch for his game-winning field goal against Oklahoma in 2018. He added a 57-yarder last season. Australian-born Ryan Bujcevski has long since broken out of cousin Michael Dickson’s shadow.

Triplets of the Big 12: Baylor’s Brewer is back, but does his offensive support cast have what it takes?