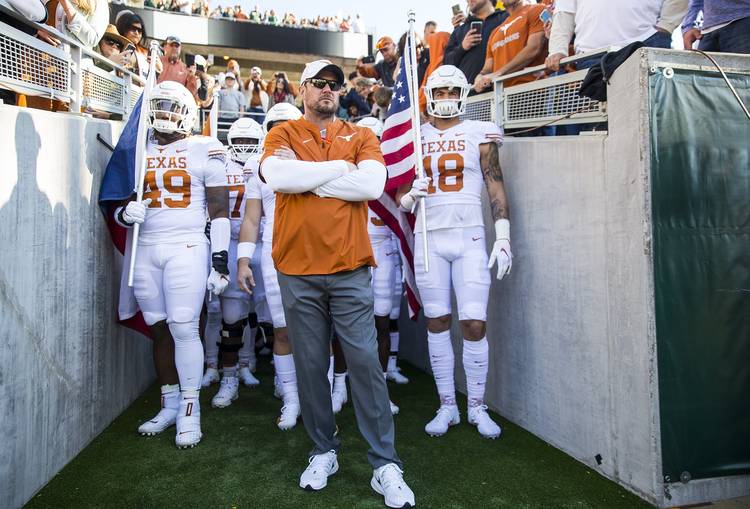 After months of frustration, mask wearing, hand washing and social distancing, Texas coach Tom Herman looked relieved Monday to tell reporters, “It’s really exciting to be sitting in front of you today knowing that our first game is five days away.”

No. 14 Texas opens its season as a 43-point favorite over UTEP on Saturday night at Royal-Memorial Stadium. The Longhorns are 5-0 in the all-time series and have won every game by an average of 32.8 points. There’s little to indicate this one will go much different. The Miners are 2-34 the last three seasons combined.

But just getting through this game week represents a significant hurdle for Herman, his players and everyone associated with the UT and UTEP football programs. The first week is big for anyone playing this season, frankly. It’s a critical mental hurdle, if nothing else.

“I’m sure everybody in the country that has an opportunity to play this week is just as excited as our guys,” Herman said, “but I couldn’t be prouder of the steps that they have taken to get us to this point.

“Questions,” the coach opened things up, like he does after every opening statement. Herman was at his regular Monday noon-time post in the Centennial Room on the ninth floor of Bellmont Hall. Reporters were at home watching via Zoom.

It’s still unclear if playing football is completely safe, at least from the coronavirus. No medical professional will attest that every single person on the field Saturday is 100% COVID-free. However, schools are going to extreme lengths to be as sure as possible.

Herman confirmed his players will be tested for COVID-19 three times per week on “Friday morning as well as Sunday and Wednesday leading up to (each game).” Any player that tests negative goes into self-isolation.

UTEP is expected to follow similar protocols this week as a condition for keeping this game on the schedule. The Miners are scheduled to earn $1.4 million to come to Austin, according to the game contract.

Coaches and staff will wear masks on the sideline, which is being expanded to the 15-yard lines. “Our inner bubble, if you will, will all have been tested on Friday,” Herman said. “That includes trainers, managers, coaches, everybody that comes in contact with our players.

“Then, my understanding is throughout the course of a game, it’s a normal game.”

This will not be perfect. TCU and SMU have postponed their nonconference game because of an outbreak within the Horned Frogs. On Monday’s Big 12 coaches teleconference, TCU coach Gary Patterson said he’s hoping to get the game rescheduled soon.

But Herman was clear on one major point. “Our team isn’t quarantined right now,” Herman said. “You know, this isn’t the NBA where we’ve got a bubble.”

The NBA bubble in Orlando, Fla., has allowed pro basketball to finish out its season. The playoffs are well underway. The NHL created two bubbles in Edmonton and Toronto in Canada, and now that league is close to the Stanley Cup Finals. College athletic departments don’t have the luxury of keeping more than 100 football players quarantined.

Herman appeared to support the Big 12’s new policy mandating that each team have 53 healthy players each week. It’s something akin to an NFL active game day roster. Each team must have seven offensive linemen, four interior defensive linemen and one quarterback.

“Teams falling below any of these benchmarks, based on game week test results, could still elect to play as scheduled if so desired,” the Big 12 announced. Otherwise, the game could be ruled a no-contest.

Wanting to still play without certain players and being forced to play are two separate issues.

On the Big 12 coaches teleconference, Herman was asked if he would feel comfortable still playing even if certain players weren’t healthy. Essentially, how comfortable would he be relying on backups and third-stringers?

“Yeah, there’s no doubt that scenario I’m sure has gone through all of our coaches’ minds in our conference at one point or another,” Herman said. “But you can’t control it. It’s what we agreed upon as a conference.”

So the Longhorns press forward. Herman said he obviously feels comfortable with senior quarterback Sam Ehlinger and how right guard Denzel Okafor and right tackle Christian Jones are coming along. The depth on the interior defensive line “is going to be a tremendous asset for us,” Herman said.

Replacing the production loss from now-departed seniors Colin Johnson and Devin Duvernay is and continues to be one of his key concerns. And “the depth and consistency at linebacker” has been a hot offseason topic, but Herman feels better about that.

“The thing I’m worried about is making (it) through the dang season,” he said. “We’ve got to be able to sustain this level of diligence the entire season. For a group of 18- to 22-year-olds is going to be difficult but certainly not impossible.”

After having spring practice canceled, Herman said his players “would play in a parking lot if we have to.” The fact that there will be somewhere around 25,000 people in the stands is “not really a huge concern of ours.”

Herman said players will wear a special team patch signifying social issues, and all Big 12 teams will have a similar helmet sticker. But the coach did not indicate what will happen during the post-game singing of “The Eyes of Texas” school song.

The Longhorn Band will not be performing because of the pandemic, but fans usually still sing the song acappella at sporting events without the band, anyway. UT’s baseball teams have long stood at the top of the dugout to sing The Eyes after road games. “We’ve got time to talk about it, when and if I do get some kind of clarity on what is going to happen post-game,” Herman said.

The Dotted Line: Predicting the destinations of the Fabulous 55’s top uncommitted prospects

The Dotted Line: Texas faces a pair of recruiting questions as Horns round out their class