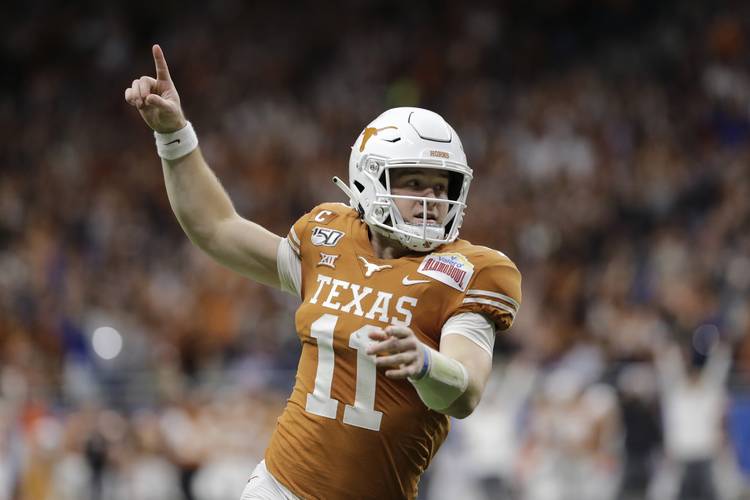 Texas quarterback Sam Ehlinger celebrates a touchdown against Utah during the first half of the Alamo Bowl NCAA college football game in San Antonio, Tuesday, Dec. 31, 2019. Ehlinger enters his fourth season as a starter and his 8,870 yards and 68 touchdowns both rank second in program career passing records. (AP Photo/Austin Gay)

Sam Ehlinger enters his senior season with 20 career victories as Texas’ starting quarterback, the same as James Street had from 1967-69. Look at some of these names he can pass this season.

Ehlinger needs three victories to pass Major Applewhite, the darling of the Mack Brown era. He needs six to move ahead of James Brown, a three-time conference champion, and Peter Gardere, the Oklahoma slayer.

Seven victories this season would Ehlinger a notch ahead of Chris Simms and Marty Akins. A ninth would put him ahead of Bobby Layne’s 28 UT victories, for heaven’s sake. There are only two quarterbacks left — Colt McCoy (45 wins) and Vince Young (30) — both widely considered the best two in school history.

They describe a guy they’re willing to fight for. They describe a true leader. That alone may be the best reason why No. 14 Texas has a fighting chance to grab its first conference title since 2009.

“Being a starting quarterback for the University of Texas comes (with) a lot of pressure and a lot of eyes on you,” left tackle Samuel Cosmi said. “I think he’s done a phenomenal job with the pressure and what comes with it.”

Does it eat at Ehlinger how UT hasn’t won the Big 12? “It eats us all,” Cosmi said. “I wouldn’t say it’s just him. It’s literally everyone in the program. We are hungry and motivated to win a championship.”

Oddsmakers and the national press continue to gloss over Ehlinger and the Longhorns, and perhaps rightfully so until they finally break though. Ehlinger has 20-1 odds of winning the Heisman this season, according to the William Hill Sportsbook. Clemson’s Trevor Lawrence is the betting favorite at 4-1.

Ehlinger would prefer to eschew Heisman talk, or talking about anything other than going 1-0 each week, just like his coach Tom Herman. But he’s open and more comfortable now talking about football in its proper context.

“Obviously this football season is a lot different than previous ones that I’ve been here,” Ehlinger said Tuesday. “I hope that this year can bring back a sense of normalcy to America, show people that you know we’re still a very strong country.

“I know it’s been very hard with everything going on, being at home, not being able to return to normal life,” he added. “But I also I also hope that college football and our team can show America what happens when people from different backgrounds come together for one goal and shows people we’re no different. As a team, with love and everything that a team has, you can accomplish really cool things.”

Nobody wakes up instantly comfortable in the spotlight that is UT football. Ehlinger sure didn’t. He’s grown accustomed to the glare over time, like anyone would while matriculating through higher education. But Ehlinger has also maintained his own sense of self, too, like sitting for interviews to talk about his religious beliefs. That topic is virtually impossible to broach during a 15-minute scrum each week with UT media.

Talking alone doesn’t win over anybody in the locker room. And you don’t earn teammates’ trust on the field. It happens long before.

The time for leadership was this spring when the coronavirus shut down spring practice. Ehlinger had groups of six to eight players over to his family home so they could keep working out on their own. His mother, Jena, kept players fed as everyone understood personal responsibility.

The time for leadership was in late May and June. When a group of Longhorns marched to the Capitol this summer, Ehlinger was there, arm in arm, in support. Safety Caden Sterns said he and the quarterback had “uncomfortable conversations” about racial issues.

Make no mistake, there are Republicans in any locker room along with Democrats. What binds them is the uniform and sense of purpose. With no leadership from the most visible player at the most vital position, it all falls apart.

“The biggest thing for me with everything going on has been just listen,” Ehlinger said. “The best leaders listen, and so I’ve been trying to do that and understanding. I know that I cannot feel every emotion that every single guy on the team can feel. But I can listen, and I can say your opinion absolutely matters and I hear and have your back on whatever that may be.”

Ehlinger is clear in his belief that “the team should always come before individuals.” That’s clear this week as UT finalizes plans on wearing a patch on their uniforms about social injustice. It’s still unclear how players will react during the post-game playing of “The Eyes of Texas” school song after a tumultuous summer about its origins.

“He’s made sure he stood up and had tough conversations, made sure he’s listening, not just trying to push it past and making sure what we’re doing is just a trend,” Ossai said.

It’s funny, Herman isn’t really asked about Ehlinger much these days. Maybe reporters take the quarterback for granted; maybe they know what Herman will say. The coach was asked Monday about what he feels good about heading into the season. “Feel great about our starting quarterback,” he answered. Then veteran offensive line, depth along the defensive line, etc. That was it.

That’s what happens when you become cemented at your position and literally everyone, from teammates, coaches and outside observers, can count on your stability. That’s leadership.

Ehlinger’s a rock. And once he completes his final class this summer, he will be something even more: A Texas graduate. “Business law and ethics. Love it,” he said.

Texas’ Samuel Cosmi on not opting out of the 2020 season: ‘I’m here to play football’

The Dotted Line: Five Texas commits that I’m ready to watch in person this season