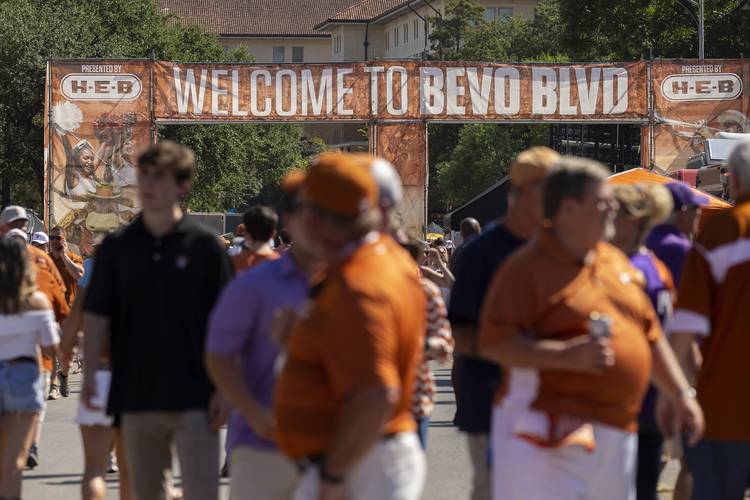 Fans fill the University of Texas’ Bevo Boulevard area outside Royal-Memorial Stadium before the Longhorns’ game against LSU on on Sept. 7, 2019. Due to the coronavirus outbreak, there will be limited seating capacity at the stadium for the season’s first game this weekend, along with no Bevo Boulevard and no on-campus tailgating. The result will be fewer fans in town -- which will translate to fewer dollars for Austin businesses. [Stephen Spillman/ for Statesman/File]

It generally hasn’t mattered what the scoreboard says after University of Texas home football games — local hotels, restaurants and retailers catering to the huge Longhorns fan base have come out winners.

That’s because about 80,000 visitors typically converge on Austin for each home game, according to a 2015 study, with many helping to pack UT’s 100,000-seat stadium but others here simply to meet up with old friends and cheer the team on from sports bars, restaurants and tailgate parties.

Either way, their spending has combined with that of Austin-area fans to generate about $63 million for the local economy every home-game weekend — a figure now closer to $70 million when adjusted for inflation over the past five years.

But, like everything else in the coronavirus era, this season will be different.

“We are going to see a significant dip” in terms of financial benefits related to home games, said Matt Patton, an economist with Austin-based Angelou Economics, which conducted the 2015 economic-impact analysis for UT’s athletics department.

“It will be better than zero, but it will be felt for sure,” Patton said.

When the Longhorns square off against UTEP at Royal-Memorial Stadium on Saturday, seating will be limited to 25% capacity, or only about 25,000 people. The cap is a precautionary measure to help prevent spread of the deadly virus, but it also has constricted the pipeline of free-spending fans potentially coming in for the game.

In addition, public tailgating on campus — another big draw for fans — has been prohibited, while many area restaurants and gathering spots have ratcheted back their own traditional game-day festivities because of capacity restrictions and coronavirus fears. Local hotels, meanwhile, are expected to be hard-pressed to charge what typically are premium game-day rates to out-of-towners who have made the trip, since they’ve been struggling merely to fill rooms amid the pandemic.

Still, the fact that the game is taking place at all constitutes something of a ray of sunshine for a downtown hospitality district that has been hammered by the pandemic.

High-profile events nationwide have been canceled because of the coronavirus outbreak, and many of Austin’s celebrated tourism draws have likewise been scrapped. Among them, the city’s internationally prominent South by Southwest festival didn’t take place this year, while the Austin City Limits Music Festival and the Formula One U.S. Grand Prix, both of which were scheduled for October, have been called off.

But UT football has become an exception, because the Longhorns play in the Big 12, which is among the college conferences that haven’t canceled their seasons. The Big Ten and the Pac-12 aren’t playing this fall.

“We assumed a few months ago that we may not even have any UT football games” this year, said Tom Noonan, CEO of Visit Austin, a city-supported nonprofit that markets Austin globally as a leisure and business destination.

“So we take the idea that we are getting this game this weekend as a gift — that we are going to get some (economic) lift out of it” despite the likelihood of it being limited, Noonan said.

In recent years, he said, Austin-area hotels have been able to charge premiums ranging from 10% to nearly 70%, depending on UT’s opponent, above the standard room rates on game-day weekends.

He said he doesn’t expect UT’s games to be significant “rate drivers” this season, however, because most local hotels remain well below pre-pandemic occupancy levels and because the cap on the number of fans allowed into UT’s stadium is likely to crimp game-related demand for rooms.

But “it’s going to be better than not having a game, that is for sure,” Noonan said. “We hopefully will see some lift from it” in terms of higher hotel occupancy.

Scholz Garten, a restaurant and bar with a large outdoor seating area less than 1 mile from the stadium, has typically served thousands of fans and revelers on average game days, according to co-owner Dan Smith, closing off a portion of 17th Street to accommodate spillover crowds streaming through during the course of the festive events.

But Smith said the number of Scholz customers is likely to total just a couple of hundred Saturday, as the restaurant adheres to social-distancing requirements and other measures to help safeguard its patrons and employees.

“We usually call it the ‘TailGarten,’ ” he said. “This year we are calling it ‘SafeGarten.’ ”

Among other precautions, Scholz is requiring table reservations, he said, and it’s mandating that customers wear masks when not seated and generally avoid standing around in groups.

Some other game-day gatherings have been canceled outright.

At least for Saturday’s home game, UT alumni association the Texas Exes has scrapped its tailgating event that normally draws 5,000 to 10,000 members and guests to the alumni center, which is just across San Jacinto Boulevard from the stadium.

Chuck Harris, executive director of the Texas Exes, said the alumni association will revisit the decision before the Longhorns play at home again Oct. 3.

“We are going to monitor (Saturday’s game and crowds), and we may consider opening for future games under kind of a reservation-only format” for tables, Harris said. “Obviously, you are talking hundreds of people (in attendance), not thousands, if we do that.”

The Texas Exes, a nonprofit, earns a significant amount on concessions from the tailgate events over the course of a season to help fund its operations, he said, so not having any of them would be felt.

Patton, of Angelou Economics, said quantifying the precise financial blow to the Austin area overall is difficult at this point, partly because it’s unclear how many UT fans might have come to town despite the limits on stadium seating.

But he said he expects the economic impact of game day to be down significantly from previous years, delivering another whack to a local leisure and hospitality sector already reeling from the pandemic.

Cumulatively, the hit from lost event-related commerce that the Austin area stands to absorb this year is upwards of $1 billion, Patton said, counting the lineup of major events that have been called off — such as SXSW, the F1 race and ACL Fest — as well as the anticipated reduction in UT football game-day festivities and visiting fans this season.

Even for Austin’s diversified, $150 billion regional economy, “you lose $1 billion, you feel that,” he said. “I think it would be severely myopic to say that’s not a big deal.”

UTEP RBs coach Barrick Nealy: Tom Herman motivated me at ‘a rough point in my life’

‘We kind of helped each other’: UTEP’s Barrick Nealy recalls special past, bond with Texas’ Tom Herman