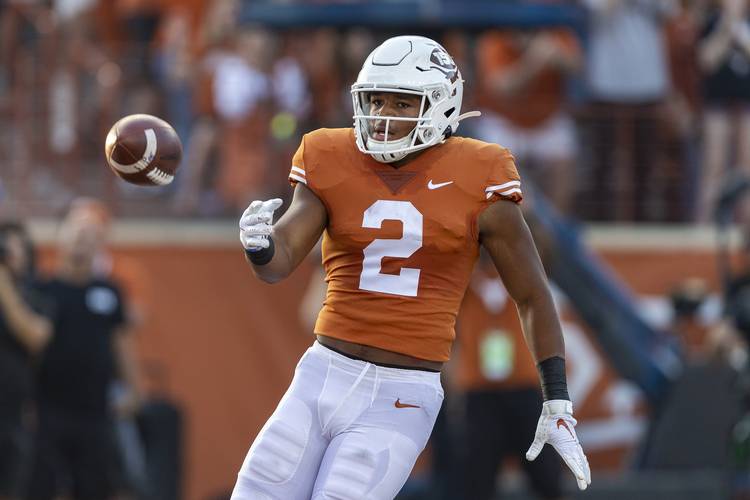 Texas running back Roschon Johnson (2) scores a touchdown against Kansas at Royal-Memorial Stadium on Oct., 19, 2019. [Stephen Spillman for Statesman]

This week’s notable number is 23 — the jersey number that is assigned to freshman defensive back Jahdae Barron. This is the 23rd year of Tom Herman’s coaching career. In terms of rushing yards, there have been 23 1,000-yard seasons in UT’s history.

Twenty-three also represents the most carries that a running back has recorded in a game during the Herman era.

In a rout of Texas Tech last November, Roschon Johnson rushed 23 times for 105 yards and three touchdowns. That marked only the fourth time that a running back has gotten at least 20 carries since Herman’s hire ahead of the 2017 season. Johnson also has a 21-carry performance, and both Keaontay Ingram and Daniel Young have rushed 21 times in a game.

We are not that far removed from a 2016 campaign in which D’Onta Foreman won Texas’ fourth Doak Walker Award. That fall, Foreman had 10 20-carry games. He exceeded 30 carries on six different occasions. Foreman also set a school standard when his number was called 51 times in an overtime loss at Kansas.

Foreman’s 51 carries against Kansas are an extreme outlier. (The 16-year-old UT record that Foreman broke was 45 carries). But will Texas fans ever get to root for a workhorse running back while Herman is in charge?

Earlier this week, Texas offensive coordinator Mike Yurcich was asked about the management of his running backs. Yurcich said all three running backs on the depth chart — Ingram, Johnson and freshman Bijan Robinson — will be utilized. For health reasons alone, that approach is necessary. Yurcich asserted, however, that he wouldn’t shy away from keeping a player on the field if the situation was warranted.

“There’s no doubt that this is a talented backfield and it’s going to be a backfield by committee,” Yurcich said. “When one young man emerges, like the hot hand as you say, we have to be smart and we have to continue to utilize our personnel strengths. It’d be silly not to. The best players play.”

Yurcich added: “To pigeonhole yourself right now and to say that we’re going to do exactly this or exactly that probably isn’t the best thing to do. I think it’s smart to get all three guys ready and to share as many reps as we possibly can. When we see one guy emerge and it becomes blatantly clear, I think you’ll see it start to tilt in that direction.”

In their careers, neither Yurcich nor Herman has been adverse to the concept or a workhorse back. Last year, Yurcich worked for an Ohio State team that had J.K. Dobbins record over 30 carries in three straight games. When Herman coordinated Ohio State’s offense in 2014, he gave Ezekiel Elliott 36 carries in the national championship game.

At Texas, there will be plenty of mouths to feed in 2020. Ingram led the team in rushing last year. Johnson, a converted quarterback, averaged 5.3 yards per carry as a freshman. Robinson was the top-ranked running back in the 2020 recruiting cycle. Gabriel Watson, who led Division II football players with his 26 touchdown runs in 2018, also recently joined the Longhorns as a graduate transfer.

Senior quarterback Sam Ehlinger, who himself has 441 career rushing attempts, was effusive in his praise for the UT backfield on Tuesday. Ehlinger described Ingram as “an incredible athlete. He’s a one-cut, make-you-miss type guy.” Of Johnson, Ehlinger said that “he’s never down. His legs are always moving. He runs with a great mentality, and I think it really sparks our offense.” Robinson, Ehlinger said, “if he gets in the open field, watch out. Even if he’s not in the open field, he’s like a pinball bouncing around.”

“I’m really excited for all three of those guys,” Ehlinger said.

Texas opens its season on Saturday with a home game against UTEP. Last year, UTEP allowed 201.3 rushing yards per game and ranked 108th nationally. Texas last had at least three players rush for 100 yards in the same game in 1969. That feat has happened only three times in the program’s history.

‘Time to get it on’: No. 14 Texas begins what is hopefully a full, legitimate season against UTEP