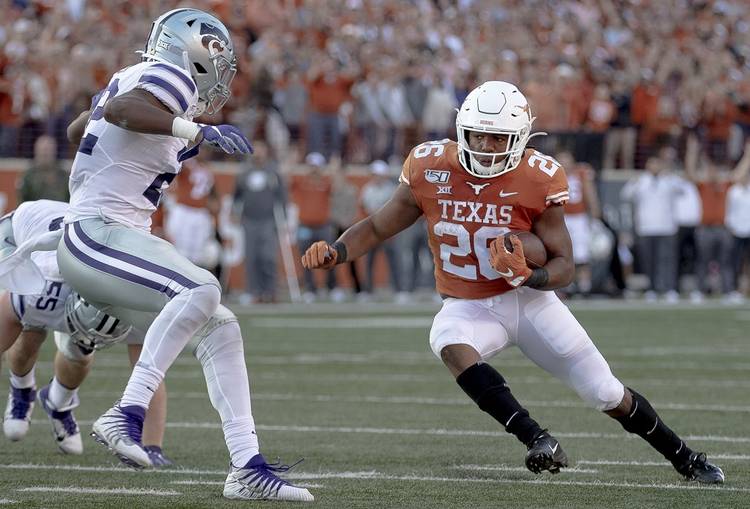 Texas running back Keaontay Ingram (26) runs for a touchdown against Kansas State on Nov. 9, 2019 in Austin. [NICK WAGNER/AMERICAN-STATESMAN]

Five questions facing No. 14 Texas on Saturday night against UTEP:

1. How much rust will Texas shake off?

There will be a 255-day gap between kickoff Saturday night and Casey Thompson’s 6-yard run that closed out the Alamo Bowl win over Utah. Add in the fact that Texas lost its spring practices and spring game, it’s been a while since there have been any meaningful snaps. Will the Longhorns look rusty against UTEP, which opened its season last week by starting slow but coming back to beat Stephen F. Austin. Or will Texas simply pick up where it left off against Utah? Texas has scored on its first drive of the season in two of the past four years. Only once during that span did the defense post an opening first-quarter shutout.

2. Who will lead Texas in rushing?

Running backs coach Stan Drayton enters this season with perhaps his most talented backfield at Texas, but how does the fourth-year assistant divvy up the touches? Keaontay Ingram, a junior, led the team in rushing last year and is on the Doak Walker Award’s watch list. Texas got two 100-yard games from Roschon Johnson after the ex-quarterback switched positions as a freshman. And Bijan Robinson was the top-ranked running back in the country for the 2020 recruiting cycle. Last year, UTEP ranked 108th out of 130 FBS-level teams against the run.

3. Who will be Sam Ehlinger’s top target?

Last year, Devin Duvernay either led or was tied for the team lead in receptions in all 13 games. He was the leader in receiving yards in 10 of those. Duvernay, though, will be facing the Cleveland Browns this weekend, not the UTEP Miners. Collin Johnson, UT’s No. 2 receiver in 2019, is also now in the NFL. Duvernay’s 106 catches last year were the second-most in school history, but he had 70 receptions over his first three years. Will someone else blow up in 2020?

4. Does Texas limit the big plays?

Texas allowed nine plays that covered at least 50 yards last season. According to cfbstats.com, there were only 30 schools that allowed more. In the Big 12, only Texas Tech did. Big plays probably won’t be the difference between winning and losing on Saturday, but they could factor into whether UT gets a shutout. Four years ago, Texas yielded only a 51-yard touchdown run by UTEP’s Aaron Jones in its 41-7 win.

No tailgating. No band. Fans in masks, and distanced. A capacity capped at 25%. Due to the coronavirus pandemic, this will not be a normal-looking season opener at Royal-Memorial Stadium. How will the look in the stands impact the product on the field? On Monday, Texas coach Tom Herman downplayed the notion of a socially-distanced crowd impacting his team’s energy.  “I don’t think that’s going to be as big a deal. We get pretty cranked up just for scrimmages around here,” Herman said.

‘We kind of helped each other’: UTEP’s Barrick Nealy recalls special past, bond with Texas’ Tom Herman

‘Time to get it on’: No. 14 Texas begins what is hopefully a full, legitimate season against UTEP