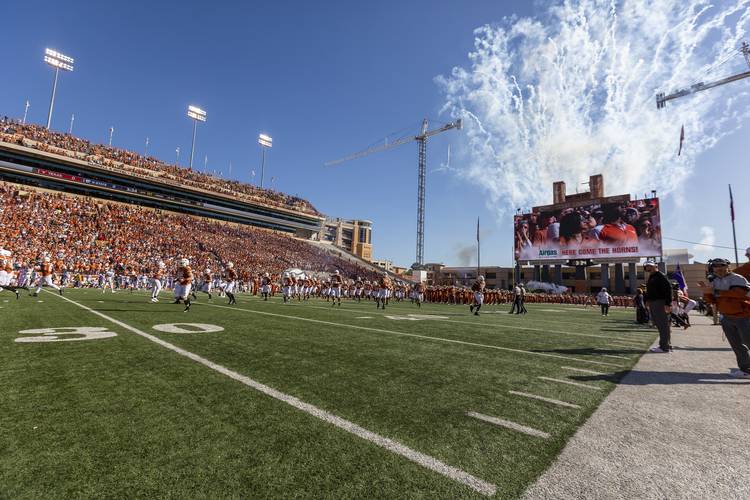 It’s hard to properly summarize how many twists, turns, sinkholes and speed traps were navigated for college football to arrive at Saturday’s season opener.

The Big Ten and Pac-12 sideswiped the guardrails on the open highway, and the COVID-19 pandemic still clipped a few more once they crossed the city limits. TCU and Baylor have both had to postpone their openers because of that dang blasted coronavirus.

No. 14 Texas expects to start its 10-game journey with a Saturday night soirée against UTEP. Just don’t bank on anything until toe hits leather at Royal-Memorial Stadium.

“I still have my fingers crossed that we get to Saturday,” UT quarterback Sam Ehlinger said on Tuesday. “I know how quickly things can pop up.”

Most of the Longhorns probably feel like left tackle Samuel Cosmi. “It’s time to go,” he said, “time to get it on.” Anywhere from 18,000-20,000 people will be in attendance, properly spaced out, of course, masks on.

If college football can get through conference play, reach the College Football Playoff and crown a national champion, it’ll be a successful marriage of modern medicine and unusual restraint shown by thousands of athletes nationwide. Then again, the choice is rather simple. Do you want to hit those parties on Thursday nights or play football on Saturdays?

And if we do reach the end, how legitimate will this year’s CFP champion be? If every Big 12 opponent plays all 10 games, the league’s championship game winner has nothing to be ashamed of. That team will be every bit deserving of playing in the CFP, it stands to reason.

“We want a legitimate season,” Texas coach Tom Herman said. “But we also understand as coaches that those decisions are made by people that aren’t coaches.”

It’s quite possible we may all look back and realize that Big 12 presidents were the ones that kept college sports afloat. They were the ones who opted to play when the Big Ten and Pac-12 canceled fall sports. The ACC and SEC desperately needed the Big 12 to stay in the game, so to speak.

If only two of the Power Five leagues had played, the CFP would’ve been viewed as toothless. At least with three active leagues, majority rules.

“There’s kind of two ways to look at it, right?” Herman said. “One way is we’re going to get 10 games in come hell or high water, and if you got to play nine walk-ons on either side of the ball, then so be it. As long as you get 53 able bodies, you guys are going to play, and I get that.

“But I think it’s important that if we want to put our best foot forward in the postseason,” he added, “the other two Power Five conferences are aligned in that philosophy as well.”

Ohio State, which was a heavy favorite to make the CFP this year, isn’t playing. Neither is Penn State, another strong contender. Or Oregon.

Texas is all in, though. So is Oklahoma, Oklahoma State and Texas Tech. The rest of the league is getting ready, too. Assuming everyone stays healthy, the Horns will get a chance to dodge tortillas in Lubbock, go wild in the Red River rivalry, host those “Horns Down”-loving Mountaineers and make two trips to Kansas this season.

Missing out on a revenge game against LSU is true a disappointment. Considering how college scheduling works, Herman will be on Medicare when UT finally goes to Death Valley. But canceling one game beats no football at all, right?

“There were times during the summer, even going into fall camp, that we didn’t think we were going to see game week,” defensive end Joseph Ossai said. “We’ve been working hard to abide by protocols and make sure we were able to make this happen, make this possible.”

Ossai said he applauded every single person associated with UT athletics “from the medical team, to the players, to the equipment mangers helping us to stay safe and stay clean.”

Now, the Horns can focus on these violent delights between the lines.

First-year defensive coordinator Chris Ash unveils his four-man defensive look against the Miners, a woebegone program that’s won only two games in three seasons. Ossai will be the focal point, having been moved from linebacker to a rush defensive end called the “jack.” Coaches have talked up the depth along the defensive line, but the group’s production capabilities are still in question. A handful of sacks and tackles for loss against a n overmatched unit from El Paso would be a nifty start.

Linebackers Juwan Mitchell and DeMarvion Overshown need to get off to a good start. Same goes true for safeties Caden Sterns and Chris Brown. Time for Josh Thompson and D’Shawn Jamison to show why they won the hot-and-heavy competition at cornerback.

Ash teaches a rugby-style method of tackling, which is more about throwing your shoulder into the ball carrier as opposed to leading with your head. That was old school; this is new school, Ash said. As always, nobody cares about the labor pains. Just hold up the baby. And knock the ball loose while you’re at it.

“We do a ton of tackling drills. We have done some live work here, not enough to tell you who is consistently going to be the best tackler,” Ash said. “But I think we’re in a pretty good spot with our overall team tackling.”

Offensively, the Horns have plenty of electric firepower. Tesla’s new Gigafactory hasn’t been built in Austin yet, but the first Cybertruck that rolls off the assembly line will be as sleek as quarterback Sam Ehlinger.

First-year offensive coordinator Mike Yurcich can run Keaontay Ingram, Roschon Johnson, Bijan Robinson and Ehlinger all off tackle and feel good. As to whether any of these receivers can catch the ball in traffic, shake a defender and run to the county line, well, all good things come to those who wait. Coaches hope, anyway.

“We’re going to see with competition who steps up and production will be rewarded,” Yurcich said.

Jake Smith will not play in the opener because of a hamstring injury suffered during a mid-week practice, Herman said. He should play against Texas Tech on Sept. 26. That means more time for Jordan Whittington in the slot. Fans know Whittington is an incredible athlete from his days at Cuero. He just hasn’t shown it yet wearing burnt orange.

This offense promises to be an up-tempo attack, although Texas fans have been sold that before. The Longhorns had the second-best scoring offense in the Big 12 last season and still went 8-5.

Coronavirus or not, Herman enters his fourth UT season with a 25-15 record and no conference titles or CFP appearances yet. Is there any kind of mandate for 2020? The beauty of this season will be in the eye of the beholder.

Let’s quibble over the minutiae another day. Come Saturday night, just enjoy there’s a game at all. Hopefully it’s one of at least 10, maybe even more if the Horns get their way.

“We’re so thankful,” Ossai said. “We’re grateful to be here and we’re ready. Everybody’s fired up. I’m ready to go out and do some work.”