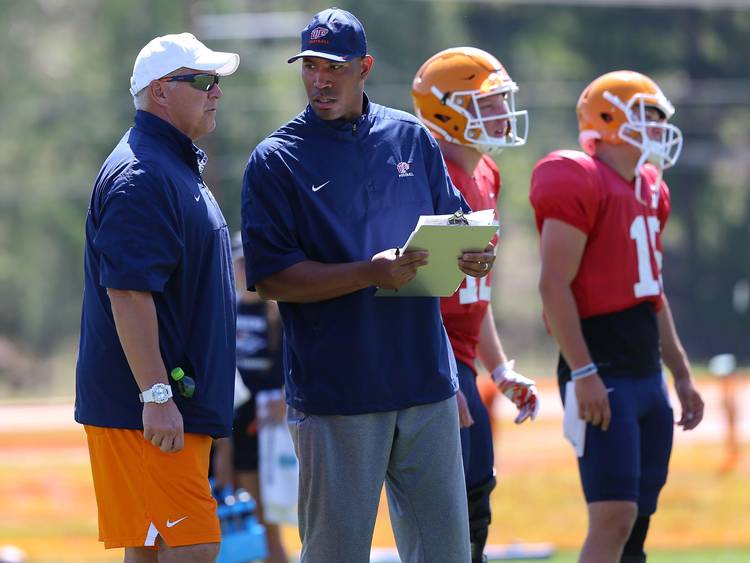 Specifically, Nealy recalled a Herman pep talk that launched him on a path toward a reunion at Texas’ Darrell K. Royal-Texas Memorial Stadium on Saturday.

Before Nealy came to UTEP in 2018 as director of player development, before he returned to Texas State to get his degree in 2017, he was adrift and in his own words depressed. That’s when his wife Tiffany got on the phone and called Herman, who coached Nealy at Texas State in 2005.

“Tom was the first person my wife called when we hit a point in our lives where I was having a hard time figuring things out,” Nealy said Thursday, on the eve of UTEP’s trip to Austin to play Herman’s Longhorns.

“I didn’t know what I wanted to do with my life, my career. I remember laying in my bed, in a dark room with the lights off, I was in bed almost a week depressed. Tom was the first person she called.

“I got a call from (UTEP coach) Dana Dimel. I credit a lot of that to Tom. I was at a rough point in my life and he said the right words to get me going again. That’s who he is. I thank him, I thank my wife for knowing the right person to call. We always had a special connection.”

That connection began at Texas State in 2005 when Herman got his first college coordinating job and inherited the senior quarterback Nealy. They helped Texas State to its most successful season ever, as Nealy was the Southand Conference player of the year for a national semifinalist team.

When Herman was asked about that at his Monday press conference, he went into a minute-long speech.

“Barrick made my career, I’m not ever going to deny that,” Herman began. “This was a young man that had star potential written all over him, and it was kind of the right place at the right time for both of us. I’m forever indebted to him, his wife, Tiffany, his children. He has been a godsend in our lives, the Herman family life. And Barrick and I have stayed very, very close over the years.”

Said Nealy: “That was humbling. My phone started blowing up right away, I got all kinds of voice messages and text messages. It was nice of him.

“I’d like to think we helped each other. The stars aligned. He was stepping into a coordinator position for the first time and calling plays, I was a guy who always had plenty of talent but needed someone to push me over the edge. It worked out, he was that guy for me.

“We kind of helped each other. There were times, third and long, he’d look at me and say, ‘You got this. You go.’ I felt some responsibility to cover him and I did a pretty good job, and visa-versa. We leaned on each other.”

The return to Austin represents some interesting symmetry. Nealy began his playing career at Houston under Dimel, the head coach at the time, and the last game Nealy played for the Cougars was at the University of Texas when he blew out his knee in 2002.

Dimel was fired at the end of the year and Nealy transferred to Texas State. They always kept in touch, which gave Nealy a career path when Dimel got hired at UTEP in 2018 and made Nealy part of his first staff.

Now Nealy has been promoted to a position coach and says he puts a lot of what he learned from Herman to use.

“With everything going on outside of football, that’s important. That’s the most important thing I leaned from Tom, the relationship with the players, that first I’m their friend, then I’m their coach. You don’t hear that much, but I think it works.

“He’s the ultimate player’s coach, he’s all about people. If you know Tom, you know that’s what’s been the key to his success.”
Nealy has spoken with Herman this week and definitely plans on hunting him down at some point before kickoff Saturday night.

“I’ve been around great men and great people,” Nealy said. “It’s going to be pretty cool to be on the field where I had my first major college injury, with two coaches who have been with me throughout this entire journey.

“I want to get a picture for sure.”

Texas soccer preview: If there’s a way to get closer in a pandemic, the Horns may have found it

With Texas gameday scaled back due to coronavirus, Austin economy will take a hit