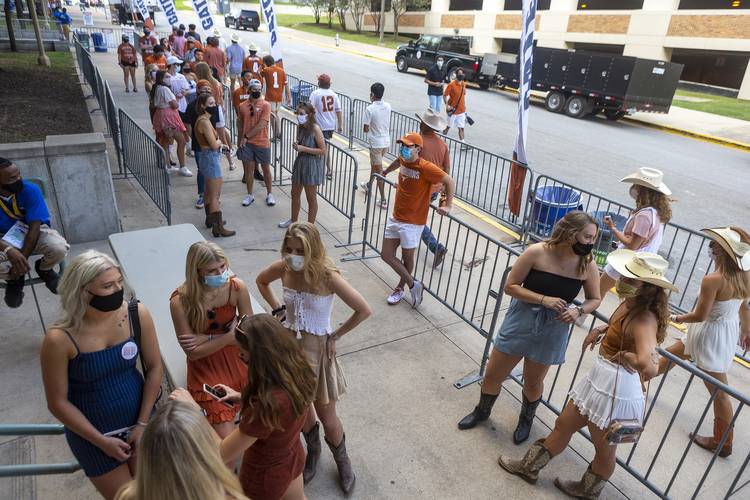 University of Texas students wait to enter Royal-Memorial Stadium on Saturday aftrnoon for the Longhorns’ season opener against UTEP. Stadium capacity this season is being capped at 25%.(Stephen Spillman/For Statesman)

Cody Woolley recalls seeing up to 20,000 Texas fans drinking beer and getting fired up on Bevo Boulevard before Longhorns football games.

“You could just feel their energy up and down the entire road,” Wooley said on Saturday, looking at the empty street during 92-degree afternoon heat, just steps away from Royal-Memorial Stadium.

Wooley, an operations manager for Central Texas Valet, had a different view on Saturday. The 200 people who stood on the sidewalk outside the premises were stadium workers — ushers, vendors, ticket takers — preparing to begin their shifts.

There were no burnt orange-clad fans, no band members, no traffic lines, no Bevo, no burgers on a grill, no students having fun roughly three hours prior to the UTEP-Texas season-opener.

By contrast, Woolley recalls shoulder-to-shoulder revelers when UT played host to eventual national champion LSU last September, a game that drew more than 100,000 spectators. And he remembers how some tailgaters would arrive as early as 6 in the morning for a night game.

Texas opened its season Saturday evening against UTEP. But there were no large gatherings and they have been banned for the season. A group of six UT police and Travis County Sheriff’s officers, stationed beneath a tent near the stadium, looked relaxed while eating barbecue sandwiches as sidewalks remained largely empty.

This was not the game-day experience that Texas athletic director Chris Del Conte, now in his third year, was hoping to see, but there are no other options while the coronavirus pandemic grips the country. Everyone must wear a face mask. There were no pregame concerts and the stadium would be filled to 25% capacity, but at least there was a game play.

A few blocks away, Scholz Garten had a modest-sized outside group of patrons. Dining in a shaded area, they enjoyed burgers and college football on TV screens and appeared to be having a good time. All employees wore masks and there were multiple signs asking customers to be courteous of others..

When asked about the lack of patrons, Scholz co-owner Dan Smith said, “That’s not what we’re focused on. We just want people to enjoy the Scholz’s experience.”

Business at his lot on San Jacinto Boulevard was a bit slow. By the middle of the afternoon, a total of two cars had parked in it. He expected that number to swell to about 20 by the end of the day. But on a regular game day in previous years, some 300 cars would file through.

The Texas Team Shop, which sells Longhorns merchandise adjacent to the stadium, was unusually empty, too. Shop associate Stafford Lott, who was working his first Texas game, said he didn’t have any business for the first three hours of operation.

“We had two people look at some stuff,” Lott said, “but they said they would come back later.”

Some downtown businesses appeared unfazed by the lack of game-day patrons. Two popular food trucks — Don’s and Cafe 4 U — had lengthy lines at their San Antonio Street locations..

David Simmons, 35, said he had no plans to attend the game after giving his order for Vietnamese food. He planned to watch the game from the comforts of his own living room.

“What I really will miss most is all the fun I have when tailgating outside the stadium,” Simmons said. “I guess I’ll just have my own bar at home.”

Del Conte has said safety comes first. Several conferences have already canceled or postponed their seasons. Wearing a mask and keeping proper social distance is a small price to pay during a season that’s beginning but is not guaranteed to have an end.

Despite the absence of a festive game-day experience, Woolley said there was at least one positive development on Saturday.