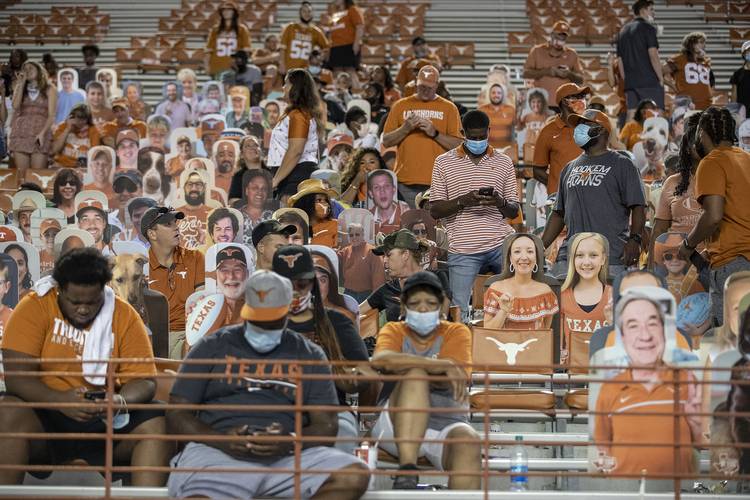 Many fans who streamed out of Royal-Memorial Stadium late Saturday night said something was missing from the Longhorns’ 59-3 season-opening win.

“We had fun, but it wasn’t a full-meal deal,” said Kim Heffner, who has attended Texas games since she first arrived on campus as a freshman in 1981.

She may have been speaking on behalf of the 15,337 fans who filled the 100,000-seat facility. The festive game-day atmosphere that customers are accustomed to seeing was flat. Instead of playing host to tailgate parties and revelers looking to enjoy everything that college football offers, Bevo Boulevard was largely a ghost street for most of Saturday.

Despite the small crowd, UT freshman David Wolfe said he had a great time attending his first Longhorns game.

“You could tell the hype in the air would be 100% different with a full crowd inside the stadium,” Wolfe said.

Fans must wear masks at all UT sporting events this year, the school recently announced, and ushers did their part in reminding them to comply with strict guidelines. During this era of COVID-19, there were multiple signs throughout the stadium reminding them to stay safe. Ticket holders were assigned specific gate entries to avoid bottleneck situations.

Houston’s Mikal Frazier, who was attending her first Longhorns game, said she and her family did not feel “the full force” of college football while sitting in the upper deck. “We should have gotten closer to the action instead of just staying in the nosebleed section all night,” he said.

UTEP fan Jaime Martinez said rules for wearing masks were stricter in Austin than in El Paso. During UTEP’s 24-14 victory over Stephen F. Austin the previous week at the Sun Bowl, there were no complaints when fans — who were already social distancing from each other — lowered their masks after getting to their seats, he said. On Saturday, he and his friends were consistently reminded by stadium ushers to keep their mouths and noses completely covered.

James Johnson, 30, said one benefit to a small crowd was shorter concession lines. When asked if he will return again this season, he  said, “I texted someone before the game even started that I do not miss any games. I’ll be back.”

Luciano Hernandez, who lives in San Antonio, called the night “a good experience” and applauded stadium personnel for courteous service. He said he felt safe, noting there were lines in restrooms and that concession stand vendors were prompt and organized. To help with prompt service, the university has organized mobile ordering on the Texas Longhorns app.

Steven Guerrero, who checks bags as fans file into the stadium, said “there are so many rules” for the season. Some fans complained they were not allowed to bring in their own water or use mini fans on night that temperatures peaked in the mid-80s.

Most fans arrived within an hour of game time, partly because tailgating has been banned this year. San Jacinto Boulevard, which normally has more than 10,000 fans enjoying pregame festivities such as concerts, remained mostly unoccupied for most of the afternoon.

About a dozen young men and women who operate downtown pedicabs spent the night hoping for business to improve. Dane Hurt, who has been shuffling fans around town for three years, said he normally makes up to $700 a night when the Longhorns have a home game. Midway through the third quarter of Saturday’s game, Hurt had pocketed a total of $60.

No. 14 Texas 59, UTEP 3: A cathartic experience for all as Longhorns steamroll Miners