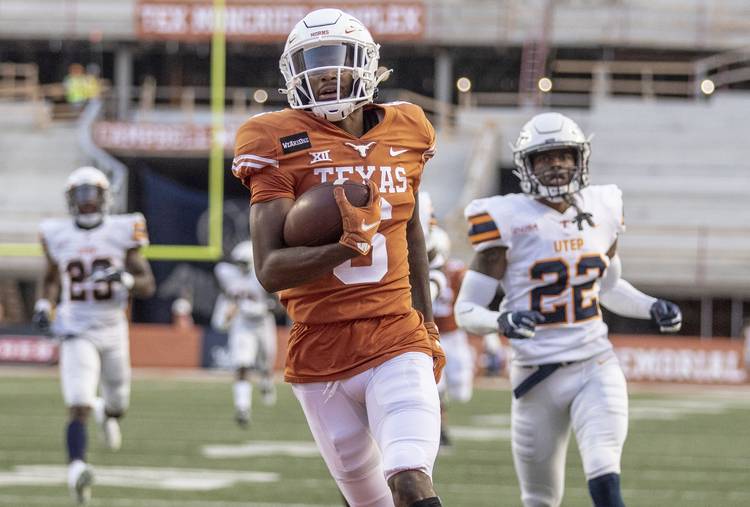 Texas receiver Joshua Moore runs into the end zone for a 78-yard touchdown against UTEP. It was the longest UT touchdown pass since 2016. (Ricardo B. Brazziell/American-Statesman)

There were 146 snaps taken in No. 14 Texas’ 59-3 win over UTEP on Saturday. Here are five that ended up making a big difference:

In a game that wasn’t expected to be competitive, the Longhorns wasted little time in establishing their dominance. On the very first play, Texas quarterback Sam Ehlinger connected with Joshua Moore for a 78-yard touchdown pass.

Really, Texas should have opened with a gain of around 10 yards. But UTEP had a cornerback playing yards off of Moore on the slant route, and a lurking safety then whiffed badly on an attempted tackle. Those lapses let Moore streak into the end zone.

Texas has now scored on its first drive of the season in three of the past five years. This also marked the first time since 2004 that UT scored on a campaign’s first offensive snap. Sixteen years ago, Cedric Benson scored on a 38-yard run against North Texas after a penalty on a punt return set the Longhorns up for a quick strike.

Josh Thompson with the hands.

Defending UTEP’s Walter Dawn Jr. in the second quarter, Thompson separated from the receiver and leaped to grab the ball while ranging backward. A three-time starter at nickel back, Thompson made his first start at cornerback on Saturday. He later left the game with a lacerated ear.

3. From turnover to touchdown

A graduate transfer from Michigan, Tarik Black was one of UT’s three starting receivers. Only Moore (6 catches, 127 yards) exceeded Black’s five receptions and 80 receiving yards. Additionally, Black was one of seven Longhorns with a touchdown catch.

On the fifth scoring drive of the first half, Texas looked for Black on all three snaps. Black caught each targets, ending the possession with a 5-yard score.

That touchdown, though, almost didn’t happen. Black scooted 31 yards on his second catch of the drive, but he fumbled while fighting for extra yardage. Longhorns tight end Brayden Liebrock managed to wrestle away possession of the football in a pile of Miners.

With six seconds left, Texas put an exclamation point on the first half when Ehlinger found Kai Money for a 6-yard score. The touchdown was the first for Money, a Brownsville native who walked onto the football team in 2019. The last offensive touchdown scored by a player who joined the Longhorns as a walk-on was recorded in 2005.

Money’s touchdown gave Texas a 45-3 halftime lead. After starting the drive at its 25 with 1:39 left, the Longhorns’ two-minute offense needed only six plays — one of which was a 43-yard catch by Jordan Whittington — to march down the field.

“Definitely great to get that (two-minute drill) work,” Ehlinger said. “It’s always different practicing it than when you actually get it in a game.”

Texas took Ehlinger out after its first possession of the second half. Casey Thompson then a chance to showcase his skills.

The third-year sophomore directed three drives. Two of those ended with touchdown passes to Marcus Washington and Brennan Eagles. Those were the first collegiate touchdown passes for Thompson, who had attempted only 12 passes in his first two years.

Hudson Card, a freshman from Lake Travis, closed out the game. On a fourth-down attempt from the UTEP 8 in the fourth quarter, Card was unable to complete his only pass of the night.

Fan reviews out of the first Texas game? It was fun, safe — but something was missing

After five difficult months, No. 9 Texas allowed to relax after UTEP rout — for one day, anyway