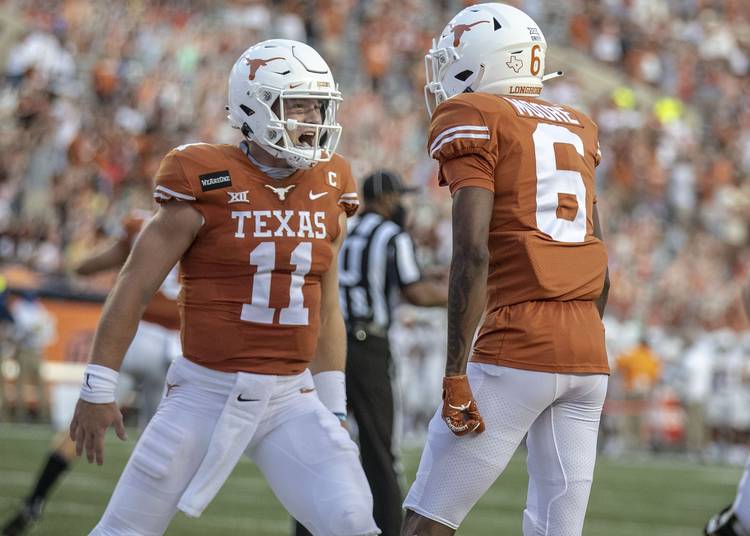 Revisiting our five pregame questions that were facing the Longhorns ahead of Saturday’s 59-3 season-opening win over UTEP.

1. How much rust did Texas have to shake off?

The Horns put up nearly 700 yards of total offense, scored the most points since a 2015 win over Kansas and produced the longest touchdown pass since 2016 on the very first play of the game. Not bad for a team that hadn’t played since Dec. 31 and had no spring practices or a spring game. Texas has now scored on its first drive of the season in three of the past five years. As openers go, this one went about as good as you could have hoped. Now the Longhorns get a week off to prepare for Big 12 play.

2. Who led Texas in rushing?

Keaontay Ingram. But only technically.

Each of the three Texas running backs had something to be happy about. Ingram’s 44 yards on nine carries led the team, but Roschon Johnson (8 carries for 38 yards and a touchdown) got the start and five-star freshman Bijan Robinson had seven touches and flashed on a 29-yard run in the second half. We wondered how Texas would handle the workload. Turns out the Horns decided to spread it around.

3. Who was Sam Ehlinger’s top target?

The third-year sophomore was targeted a team-high seven times and had six catches for 127 yards and the long 78-yard touchdown. Moore didn’t exactly come out of nowhere, but he had played in only six career games in two years; he redshirted in 2019 after after missing all but six games of 2018 with an injury. He and Michigan graduate transfer Tarik Black (5-80-1) combined for 13 targets. That’s Devin Duvernay-type of attention.

4. Did Texas limit the big plays?

The Longhorns gave up nine plays that went 50 or more yards last year, but the Miners didn’t get anywhere close to that. Justin Garrett hauled in a 30-yard pass, but that was it. The last time Texas played UTEP, Miners running back Aaron Jones — now with the Green Bay Packers — scored on a 51-yard touchdown run, their only points in a 41-7 Texas win.

As should probably have been expected. Not all students were wearing masks, but everyone else was. The Longhorn Band wasn’t there. “The Eyes of Texas” was still played, but it was over the public address speakers. Fans in the stands were socially distanced. The crowd of 15,337 was even smaller than the projected 18,000-20,000 that UT officials were talking about on Thursday, which was even smaller than the original projected 24,000-25,000 based on 25% seating capacity math. Still, Moore’s first-play score and the blowout win helped with the energy level.

Texas’ Ehlinger was ‘disappointed’ by his performance, but Horns QB sets career-high marks

No. 14 Texas 59, UTEP 3: A cathartic experience for all as Longhorns steamroll Miners